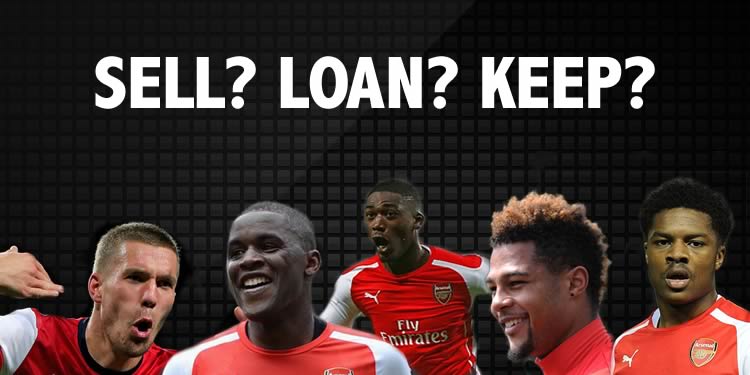 One of the interesting things about last season was the how the balance of the squad was changed from the way we began the campaign to the way we finished it.

We all knew we were light in defence, but we were ridiculously top heavy in August. By May we’d added a defensive midfielder in Francis Coquelin, a new centre-half when Gabriel arrived from Villarreal, and even though we lost Mathieu Debuchy to two long-term injuries and Calum Chambers was taken out of the firing line, we had more than enough to see us through and, of course, win the cup.

It felt like a squad that had enough in every area of the pitch without too many options anywhere. You might even argue that someone like Tomas Rosicky was a victim of having the depth in midfield we’ve been calling for for years. He was marginalised, not to the detriment of the team either (for the most part), and his expanded comments from his interview this week show just how frustrated he is with things.

But then isn’t that exactly what we’ve all wanted? Rather than scratch around for players who weren’t banjaxed by injury in one way or another, we’ve kept people fit and the consequence of that is some of them aren’t going to be happy with the amount of playing time they get. There are some whose stock has risen through increased competition, others haven’t quite managed it, that’s just the way it goes.

Anyway, the balance was achieved not just with the ‘arrivals’ but also departures. What of those players who were on the fringes. What will happen to them? Here’s my thoughts on that – bearing in mind this is what I think will happen, rather than what I’d do myself.

Had Giroud not broken his leg last August chances are he would have been sold before the transfer deadline. He barely got off the bench until January despite the fact the team was struggling, a real sign whatever faith the manager had in him had dwindled. He went to Inter Milan on loan in January, scored once, and didn’t do a great deal to suggest the decision to let him go there – met with cries of outrage from some quarters – wasn’t anything but the right one.

I think it’s inevitable he’ll be sold this summer. He spoke this week about being open to staying, but I don’t think that’s going to happen. Trying to find the right suitor might be an issue after his indifferent campaign and he’s got one more year of reasonably large wages on his Arsenal deal, but I doubt very much he’ll be with us come the start the season.

He signed a new deal before his loan spell at Villarreal suggesting the manager wasn’t 100% closing the door on him. He played 22 times for the Spanish side, scoring just once, and to me this loan spell was one in which we were looking for him to make a bigger impact than that.

The emergence of Francis Coquelin has cast a long shadow over every other player we have out there. Everything we thought we knew has been turned upside down by the way he came from the wastelands to become an influential first team figure – but I suspect stories like his will remain extremely rare.

Real Sociedad keeping an eye on him is interesting, we’ve had dealings with them before over Carlos Vela, and you can’t help wondering if it might be the best thing for him. At the very least he’s likely go on loan again for the season, and if the right offer comes in I think we’ll sell.

Another one whose loan was supposed to give him experience, but like at Arsenal injury played a part and although he scored once in the FA Cup is still to get off the mark in the Premier League. When you look at our squad now, with Giroud, Alexis, Walcott and Welbeck all better options up front, it’s hard to see how he’s going to develop as a player if he stays with us.

However, I think he’s one of those that Arsene Wenger sees something in that most of us don’t. I’d put money on him going out on loan again, this time for the season, but I’d be surprised if we sold him this summer.

His reluctance to sign a new deal last season was based on the fact he felt he wasn’t getting enough chances at Arsenal. His late season loan spell at Nottingham Forest showed why he’s still got a lot of work to do before that particular door opens for him. His new contract means we’ve got time to let him develop elsewhere, and a season long loan to the Championship, or a lower-tier Premier League team, seems the most likely option.

This will be an interesting one. He was beginning to make the breakthrough into the first team squad when injury struck and kept him out for the best part of a year. He doesn’t appear quite as athletic as he used to be (shall we say), but will be at the U21 European Championships so could be in decent shape for the start of the new campaign.

He’s a player the manager rates highly, but like others may need some regular football elsewhere before he makes his Arsenal comeback.

So there you go. What will be most interesting is how the manager looks to add to the squad in this summer without causing the kind of imbalance that affected us last time around. There are other senior players who could well be affected too, but we’ve got lots of time to consider that as the summer goes on.

Right, that’s that from me for today. Until tomorrow.