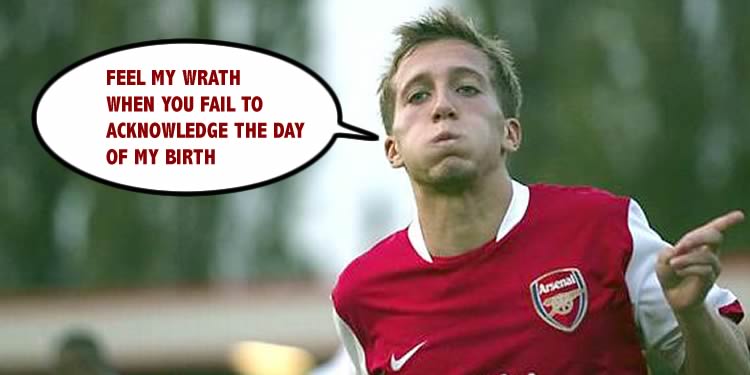 There was no Cech announcement yesterday. That’s all right. I was out doing stuff in real life so I didn’t notice. I saw a man vaping in a most unsatisfactory manner. I find those things ludicrous. Smoke or don’t smoke but let’s not pretend these ballpoint pens with a sucky tip are anything but an affectation.

But now I feel like I’m going against my live and let live principles. I mean, it doesn’t make any difference to me if some bloke wants to stick one of these things so far into his mouth it looks like he’s trying to scratch his punch-bag thingy just so he can remain addicted to nicotine. But when he ‘exhaled’, as if he’d taken a pull off his first Gitanes of the morning, it does make you, just for an instant, want to go over and trip him up then stand over him going ‘That’s what happens!’.

Just for a moment though, and I would never do that because I’m a firm believer that people should just leave other people alone and the world would be a much happier and more successful place. Look after your own business, don’t worry about that bloke over there who’s not doing anything to bother you, and have a fucking sandwich or something.

But then you see headlines like this on NewsNow from Sky Sports:

Does the person who wrote that deserve to be left alone? Probably. It’s just some guy or gal in an office desperately trying to fill the quota of articles they’d been given to do that day, scraping the very bottom of the barrel. Fresh out of college, with a degree in journalism, full of hopes and aspirations and dreams of being the next Brian Glanville, but the ‘wow’ factor of a job working for Sky Sports is waning.

But what can they do? They are mere slaves to the system. The system that takes a footballer singing a song on his Instagram and allows them to write ‘Alexis Sanchez joining One Direction’ and people just roll their eyes because we’re so used to it. Back in the day there were standards, benchmarks, criteria, and defined measures of worth.

Somebody might say “I’m not writing that. It’s completely shit”. No longer. No longer. If you think I’m exaggerating about this, bear in mind this is the week when ITV Football (remember they used to have rights to the Premier League and Champions League and stuff), wrote the following article:

Arturo Lupoli started out at Arsenal as a teenager, but things didn’t go to plan as he was last seen at Frosinone Calcio, who don’t seem great.

Today the Italian celebrates his 28th birthday, something we should all acknowledge.

That’s it. That was the whole piece. To be fair, it’s pretty informative. We now know Lupoli is 28 (or is that 29?), that Frosinone Calcio ‘don’t seem great’ (we could probably do with a yardstick here to help us assess that), and that his 28th birthday is ‘something we should all acknowledge’.

Have you told your kids today that Lupoli was 28 during the week? Did you, in the middle of an important business meeting or conference presentation, stop and tell everybody of this earth shattering fact? If not, shame on you, because it’s something should all acknowledge. I went to Arsenal.com searching for the swish video celebrating this momentous occasion, and there was nothing there at all which is firstly a disgrace to our great club, but also a shame on them.

The kind of shame that should see them paraded through naked through the streets of N5 while a stern-faced nun rings a bell shouting ‘shame … shame’, and the rest of us throw rotten fruit and buckets of piss over them.

Where were the stats pieces on Lupoli? The ArsenalFanTV interviews with all the Gooners who were so enthralled by him as a player? The blog posts about how Lupoli was actually the best player we’ve ever had but for the sake his career Arsene Wenger (who on the 7th day created God), let him go run wild and free in the Cottian Alps?

Arsenal fans make me sick with their laissez-faire-weather support sometimes. Maybe if we had all acknowledged Lupoli’s birthday, instead of remaining blissfully unaware of it until it was thrust into our consciousness as a piece of the very worst kind of clickbait imaginable, Petr Cech would have signed. Along with his mate Bob Lollipop, Morgan Schneiderlin, and a ‘World Class Stricker’.

See what you’ve done? I hope you’re all happy now.

* Two days later Metro took the Lupoli article and used it to link him with a £34m move to Man City because people there also have birthdays.