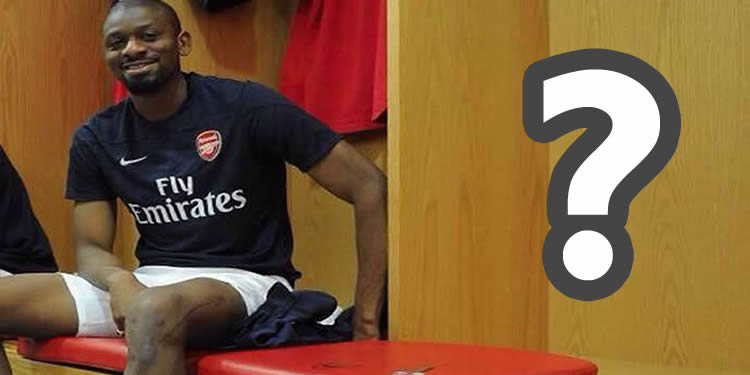 So, yesterday the Premier League released a list of players  from every club that are available for free transfer this summer.

Ryo Miyaichi was on the Arsenal list, along with youngsters Jack Jebb, Semi Ajayi, Austin Lipman, Brandon Ormonde-Ottewill (that’s the sound of the Arsenal Gent weeping into his rag of ether), and Josh Vickers. Also on the list was Abou Diaby, leading people to believe that Arsenal had called time on his career at the club.

That such a decision would have been made can hardly be a surprise. Diaby played just 67 minutes of first team football last season, in a Capital One Cup defeat to Southampton in September. The previous season he managed just 16 minutes, his only appearance was in a 2-0 win away at Norwich when he came on for Tomas Rosicky.

When Diaby appeared on the list as his contract expired, and Mikel Arteta (in the same position contractually) didn’t, it seemed logical that the club had made its mind up about the Frenchman’s future, and that even though the Arteta situation is still somewhat up in the air by all accounts, the captain wasn’t being discarded.

However, last night journalist Bruno Constant (well placed when it comes to the French players at the club), Tweeted this:

#Diaby hasn't been released by #Arsenal. Out of contract. But verbal agreement with the club. Talks ongoing for a new contract.

Seasoned Arsenal, and Arsene Wenger, watchers shouldn’t really to be too surprised by this either. It’s clear that the manager loves what Diaby can do as a player when fit. This performance against Liverpool at the start of the 2012/13 gives a very clear picture of what he can do. It’s a genuine shame that injury has robbed him of the chance to do that more often and, of course, us of the chance to watch him do it.

The problem is that he’s just never fit. I have every sympathy in the world for him. Those that say his pay-packet makes up for the fact he can’t play football miss the point entirely. He’s not some sponger who is happy to sit around and pick up wages – he’s a guy who desperately, desperately wants to play football for his club but has been unable to do so because his body lets him down. The fact that he’s on the books makes no impact on anybody else from a financial point of view.

If you love football and can’t play it, whatever level you’re at, it’s an immense frustration. At 43 I’m bummed out if I can’t make my game of 5-a-side on a Friday or the increasingly slow-paced 11s on a Tuesday. As a professional, to have worked so hard to get to a club like Arsenal, then not be able to play must be gutting in the extreme.

Yet nobody could accuse Arsene Wenger or Arsenal of not doing right by him. We’ve stood by him when other clubs would have washed their hands of him years ago. He was given a new contract off the back of the most sustained period of fitness he’d enjoyed, but since then has suffered injury after injury to the point where in the last two season he hasn’t even played a combined total of 90 minutes.

From a sporting point of view, there’s really no way you can justify a new deal. People speak about pay as you play arrangements, but they’re extremely rare. Now, maybe he’d be open to that, and if he is being offered a new deal you can be sure it will be on reduced terms. If that’s the case, and if retaining him has no impact on what our summer recruitment plans are, then you can just about make a case for it.

What you cannot do is count on him to provide the required squad depth you need for a title challenge, or to go further in the Champions League. That’s not to sound harsh, but that’s the simple reality. To be fair, it’s been a couple of seasons since that was the case, since he was a player whose absence was genuinely felt. We’ve had more options in the centre of the midfield and when he’s been out it’s not been a case that we’ve been speaking wistfully of his return.

But with question marks of the future of three experienced players (Arteta, Flamini and Rosicky), midfield feels like an area we could do some business in this summer. That means Diaby’s chances of playing, if fit, are slim. And if he is fit to play, having missed so much of his career, wouldn’t he better off at a club where more regular opportunities are open to him?

Again, he might feel like he owes the club something for the way he’s been treated and looked after, but this feels like a natural time for both parties to call it quits. I guess we’ll see what happens over the next few weeks, his contract expires officially on June 30th, so you’d imagine any extension would be made by then. One to keep an eye on.

None of the others on the list are likely to be offered new terms, indeed Ormonde-Ottewill has signed for Swindon already, so good luck to all of them. Ryo Miyaichi, in particular, will be missed by me, simply because he provided one of my favourite ever moments in Arseblog comment history:

And that’s about that. The only other news is Jack Wilshere ‘accepting’ the charge for calling Tottenham shit, his punishment is expected to be a fine, and I think we can all live with that.