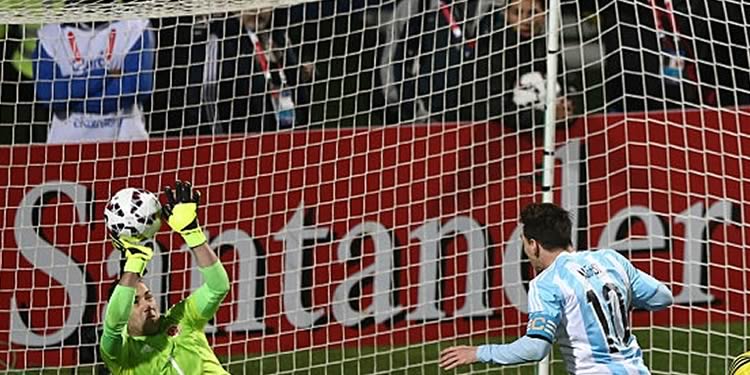 Lots of people are Tweeting me this morning wondering if we have to buy Petr Cech at all because David Ospina was so good last night for Colombia against Argentina. Although Messi & Co eventually made it through to the semi-finals via penalties, the Arsenal keeper was in fantastic form by all accounts, making some great saves – like this double one from Aguero and Messi:

I didn’t see the game, due to being fast asleep, but by all accounts he gave a tremendous performance. And I don’t suppose that’d be any real surprise to the manager who bought him off the back of his excellent displays in the World Cup in Brazil. He seems to thrive in international tournaments.

Whether it does anything to change his mind with regards to his future at Arsenal is another question though. Despite the fact I think we should retain Szczesny, Ospina seems a more natural number 2 keeper, but at the same time, having been a regular for Nice and having usurped the Pole last season, I think his reluctance to play that role might be one of the things people are overlooking in the discussions about where he might play next season.

I can’t imagine Arsene Wenger would be anything other than delighted to keep him at the club, but with Cech’s arrival and reported fee making him the clear number 1, perhaps it’s Ospina who is determined to leave so he can play week in, week out somewhere else. And if that’s the case, who can blame him?

There have been plenty of goalkeepers in the past who have been content to play second-fiddle, pick up their wages, and spend most of their career on the bench. Ospina doesn’t appear to have Stuart Taylor syndrome and, as a footballer, wants to play football. If that means he has to leave a club after one season, then maybe he’s prepared to do that. And you can’t really argue if that’s the case.

Speaking of Cech, reports from the BBC’s David Ornstein say a fee and personal terms were all agreed, and that the Chelsea keeper was undergoing a medical yesterday. That’s usually the final step – although in some cases, like Mikel Arteta on deadline day 2011, it doesn’t happen at all due to restraints of time.

So, fee between Chelsea and Arsenal. Tick. Personal terms between Arsenal and Cech. Medical, I guess tick. Now? We wait for the move to become official. I still remain suspicious of Chelsea simply because they’re Chelsea, but it looks like it’s all sorted. For those whose anxiousness will see them refresh the official site or Twitter constantly until it’s 100%, Arsenal won’t do it until everything is signed and completed. That’s the way of it, so there are probably better things you could do with your day today. Or tomorrow. Or Monday, or whenever it is. If it is at all.

We have a whole season starting in a few weeks time when we can be driven by nerves, testiness, agitation and overwrought, squirrelly trepidatiousness, so I’m arsed if I’m going to start this early. We have enough to worry about when the football begins again to get bent out of shape because a transfer doesn’t go through quite to the schedule we might like.

Time to go outside for a while folks. Which is pretty much what I’m going to do now. It’s warm in Dublin, the sun looks like it might come out, and the last thing you need me to do is stretch this thing out to include some stuff from Danny Welbeck about how we’ll be stronger next season. I mean, we’d better be or we’ll be very CROSS and IRATE and things, but it’s not even July yet.

I have a large dog that would like to go out. If you don’t, you should get one. Or a small dog or a medium dog. Any kind of dog because dogs are great.