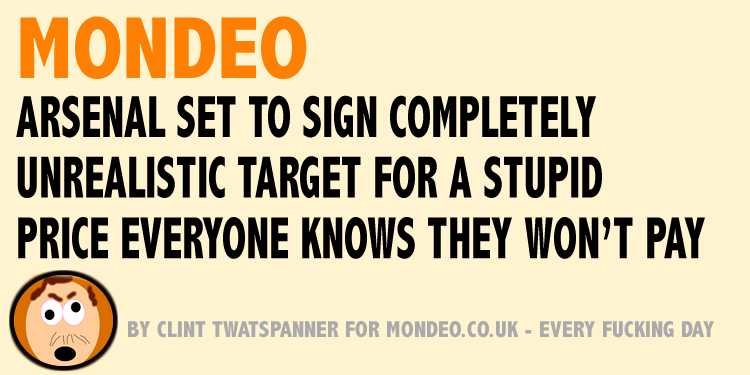 Morning all. It’s a beautiful day. The sun is shining, the sky is blue, the tumbleweeds are tumbling … oh.

Yes, there’s only so long they can manage to stretch out the ‘Petr Cech move complete’ or ‘Arsenal agree terms with Cech’ or ‘Chelsea and Arsenal agree fee for Cech’ or ‘Cech Cechity Ceching Cechification Cechly Cech’ stories without running out of currency.

We’re now at the stage where we all know something could happen, and probably should happen, but it’s just a matter of waiting for it to actually happen. There’s still a chance it might not, simply because that’s the nature of transfers.

We had an interesting question on yesterday’s Arsecast Extra in which we were asked what were the most reliable and unreliable sources when it comes to transfer news. The truth is even the best information from excellent sources provided in good faith can end up looking terribly wrong at times. There are people who are well placed and have some insight into what a club is doing.

That can come from various places, of course. Club insiders, agents and managers, even the players themselves who might be friendly with the person writing the story. But the whole transfer industry is based on an inherent precariousness, and subject to changes and last minute shifts in direction that make excellent info redundant at the drop of a hat.

Take, for example, Emmanuel Petit who was at Sp*rs before signing for Arsenal. I imagine they felt that as he was in London and talking to them that a move was as close as it gets. However, legend goes he got a call, borrowed some taxi fare from them, came to meet his old boss Arsene Wenger and ended up signing for us – forming that fantastic double-winning midfield partnership with Patrick Vieira.

We only need think back a couple of summers when the Gonzalo Higuain transfer from Real Madrid was on the verge of completion, but at the last minute the price was hiked, we baulked and he ended up signing for Napoli. Things can change very quickly indeed.

On top of that there doesn’t tend to be a lot of middle ground when it comes to how people view these stories. On the one hand you’ve got the people who say “I’m not believing a word of this until I see him with an Arsenal shirt in his hand, lying on an Arsenal bed with an Arsenal duvet on it while Arsene Wenger tattoos a cannon to his right breast singing So Paddy Got Up with Ivan Gazidis accompanying him on the Piany”; and on the other there are those who are so eager and desperate for things to happen that they’ll believe any old shite.

It’s why so many of the sites that peddle complete fiction continue to exist and, in some cases, thrive. Any scrap of objective analysis will tell you that they don’t have any sources or inside information. They have little or no journalistic pedigree. Often they have language and writing skills so rudimentary it would make you weep for humanity itself. Yet they put together a headline with the name of a player you covet with a price tag so ludicrous it can’t possibly be real, then slap a few paragraphs underneath with lazy phrases like ‘It is believed’ or ‘thought to be’ and people lap it up like thirsty dogs.

They do not know anything. They quite literally just make things up or spin some vaguely credible info from elsewhere into something it’s not. You all know where these sites are, who the writers with their oddly shaped heads are, and what they’re all about. Clicks, hits, page views, ad impressions – those are the drivers of the transfer nonsense outlets and there are enough people out there desperate for any news at all that it allows them to continue doing it.

The thing is though, the precarious nature of transfers that I referred to earlier is what allows them to not be written off as the complete shysters they are. Imagine another section of the media that got things so consistently wrong or simply invented their own stories. They’d be ridiculed beyond belief but the vagaries of the transfer industry allow this lot the kind of leeway they need to keep lying to people day in, day out, and people still come back for more.

“It’s not our fault the deal didn’t happen, that’s just the way it works.”

So, what is a reliable source? You’d like to think the big newspapers would have the most credibility, but sadly the good work done by the journalists is being undermined by digital demands. We all know that physical circulation of newspapers is diminishing and there are ever-increasing pressures to make inroads into the online space.

Then you have a case where somebody like Jeremy Wilson in the Telegraph, for example, who is well placed when it comes to Arsenal stories, finds what he does somewhat compromised by the website’s dive into the muddy waters of gossip, speculation and outright fiction.

This was from a few months ago. Arsenal do not, and did not, plan an incredible £64m Isco move, but the headline means people will click. It’s simply completely wrong information, the people publishing it knew that at the time, but went ahead with it anyway. The need to drive traffic to a website now far outweighs the need for accuracy in a story. Such is the modern world we live in.

Understanding and accepting that makes it easier to discern what’s true and what’s not. So too the writer’s background and track record. And an awareness that if somebody writes something that doesn’t come to pass, it doesn’t mean they were just making things up. It’s up to the individual to decide who they think is reliable, based on what they’ve done before, who they’re writing for and so on, but the very thing that allows the nonsense to survive is what can damage the reputations of those who work hard for good stories.

Ultimately, it’s something that engages football fans. In some cases you feel like there’s more interest in what money is spent than what happens on the pitch, but once you can step back and look at it with a bit of common sense (in short supply at times I know), you can usually work out what’s worth reading or not.

If you haven’t heard yesterday’s Arsecast Extra you can check it out right here. Oh, and don’t tell anyone, but Arsenal are thought to be making a £38m move for Gremio starlet Transplantinho. It’s thought the move could be completed as early as next week although work permit issues may complicate matters.

Keep that under your hats.