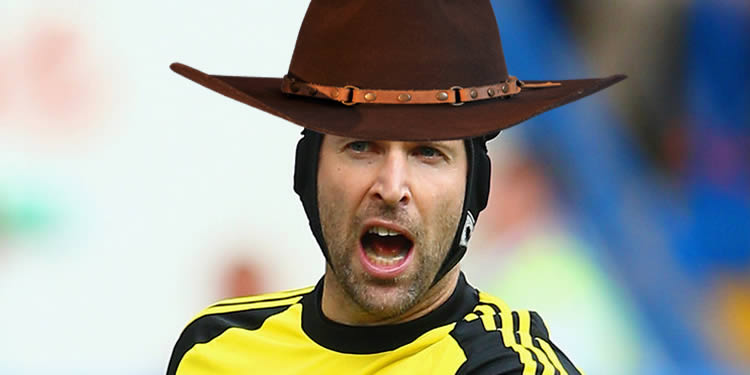 Good morning and welcome to a brand new week, where it’s absolutely nailed on things will start happening. Today’s my last day standing in for Blogger, so I’m quite sure we’ll sign ALL the players today and there’ll be loads to report tomorrow. If that does happen, I’m claiming the assist, and you’re all very welcome.

Starting out, the Petr Cech rumours are again gathering steam, with Sky reporting their “sources” who say the club has agreed personal terms with the totally awesome/completely silly hat wearing ‘keeper (note to ed: delete as applicable on completion of transfer or otherwise). However, they also report that the clubs haven’t yet agreed a fee for his transfer from the history-less oil mercenaries, which would seem to be something of a minor fly in the ointment:

Sky sources report Cech, 33, has agreed personal terms in principle on a switch to the Emirates Stadium but we understand the two clubs are still not close to agreeing a fee and negotiations will continue this week.

The transfer fee is unknown but it will be a cash only deal, with Chelsea’s request to receive a home-grown player as part of the proposed transfer no longer being considered.

I’d usually only stick to quotes from actual people, but the apparent contradiction in the above seems odd to me. If negotiations are ongoing, and the two clubs are not close to agreeing a fee, doesn’t that rather imply it could turn out to be not just a cash only deal, because, you know, negotiations are ongoing? It’s almost as if it’s just more speculation.

The Mirror report that if we do get him, we can form a band. Yes. A band. There really is that little news out there.

Rumoured target Jackson Martinez has apparently spoken of our possible interest (so many caveats in that sentence!), saying:

It’s a big club in one of the best leagues in the world. We have to see if an offer will become a reality or not.

The day we’ll know where my future goes is near. I still haven’t decided, as I’m focused on the Copa America right now.

So yes, we learned lots there. He’s reported to have a £25m release clause in his contract, but after the Suarez debacle, my faith in the mythical release clause is somewhat diminished, so I’ll take that one with a pinch of salt. As ever though, we’ll see what happens.

The Independent say we’re going to offer Jack Wilshere a new, £100k a week deal to fend off interest from Man City, and presumably so he can continue to afford to make statements of fact in public from the roof of open top buses. They think City want to respond to their failure to land a trophy last season by offering us £40m for Wilshere, as part of an attempt to bring more “home grown” players to their team. Their landing Jack seems extremely unlikely, but as tends to be the case in football, stranger things have happened.

In defensive midfielder news, we’re reported as having missed out on Geoffrey Kondogbia, who’ll apparently join Inter, but according to The Sun, a move for Sporting Lisbon’s William Carvalho is on – for £37m. Right. Seems likely. I seem to recall the reason our previous interest in him cooled was due to some complicated, third party ownership arrangement, so it’d be surprising if that were to come to fruition.

Finally for today, some substance, in the form of the latest in the Arseblog News series on the Copa America – Copa load of this – in which our very own Alexis Sanchez got his first goal of the tournament in Chile’s 5-0 spanking of Bolivia, and following on from yesterday’s reports that Colombia defender Carlos Bacca was sent off for his part in a spat with Neymar, Mrs Bacca has said she’d have given Neymar a good slap for his nonsense:

Kudos to Mrs Bacca for her frank assessment, but “many women”? Is Neymar the nemesis of mothers everywhere? And “high heel”? Does she just have the one? Doesn’t that leave her a little…wonky? Maybe I should just shut up before I incur her ire myself.

(Incidentally, in seeking to flog to death my Chewbacca joke from yesterday, I found this one hour video on YouTube of Chewbacca noises. You’re most welcome).

That’s all from me. I shall leave you in the more than capable hands of Blogger, who’ll pick up tomorrow on his return from Barcelona with all the tales and intrigue of his break. The errors, credit, humour (and lack thereof), transfer banjaxing/jinxing/reverse double jinxing, and pure, straightforward nonsense of the past week are all my own. I’ve enjoyed our week together, and look forward to the next time.