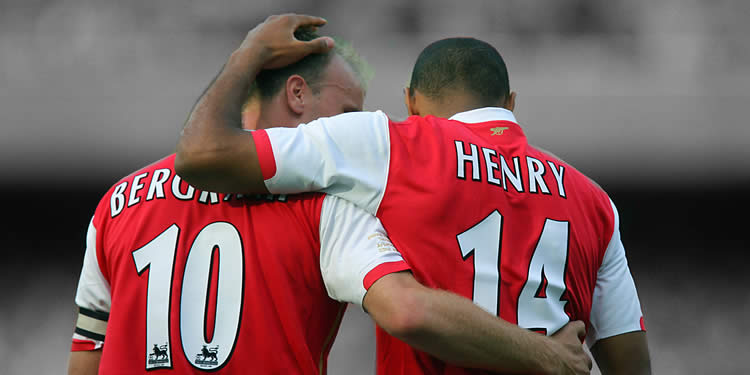 Good morning and welcome to the weekend. A quick round up of stories this morning, as I’m driving from the Highlands to Stratford Upon Avon today, which is exactly how I want to spend six hours of my Saturday.

Having briefly mentioned Dennis Bergkamp in yesterday’s blog, Alan Smith has seemingly taken up the baton, writing a column for the Guardian, describing THAT goal that Dennis scored away at Newcastle in 2002 when he turned Nikos Dabizas inside out and left him bewildered, sitting on his arse, before slotting past Shay Given in the Newcastle goal (as if you needed reminding).

Smudger argues that it was that goal that provided the catalyst for the double in 2002, and whatever the merits of that claim, there’s little doubt it’s one of the best goals ever scored in the Premier League, one that very few players would even have had the imagination to have attempted, and certainly in the top two Arsenal goals I can think of (Thierry’s flick, turn, and volley against United at Highbury being the other). Smith also reminds us that Thierry Henry – who let’s not forget played with Lionel Messi at Barcelona, and who many think is the best player in the history of the game – has previously described Dennis as the best he’s ever played with.

In the midsts of the past decade of mixed fortunes since the Invicibles, and the double winning teams in 1998 and 2002, it’s easy to forget just how special a time that was. Teams inevitably rise and fall, as talent comes together, understandings are formed, and spirit built, but it’s worth remembering that was a very, very special time in the history of Arsenal Football Club, with a number of players at the peak of their game. The somewhat bittersweet truth is that as much as Arsene has transformed the club and the style of play for which it’s now known, we should consider ourselves very lucky if we see a team like that again. They don’t come around very often.

Next up, Carl Jenkinson’s proposed move to Sunderland, with the north east club apparently having had a £2m bid accepted by Arsenal, may still be in some doubt with West Ham chairman David Gold saying he’s not given up yet:

We know we need a right-back and will work tirelessly to bring in Carl. If that does not work out, we have other irons in the fire.

I can well imagine Jenks himself would much prefer to stay in London than move to Wearside, but as he’s competing in the under 21 championships in the Czech Republic, we’ll probably have to wait until he gets back before his future is sorted. If it is the case that Arsene wants to keep him, and given his success and popularity with the Hammers last season, a loan deal back there would seem to make the most sense for all concerned.

The Cech stuff rumbles on, with the Daily Telegraph reporting we’ll offer him £100k a week. Wake me up when something tangible actually happens. Maybe it’ll be today, maybe it’ll be tomorrow, maybe we’ll see the next ice age come and go before something happens.

Finally for today, further to his comments about the quality of the squad the other day, Thierry Henry has been talking about Alexis Sanchez and the X factor (not that shitty bunch of bollocks on the TV):

If you’re an Arsenal fan, we were all waiting for that type of matchwinner. Look at what he did in the FA Cup final and what he has been doing since his arrival. He has been more than tremendous.

We want to see that more and more and I know that he has that in his locker. When you have a guy like Alexis Sanchez, it is the X-factor.

He is the guy who can change the course of a game. I love the way he plays, he plays with his heart and I know the fans love that about him.

And if there’s a man that knows about having an X factor, it’s Thierry Henry.

It’s interesting he again mentions the combination of talent and hard work. Alexis works so hard both on and off the ball. Sometimes he tries to do too much, taking on players when he should maybe trust a team mate with the ball, and sometimes you wonder how on earth he’s going to last a game when he’s running and harrying, chasing the ball every time it’s lost, his appetite seemingly unquenchable, but I tell you what, it’s fantastic entertainment.

He’s so good, he might even be able to make that God awful TV show entertaining too.

A bit of a short one today, but I have a long drive ahead of me, so I’ll leave it there. I’ll be back tomorrow, hopefully with more than a stray tumbleweed to report.

Have yourselves a good Saturday.