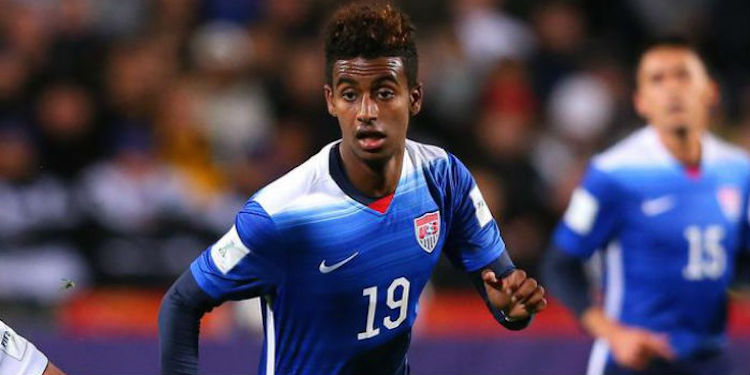 Happy Friday! It’s the last day of the week, and probably the last day in the office for most of you with a weekend to look forward to. Me? I’m on holidays now until Wednesday, so yah boo sucks to you. I’m going to spend my Friday doing…well, I don’t quite know yet, but it sure as hell won’t be working.

We’ll start today with youngster, Gedion Zelalem, whose surname sounds a bit like a sleeping pill, and his ambitions for the coming season:

I’m going to go back for pre-season and try to get into the first team and play some games.

If I can do that, great. If not, I’ll look to get out on loan somewhere. It’s a dream come true to be at a club like Arsenal and I want to get into the first team this season, play minutes and start matches.

I have high expectations of myself and if I was to be starting week in, week out, I wouldn’t be surprised.

Lofty ambitions, and while he’s very highly thought of, I have to say I for one certainly would be surprised if he ends up starting for the first team week in, week out. He’s just back from the under-20s world cup, playing for the USA in the New Zealand hosted tournament, but with even seasoned and experienced players like Jack Wilshere struggling to hold down a place in Arsenal’s midfield, it’s going to take something very special from Zelelam to make the breakthrough this season. Much more likely that he’ll end up with a run in the youth team, or maybe even a season’s loan. Either way, his excitement is good to hear.

Next up, news of an actual transfer! Except it’s one on the way out, with Ryo Miyaichi signing a permanent deal with St Pauli, who play in the German second division. Miyaichi signed for Arsenal four years ago, but never made the breakthrough, with loans to Bolton and Wigan not really working out due to injury. He’s still only 22, meaning there’s plenty of time for him to turn into the player Arsene presumably thought he could be, so good luck to him in Germany.

Also on his way out of the club is Semi Ajayi, sealing a permanent move to Cardiff City. Although he’s apparently been a regular for the under 21s, I have to confess I know absolutely nothing about him at all, but wish him the best of luck with the Bluebirds.

News of another possible exit, this time from the management team, with goalkeeping coach Tony Roberts seemingly set to leave for Swansea where he’ll again link up with Lukasz Fabianski. As reported on Arseblog News, Roberts’ departure might indicate substance to the much mooted move for Petr Cech, and a desire to bring Chelsea goalkeeping coach Christopher Lollichon to the club with him.

In more goalkeeping news, it seems that after just one season, David Ospina might be the one to be sacrificed on the alter of Petr Cech, with reports surfacing in Turkey that Fenerbache are interested in taking him off our hands. It’d be an odd one to let go the keeper who ended last term as our first choice in goal after just one season. I’m not sure he’s always felt entirely convincing, but his stats are impressive, and having established himself in the team, it’d seem strange for him to be the one to leave. But, if the Cech rumours are to be believed, one of them is going to end up having to go. We’ll just have to continue waiting to see what happens with that.

Matthieu Flamini has been talking to the official site, remembering how Thierry Henry and Dennis Bergkamp taught him how important hard work was when he arrived for his first stint at the club:

With Bergkamp and Henry there, there was a lot of class and so much quality. It was impressive to play next to them and pleasurable. Just looking at them playing was a great lesson in football.

And that’s the rub. For all their quality and natural talent, top players like Thierry and Dennis worked very hard for their success, and that dedication makes players around them raise their game, making the whole team better.

And speaking of natural talent, Mesut Ozil has told the official site that a lot of what he does is off the cuff:

I make a lot of decisions instinctively. You can practice passes and other aspects of your game a lot, but I decide a lot through instinct.

I see things that some other players may not, and that’s why it’s important for me to have that instinct. It takes me forward on the pitch because nowadays you have to take decisions quickly and if you didn’t have instinct, it would be much tougher.

Sometimes the things Ozil tries don’t quite come off, or the players around him aren’t quite on the same wavelength or don’t see the picture quite as he does, but the more they play together the more that’ll come, and with talented players around him like Ramsey and Alexis, the prospect of their continued integration is mouthwatering.

That’s your lot for today. I’m off to think about the things I might do today. Keep up to date with the day’s events over on Arseblog News, and I’ll be back with more tomorrow.