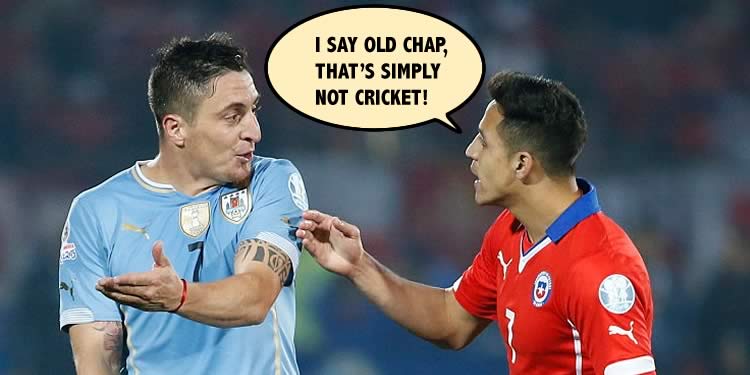 There are a couple of reasons I haven’t been watching the Copa America this summer. Firstly, the time it’s on at means I’m usually all tucked up in bed. Secondly, while I love football, the summer does provide some time away from the game – especially when we’re bombarded with it during the regular season to the point of saturation.

It’s nice to have a break and to be a bit enthused about it when things kick off again. Plus, despite the presence of a couple of Arsenal players – most notably Alexis Sanchez – I have no vested interest in any of the teams so it’s easy enough to let it pass me by.

However, the presence of one of our most important players, continuing what has been a long and exhausting season for him, will have an effect on us. The further Chile go, the more his mandatory holidays and rest eat into the start of the next campaign. The lessons of Ozil and Mertesacker post World Cup 2014 have to be learned and despite his relentless enthusiasm and desire to play, he has to be given time off to recharge his batteries.

Chile are now in the semi-finals, having gone through against Uruguay, so his tournament will continue until at least July 3rd. The final is July 4th, but there’s the ridiculous third/fourth place play-off game the day before – and why we even bother with those games now is beyond me. You don’t have a pointless game to figure out who comes third in the Champions League, for example, so why do we need one for international tournaments. It’s not as if the players or fans give a single shit.

“Son, have I ever showed you my third place medal from the World Cup?”

The other worry is that he might pick up an injury, and that was what crossed my mind this morning when I saw a headline on NewsNow saying: Uruguay Player Has Apologised to Me: Alexis Sanchez.

I had a little heart in mouth moment, I’ll admit. Was it a Shawcrossian apology? Did the Uruguay player’s mummy come pick him up and drive him home as he cried his little eyes out because his tackle snapped Alexis’ leg into little bits? Fortunately, it wasn’t anything bad, but from NDTV Alexis picks up the story:

“They like to fight, argue, go forward all out; one player told me in the first half ‘Move you wimp’ — but then later he said to me: ‘I am sorry’,” Sanchez said, without identifying the opponent in question.

“He said to me, ‘That’ll do, I kicked the shit out of you’. And I said, ‘Alright but you could have caused an injury and that’s not what football is about”.

I suspect that the response from Alexis might not have been so polite in the heat of the moment, in fairness. Hopefully Uruguay are the kickiest team Chile will face and he won’t be exposed to any more attempts to kick the shit out of him, but after such a successful debut season in England you can’t help but think that’ll be a fairly regular tactic in the Premier League next time around. For now though, he’s good.

Elsewhere, Lukas Podolski has been linked strongly with a move to Galatasaray – for about the 145th time. There were even some quotes supposedly from the player himself about how he wanted to leave in the Turkish press. However, ‘Turkish press’ doesn’t lend itself to legitimacy when Metro, for example, could be used as an example of the ‘English press’, and the quotes from Podolski that came from Bild seem much more reliable.

He called the move to Inter Milan a ‘mistake’, and suggested he’s ready to play with us next season:

I’ve always felt comfortable there. With the fans, with the team and also with the manager. I’m going back to play, I have to say my qualities suit Arsenal.

When he was sent out on loan in January, there were many critical of the move because they felt it blunted us from an attacking point of view. The fact that we scored 55 times between his departure and the end of the season pretty much nails that one as false, and the way the team developed over that period makes it more difficult than ever to see how he fits in.

Even in the first part of last season, when we had injuries to key players like Mesut Ozil and Olivier Giroud, Podolski rarely got off the bench – a sign that the manager’s faith in him had diminished considerably. His goal against Anderlecht grabbed us a late win and he scored twice against a Galatasaray side against which Arsene Wenger also felt comfortable using someone as young as Ainsley Maitland-Niles as a substitute, so they weren’t the kind of strikes to push him into the manager’s thinking.

If we are looking to improve our attacking options this summer, space in the squad is going to be important. We were top heavy last year, we loaned Podolski, Sanogo and Joel Campbell, and found some balance. I don’t really see any way of him playing a significant role in the team next season. If he’s happy being on the periphery – and his comments before his loan suggest that’s not the case – he might be squad fodder, but if I had to money on it I’d stick a fiver on us finding him a permanent home elsewhere before the end of the transfer window.

And while we’re on Sanogo, he’s on the agenda for Lille who want him to join on a season long loan deal according to reports in France. You can’t see how that would be a bad idea for all concerned, can you?

Finally, the first signing of the summer sees the wonderfully named Vlad Dragomir join from Romanian side ACS Poli Timisoara. Before you get too excited, he’s a 16 year old midfielder so won’t be playing first team football any time soon, but interesting things are happening at that level. There have been concerns about the standard of player being produced by the academies, and also the results which indicate things need to improve.

With other potential deals done, or being done, it looks as if the solution is coming in two parts. Obviously Andries Jonker and his staff have to start developing home-grown youngsters to a better standard, but in the short-term the capture of exciting young talent from abroad looks to be the policy.

Right, that’s your lot, more from me tomorrow.