Jack Wilshere said it after Arsenal’s 1-0 defeat to Swansea: The Gunners find it tough against teams who like to play with the ball at their feet too. “It’s almost like you play, we play,” he told Arsenal Player.

That was the case again in the 1-1 draw against Manchester United, who dominated much of the encounter but had to settle for a share of the spoils. Yet, in that game, it also showed that the idea that there is a single, homogenised style of build-up play in football is not true: possession football is diverse, and just as long-ball vs tiki-taka can result a certain, cat-and-mouse kind of match-up, so can possession v possession. It’s just that in this case, United were far better at it and it was only until midway through the second-half, and Arsenal upped their intensity, that the game evened out.

Manchester United broadly follow the Dutch principles of 4-3-3, though Louis van Gaal has added his own slant to it, which has been described as one coach, like “militarised Total Football.” Players generally stick to their own positions and the ball is passed around side-to-side quickly in the hope that space opens up for a cross or a pass that’s slipped behind. Arsenal on the other hand are more player orientated, with Arsene Wenger granted autonomy to the attackers to move inside to create moments of overloads through zippy, one-touch passing.

For much of the game though, Manchester United were the better side, dragging Arsenal players out of position through the way they like to make the pitch big. As Johan Cruyff always says, you help the man in possession, not by coming towards him, but walking away from him, as this creates angles to make passes. Manchester United kept on creating moments of numerical advantage because to the side of each Arsenal player, there was a man, and it was hard to close them down. This problem was illustrated best when Arsenal tried to press up the pitch.

When United had the ball at the back, the centre-backs moved wide so when Mesut Ozil and Olivier Giroud went to try and press them both, they simply popped it down the centre for Danny Blind to pick up unmarked as Coquelin, Cazorla wouldn’t follow him that far up the pitch. They were occupied by Fellaini, Herrera respectively, who went the opposite way, towards Arsenal’s goal, so the space opens up if the midfielders tried to follow. 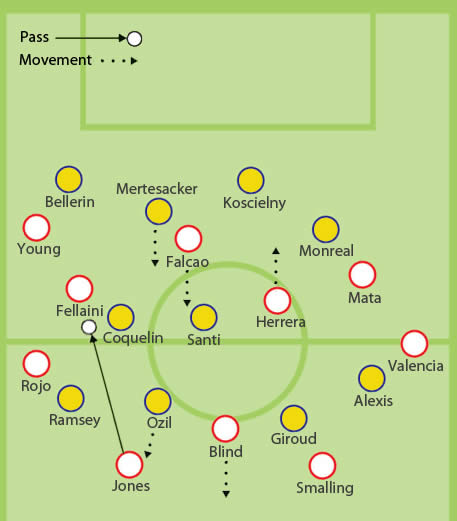 If Ozil decided to drop off, then Smalling or Jones would then pass it to the full-backs, who were even wider, and that meant Ramsey and Alexis would have to go towards the ball. This is where Arsenal’s problems were really exacerbated because the two wide players would often lose their discipline and start hounding the ball when they would have been best served holding their position, and allowing the rest of the team to regroup. Instead, the ball was played too played behind and The Gunners were forced to back off. At various points in the match, Ozil was seen to grow visibly frustrated at this, imploring his defence to move up the pitch to squeeze the space. Wenger said they improved in this regard in the second-half, though part of it may be down to United grow more tiring of their plans as much as The Gunners wising up.

Arsenal, in contrast, when they had the ball at back, still leave a lot to be desired. How is it possible to keep sustained pressure when more than half of the goalkeeper’s passes are long? And with Coquelin not offering himself on the ball, how can Arsenal effectively circulate the ball? Early on, Santi Cazorla dropped deep for the ball but The Gunners soon abandoned that for more rudimentary long-ball tactics. Certainly, Wenger’s tactics are to play in the opponents half as much as possible rather than his own, thus he pushes his midfielders up the pitch in the build-up, and then tries to hit Giroud early if the pass through is not on. But without opening the pitch up, it can put the team under pressure.

One of Wenger’s most famous quotes is that he likes to “not to be in trouble, but to fool the opponent into trouble.” He probably deserves credit for being a bit daring, trying to do something different rather than stumbling into the same troubles many teams do when trying to open the pitch up. At their best, the Arsenal players seem to feed off each other, and with a quick gesture or pass, know where to run. In this match, though, against United’s meticulousness, perhaps Arsenal needed a more robust plan. Indeed, at the moment, there seems a big reliance on players who can beat a man 1 v 1 and that showed when Walcott and Wilshere came on to help change the game.

Before that, there was space to be exploited behind United’s backline, had Giroud been more lithe. That has been the frustration of Giroud recently because for a while he looked like he might develop into the high-class striker that Arsenal need. Indeed, much of Arsenal’s good form since mid-February has been down to his increased determination following injury but in the last four games, he’s not been able to get onto end of those chances.

He’s still doing the things that he did before very well; running the channels and trying to get in behind the defence, while his touch has remained superb. But the big moments still elude him somewhat, when he needs to take the ball away from a defender at speed. That showed in the one big chance he had in the game (and the other, slightly good opportunity when he hit the side netting). Giroud did brilliantly to fend off Rojo, his upper body such a handful for defenders, but he lost his balance at the crucial moment and hit a tame shot at De Gea with his weaker foot. There were other nearly moments too, where he should have gotten the better of Phil Jones, but lacked the yard of pace to get away.

It was a similar kind of story for Falcao at the other end though he played an inadvertent key role in the build up to United’s first goal. The passage of play also showed where United were superior on the day as Arsenal committed a number of small errors as they tried to prevent the goal. First, there was impetuousness as Coquelin dived in to try and stop the pass, too eager to close down his man, Fellaini.

At the same time, Mertesacker followed Falcao all the way to the middle of the pitch, anticipating a pass to the striker. That created a large space at centre-back which Santi Cazorla, who Mertesacker should have passed Falcao onto, tried to cover. However, as the ball was passed on to Young, the game’s most impressive player (though Koscielony deserves a big mention), Cazorla was too slow to get back and double up, idly watching the game go by.

By this point, Falcao, Herrera and Fellaini had all run to the back-post, creating an overload which The Gunners couldn’t deal with. Herrera finished and though Gunners mounted a late fight-back to equalise, the battle of styles was won by Manchester United.