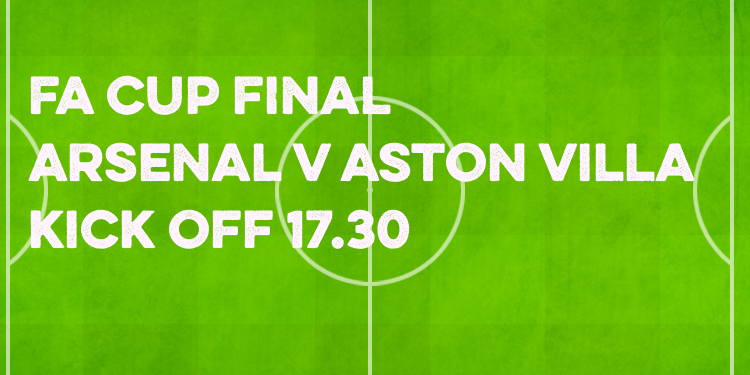 Well here we are again. FA Cup final day and while it’s not as warm as it was last year, it’s still London, we’re going to Wembley, and that feels good. It’s t-shirt (but with a jacket) and sunglasses day; a cold beer in an outside garden with friends day; an excited, nervous, swaying between confidence and dread day; but most of all a what it’s all about day. Arsenal are in the FA Cup final and it’s fantastic.

I’m definintely of the opinion that the stature of the cup has changed down the years. It used to be the showpiece, now the FA have dicked around with it so much that any complaints about how it’s perceived are on them, but ask any Arsenal or Villa fan and there’s nothing more important this morning.

Last year there was a huge pressure on us to end the trophy drought, it had been 9 years without one, and I think that was reflected in the performance and the way the day went in general. And while we’d all like to think that last season has lifted the weight from us, the way we struggled against Reading in the semi-final is a reminder that you can take nothing for granted.

Today there’s still expectation, it’s different from last year, but after a league season that disappointed this is our chance for success. It won’t be easy, anyone who thinks what happened between these two teams in the league this season has a bearing on today is looking at wrong, and we’re looking to do what we did in 2003 by retaining the trophy.

Obviously there are talking points. My preference would be Szczesny but the only reason I think he’ll play Ospina is because he didn’t give the Pole a run out in the last game of the season. Still, then when it comes to what you think the manager will do and what he actually does there’s often a difference, so it also wouldn’t surprise me if the former first choice started.

Up front, Giroud’s eight game streak without a goal is the longest of his Arsenal career. I reckon the manager will stick with him rather than Walcott for what he brings defensively as well as the way he has an impact on the way the team plays in general. Nevertheless, Wilshere and Walcott have pushed for a place with their most recent performances and, if they miss out, provide genuine options from the bench.

Hopefully the recent form (and by that I mean the final months of the season rather than the few games) will give us the momentum we need going into this one. I can’t stress enough how different a final is though. We’ve had the highs and lows of the FA Cup in my lifetime. The fact the opposition is considered weaker or of lesser quality really has no bearing on what might happen.

However, we’ve got so much quality in this side – especially from an attacking point of view – that if we manage to click we can definitely cause them problems. When we’ve struggled lately it’s been against teams who have sat off and looked to defend, I can’t see Tim Sherwood sending his team out to do that today. That should be to our advantage but you also have to take into account the occasion.

The experience of last season, when we won the cup in the most modern-Arsenal way possible, should stand us in good stead. Going 2-0 down and coming back means that if things don’t go quite the way we expect we know we can cope and get ourselves back into it.

I’m sitting here this morning with my stomach slightly churning (although that may be something to do with beer and the significant amount of Knob I had in my mouth last night), and I can’t wait. It’s a day out in the sunshine with friends and the Arsenal, with the chance of silverware at the end. What more can you ask for?

We have the chance to make this season one which is remembered for the right reasons. Ultimately what you look for is a trophy, and today provides us with that opportunity. The players know what it means, the ones who weren’t here last year were brought up to speed, so let’s go out there and do this today.

Now, what did she wear?

If for some reason you can see the game later on – and I’ve heard horror stories of people having to go to weddings or other hugely inconvenient and selfish family events – we’ll have full live blog coverage for you. Check back later for a post with all the details, or simply bookmark the default live blog page and updates will begin automatically.

Now, preparations begin. Wagons roll. See you some of there, more of you afterwards, and I will be channeling the spirit of Brady with his socks around his ankles pushing the ball out to Rix who crosses for SUNDERLAAAAAAAAAAAND …