I once ventured on a safari in Swaziland. Do you know of Swaziland? The land of the Swazis? From where the Swazis come? Surely you are familiar with its old National Anthem?

O Swaziland, O Swaziland
We are a piece of Enger-land
In fact a British Protectorate
Our government a home counties directorate
We thank you British overlords

O Swaziland, O Swaziland
The Queen will take our contraband
She’ll thank us nicely
Then screw us twicely
We thank you British overlords

Those were the days! They’ve changed it now, I think. More’s the pity. Anyway.

It was a typical safari of the early 20th century. It was a morally less edified time and we bagged myriad species of beautiful and now rare species. Spectacular ‘megafauna’, vast animals such as the rhinoceros (The Frank Cockleton of African wildlife), the giraffe (The Fellaini of the plains), the hippo (nature’s very own Wayne Rooney) and the elephant (or the ‘Lampardephant’). We shots antelope by the dozen. Cape hyrax. Primates by the score. The common mole rat provided a diversion (Arjen Robben-like) if things were slow. If it moved, we opened fire on it with a variety of small arms.

Three weeks of the slaughter of innocent beasts huge and small followed by silver service feasting in the evening. Truly wonderful times. Three weeks of it! It was all exceptionally jolly, But there was one animal we never quite managed to murder, despite thirty of the finest shots to be found anywhere in a British Protectorate anywhere in the world, some really excellent local guides and weaponry which included handguns, a score of Winchester Seventy Six hunting rifles, a few .500/450 Nitro Express elephant guns, hand grenades, mustard gas and two dozen land mines. Yes, that’s right. The bloody lion. Not a single one. Not even a slightly lame elderly female. Rats by the thousand, shrews, hares, bats by the bucketload, cheetahs, wildcats, hyenas. Yes, all very well and their lovely little heads do brighten up one’s house, but not a single ruddy lion.

The frustration was not matched until the last three matches of this season. Yet it was not a lion that Woolwich sought – although to have seen one tear Sunderland’s flat back ten limb-from-limb on Wednesday evening.

It was the most elusive wild beast: The goal.

Woolwich have the finest array of attacking players we have been able to muster in at least seven years and yet not a single goal at home in three matches. Sadly, such recourse that we took in Swaziland when no lions where forthcoming, the summary execution of all local guides and support staff, is not available to the Arsenal fan.

So from whence does this insurmountable problem come? Inadequate motivation? A lack of gentleman’s favours from midfield? A sudden upturn in the defensive skills of Messrs. Pantilimon (whom we seemed to turn into Pat Jennings for the evening), Jones, Coates, O’Shea & van Aanholt? One foot in the gin bar for the summer? Too many set squares*? Tickety-Tackety** not quite brisk enough? Whatever it is, we hope the traditional summer of debauchery can sort it out.

Some small notices: To Dutchland, where we learn that good old Geoffrey Vaughan, (Woolwich Arsenal 2001-2004) has been appointed manager of Feyenoord. Well done Geoffrey. You shall always be remembered for playing quite well back in 2001/2, when we took the title.

And then to Manchester, where, barring an eight goal win over Hull, it looks like Newton Heath will finish below the Arsenal yet again, despite spending on such fripperies as That Winger Who Looks Like He Was Hit Around the Face with a Spade for £66m, and that fat shit Luke Shaw for £33m. That is one million more than Whizzbang Saunders cost us. I have prepared a little image to express how that vile codpiece Herr van Persie must be feeling. 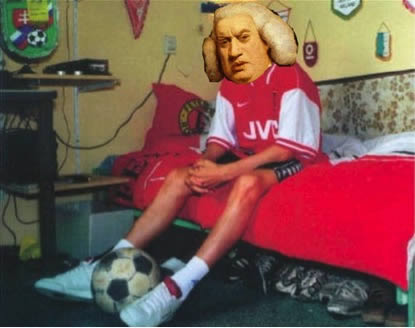 Ta ta for now, old eggs. Until next week!

* Sideways passes
**Arsenal’s preferred style of football, since ripped off and Spanified by Barcelona.