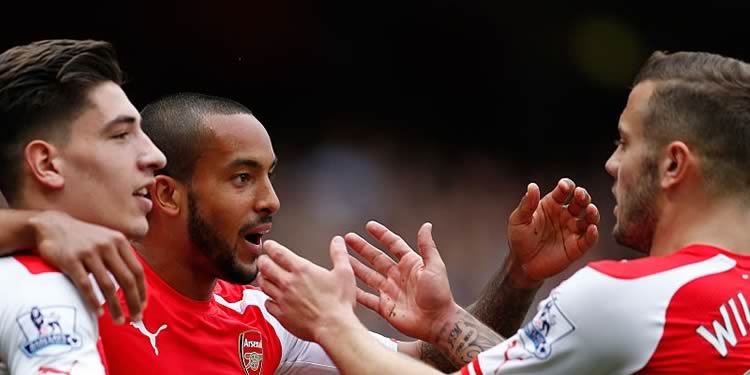 The final league game of the season brought us a comprehensive win, two amazingly good goals, an end to our goalscoring drought, and some individual performances that will really give Arsene Wenger something to consider this week ahead of the FA Cup final.

The selection of Theo Walcott wasn’t a surprise but his deployment as the main striker was a little. I’d expected him to play from the right but as Olivier Giroud is without a goal since April 4th the manager felt a change was necessary. Inside a minute Walcott had a shot blocked and before the game was 5 minutes old he put us ahead.

Using the pace from a Cazorla pass well, he let the ball run across him and from a reasonably tight angle he arrowed a blistering shot into the top corner via the underside of the crossbar (something I always like – it adds a bit of crash to the bang and the wallop). It was in stark contrast to our rather insipid finishing against Sunderland on Wednesday night and just what we needed in the context of the game and our recent problems in front of goal.

There was a zip and an energy to our play with Jack Wilshere showing the manager his fresh legs can add something to a team that had looked tired recently. It was his fine run and combination with Mesut Ozil that saw the ball break for Walcott to poke home his second goal 10 minutes after the first. Maybe you can say he was lucky that it fell for him but he had to be sharp to make the space for the finish.

Two minutes later Wilshere made it 3-o. When the ball was half cleared from a corner, Gabriel kept it alive by touching to Jack on the edge of the box. I think what made this goal so good wasn’t simply the power, accuracy or venom of the finish which blasted into the top corner, but the nonchalant swipe of that left foot to send it on its way. It was the most sumptuously perfect half-volley, and the goal was real reward for the quality of his performance overall.

So, it was no surprise that a move started by Wilshere with a typically positive run and combination play around the box, ended up with Walcott tapping in Cazorla’s shot at the far post for his hat-trick. The two Ws had a sensational 45 minutes between them – indeed had Boaz Myhill not been in outstanding form Walcott might have had more in that first period.

The second half, for obvious reasons, lacked the same intensity. West Brom made changes to ensure they didn’t capitulate in the same way, while with a cup final on the horizon there was no need for us to run ourselves into the ground.

They pulled one back after David Ospina came for a corner and got nowhere near it, allowing Gareth McAuley the simple task of heading the ball into an empty net. That the corner came from a rather odd looking save by the Colombian is another matter.

Late on there was a shot he let slip through his fingers which clipped the bar and went out for a corner. If, at the other end, Walcott’s performance has thrust him right into the manager’s thoughts for a cup final start, Ospina’s will only have done Wojciech Szczesny’s chances of doing likewise some good.

We made some changes with Ramsey and Giroud replacing Walcott and Coquelin, and the Welshman could have had a couple himself. Ozil set him up for a shot which smacked back off the post and provoked this fantastic reaction from Arsene Wenger, he forced Myhill into an excellent save when the keeper tipped the ball onto the crossbar, before he put one wide from a good position.

Having seen what Jack Wilshere did, Ramsey clearly wanted to remind the manager of his own quality, but in the end no further goals were forthcoming. We got a 15 minute cameo from Alex Oxlade-Chamberlain, playing for the first time since March 9th, and that’s a nice little boost ahead of Wembley, but in the end a well deserved victory and the goals provided just the fillip we needed before the final.

He was already sharp when he came on in our midweek game against Sunderland. He was the one who created the chances and I always said that he could play through the middle because he has good movement, good finishing and he did that well today.

He has been out for six months and now he is coming back. He had a very convincing performance in the first half.

And the performance overall:

Today, every chance we created we scored in a convincing way. The first half was of top quality. The second half was less convincing, but we still had chances. Overall we did the job well today and we finished the season on a high.

There’s no doubt this was just what we the doctor ordered after our fluency and rhythm had been shaken by the end of the unbeaten run. I’ve said before it often takes us a few games to find that again and I think we did that pretty well.

The changes made to the team, and the desire of certain players to show what they can do to push for a start at Wembley, made a big impact, but I think we also have to take into account the performance of West Brom who, clearly, didn’t give a shit – especially in the first half. That’s not to take away from what we did, but it was fairly obvious this was an end of season game they just wanted to be over and done with as little effort as possible.

Nevertheless, you can’t ignore the claims of Walcott and Wilshere, and it leaves AW with some thinking to do this week. Do you hope that your tired looking striker who hasn’t scored in 6 or 7 weeks finally finds his shooting boots again, or do you go with a player who looked lively, sharp and dangerous in last game? A player you haven’t really trusted all season over one you have? A player who enjoyed the benefit of playing against a team that was switched off over one who found himself given special attention by teams who were desperately looking for points?

In midfield something has to give if you want to play Wilshere, there just isn’t room for all of them. And it’s very difficult to read anything into the decision to play Ospina yesterday, but now, if you play Szczesny, you’re asking a goalkeeper has played just 5 times in 2015 to come in to a cup final without the benefit of a run-out beforehand. Even Fabianski got that last season.

Anyway, plenty for him to ponder and for us to discuss during the coming week. Third place was secured, there’s no Champions League qualifier to contend with in August, and now we can concentrate on getting ready for Villa on Saturday.

James and I will be recording the Arsecast Extra for you this morning. If you have questions or topics for discussion, send them to @gunnerblog and @arseblog on Twitter with the hashtag #arsecastextra and we’ll have that for you later on.