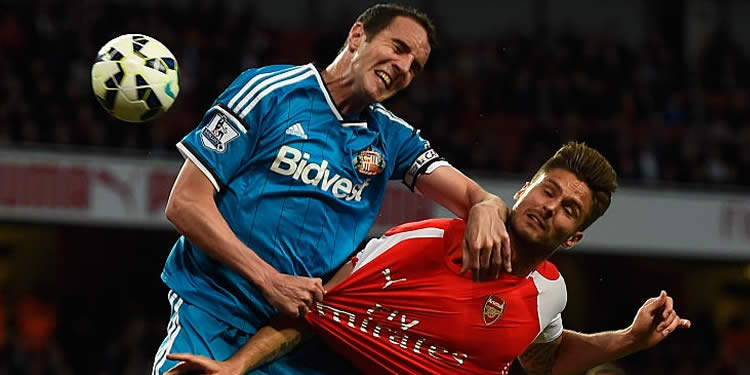 It’s almost always been a feature of Arsene Wenger’s sides that when a good run and some serious momentum is halted by defeat, the team takes a little while to find its rhythm again.

Despite dominating the game in terms of possession (76%-24%), passes (715 t0 176), and shots (28 to 7), it always felt like we were missing something. Sunderland were stubborn and determined (completing 43 tackles, 9 more than Swansea the previous Monday) we lacked the imagination or guile to find a way through a packed defence.

It wasn’t for lack of trying or lack of effort, it was simply that the quality of the final ball was missing, and when we did have a sight of goal the finishing wasn’t up to scratch. The best effort of the game from an Arsenal point of view fell in the first half when a Jack Wilshere pass found Mesut Ozil but with his right foot he blasted over the bar when he should at least have hit the target.

One of the main complaints when we play like this (or have a performance like this forced upon us by a team set up not to concede) is that we don’t try any shots from outside the box. Via the Stats Zone app I count 10 attempts from distance:

3 hit the target, 3 went wide/over, and 4 were blocked which, I suppose, is an illustration of how doggedly Sunderland played knowing that a point would secure their Premier League survival.

I was going to suggest that our game lacked width but we made 35 crosses from wide areas, only 4 of which found an Arsenal man. That said, I think when you pick a player like Jack Wilshere on the right hand side, he shares that natural tendency to drift central like Aaron Ramsey often does, and there were times it all got very congested. At one point, midway through the second half, there was acres of space on the right hand side, but nobody in it.

The introduction of Theo Walcott helped somewhat. He stayed wide at times and when he did get into the box he was unlucky not to score after making space for himself, his shot well saved by Pantilimon. Generally speaking though, it was fairly predictable stuff. While you have to give credit to Dick Advocaat for turning what was a pretty shambolic Sunderland defence into a well-organised unit, it was bread and butter stuff for them really.

We pressed them back, passed it one way, came back, passed it the other way via our central hub Santi Cazorla, passed the first way again, came back, passed out the other side, possibly stuck a cross in, but there was a lack of movement and sharpness to our play that made it look as if we were never going to score. I think we could be still out there now, the two teams on their knees like competitors in a dance marathon, and we wouldn’t have found a way through.

Giroud had a decent flicked attempt well saved, as did Gibbs with a header. At the other end it’s probably fair to say that Sunderland had the best chances. There were a couple of one on ones which Ospina did very well with a couple of occasions when the Colombian had to react quickly to snuff out danger. And in the 68th minute Fletcher contrived to miss from so close to the goal that it was almost an audition to become an Arsenal forward.

That the closest we came to scoring was a rebound off a Sunderland defender that cracked back off the bar tells the story really. It just wasn’t going to be our night. Despite all the shots only 8 were on target. We’re a team that looks a bit flat right now, the zip is gone from the passing and the finishing has really let us down in the last couple of games.

It would have been a perfect time to bring on somebody like Danny Welbeck, but his injury means he’s missing out on a chance to take over from Giroud when the Frenchman’s season has hit a difficult patch.

We lacked a bit of sharpness in our movement, in the way we prepared our chances and in our finishing as well. Physically it was an intense game on Sunday from what we have analysed and we were a bit jaded tonight. We haven’t scored in the last three games at home and the fact that we couldn’t score played a big part in our spontaneous attitude when finishing.

I suppose when you have just one Premier League game left before the FA Cup final it is something of a worry that we’ve found our goalscoring form deserting us. Ideally a win last night would have allowed the manager to rotate/rest ahead of Wembley, but although goal difference is in our favour, third place is not 100% guaranteed just yet.

I think he has to change things around a bit for the game against West Brom but much of that will depend on who’s fit. We’ll be waiting on tests on Welbeck and Oxlade-Chamberlain, two players who could have added something a little different to what we saw last night, while Walcott’s run out might just convince Wenger that playing a central-midfielder on the right hand side – as well intentioned as it is – provides positives and negatives, and last night the negatives were a little too obvious.

If there is a silver lining to the cloud, it’s that at least it wasn’t one of those games where we struggled to threaten at all. I remember a spell last season or perhaps the season before, when we were so toothless we barely had a shot at goal for a number of games. The chances we made last night weren’t really clear cut but we made them all the same. Mesut Ozil created 7 from open play, so it’s easy to see that if we improve our finishing then we can start to be dangerous again.

However, the fact there is just a single fixture remaining before May 30th means we’d be well advised to pick things up against West Brom. I think Tony Pulis will have watched the Swansea/Sunderland game closely and will look to frustrate us in much the same way, so let’s see if we can figure out how to break them down.

Right, that’s that. Tim Stillman’s column will be here later, I’ll be back tomorrow with an Arsecast. Until then.