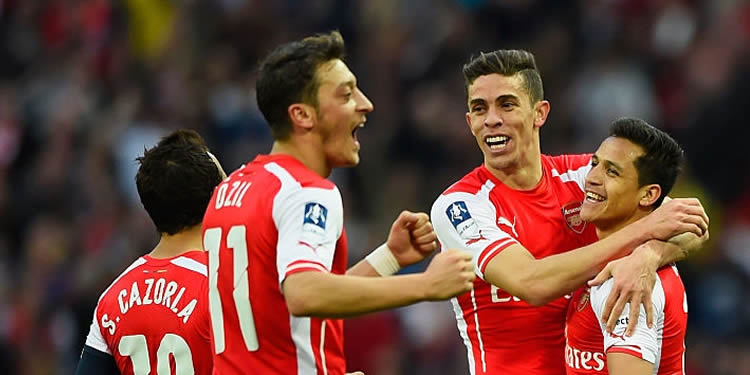 Arsenal Arsenaled their way to the FA Cup final yesterday with an Arsenalriffic win over a Reading team that made it very difficult for us.

As I suspected the manager made a number of changes to his team beyond the goalkeeper with Mathieu Debuchy, Kieran Gibbs and Danny Welbeck making the starting line-up. And, with the benefit of hindsight, it’s fair to say that none of those changes really did us any good.

Debuchy worked hard but looked like a man who had been out for most of the season with injury. It’s to his credit he lasted the 120 minutes. Kieran Gibbs did nothing to suggest that he’s going to win his place back from Nacho Monreal any time soon, and Welbeck did all right but when Olivier Giroud came on and started doing his stuff you could see the difference he made.

It wasn’t exactly high quality fare from either side really. Per Mertesacker almost put us ahead early on from a Mesut Ozil corner (and the quality of his set-piece delivery all day was notable). Ozil himself curled a free kick just wide, and we had Wojciech Szczesny to thank for keeping the scores level with a very good save after which Reading looked like scoring but it was ruled out for offside.

In the 40th minute the deadlock was broken when a quite delicious pass from Ozil found the run of Alexis Sanchez, and he was coolness personified in the box to step inside a defender then put the ball between the keeper’s legs. It was a shining moment in an otherwise scrappy game. The pass, the run, the finish, all of the highest order and we took that lead into the break.

The idea that it might inspire us to perform better in the second half was a nice one, but fanciful. Reading worked extremely hard, making it tough for us to find any kind of rhythm or fluency in our game, and as poorly as we played they deserve credit for that (although that Williams chap in midfield seemed to have carte blanche to do whatever he liked without caution).

If their equaliser wasn’t necessarily deserved, it certainly wasn’t a surprise when it happened. We defended poorly, a cross went over a startled Gibbs at the back post and the shot deflected off the left-back enough to take it past Szczesny who grabbed it behind the line. He should have done better with it, but the touch off Gibbs certainly played a part.

We lost Mertesacker to injury after a fairly nasty studs-up challenge, and brought on Giroud for Welbeck. The game opened up a bit and it could have gone either way in fairness. Gabriel forced a great save from Federici with a header from an Ozil corner, and from an Ozil free kick headed over the bar when he should have scored. Perhaps some evidence the Brazilian might be a real threat from set-pieces but some practice on the training ground wouldn’t go amiss. At the other end Szczesny made a save at his near post as they looked for a winner.

Aaron Ramsey hit the post late on, while Reading spurned a fantastic two on one situation which could have proved very dangerous indeed. Extra-time beckoned and Reading sat deeper and deeper, allowing us plenty of the ball but little in the way of clear cut chances. Just before the break, we worked it down the left, Alexis cut back inside and fired a shot which the keeper allowed to squirm through his grasp, through his legs and just over the line.

It is a pretty horrible thing to experience … if you’re the Reading goalkeeper or a Reading fan. I am, of course, neither of those things, so it was great. Not that I’m interested in reveling his misery, I’m just delighted every time the ball goes in and how it goes in is pretty much irrelevant to me. He’d had a bit of luck a few moments earlier when a Ramsey shot hit him and rolled just over the bar, and on this occasion the luck ran out. So it goes.

In the second period there was plenty of pressure from Reading which we dealt with pretty well, Giroud hit the outside of the post, but in the end we saw it out to reach the final for the second consecutive season. Afterwards, the manager said:

It was a difficult game against a very resilient, well-organised, physically very strong side. In the end we were a bit lucky because their goalkeeper made the mistake and I can understand that. He kept them in the game as well for long periods.

I suppose there is an element of good fortune to it when a keeper makes a mistake like that, and I’m glad we avoided another penalty shoot-out. Sometimes those things go for you though, and we know well enough from previous Wembley experiences that it can work the other way too. That’s football.

In terms of our overall performance, I think we struggled to find the cohesion of the last few weeks for a number of reasons. Firstly, I don’t think the changes to the team worked. Neither full back contributed a great deal to the play in general, and when you look at how Monreal and Bellerin have been playing recently that was certainly an area that weakened us.

Secondly, Reading played very well and tried to make it as hard as possible for us to play through them. Defensively they were very well organised and switched on. And thirdly, the occasion played a part. It was a semi-final and in my memory of watching this club, I can’t ever remember an easy game at this stage of the competition, regardless of the opposition. Remember the 1-0 over Wolves in 1998 when a goal from Chris Wreh – in terms of luck right up there with Federici’s mistake yesterday – was what saw us through to the final?

So, not our finest performance of the season but the record books won’t show how we played, just that we got there. Similarly, despite the fact he, like others, had a hard time, two goals from Alexis will go down as a big player producing in a big game. The Chilean has had an outstanding first season thus far and hopefully there’s more to come from him.

Obviously the manager will assess the way we played and the performances of those who came in. Our next game is against Champions elect Chelsea after they beat Man Utd 1-0 yesterday, and while we can’t spoil their party we can at least delay it for a while.

For now, we put this game on the back burner, take what we need to from it, but also enjoy the fact that we’ve got another visit to Wembley at the end of May to look forward to. And that is all that matters this morning.