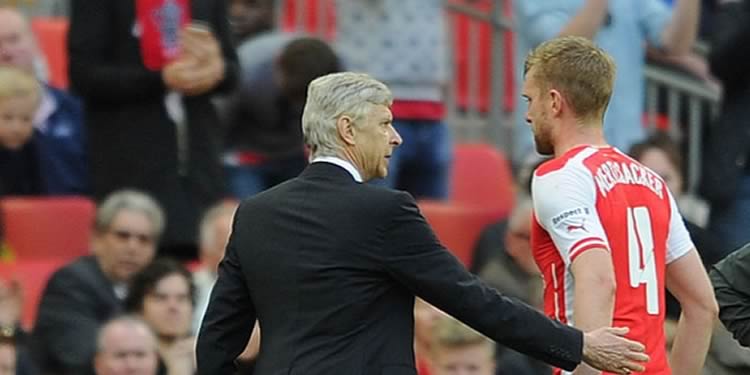 Morning all, the dust settles on an FA Cup weekend and it turns out it’s going to be Aston Villa in the final. Brendan Rodgers’s glowing shark teeth weren’t scaring Tim Sherwood’s men yesterday, and a goal from Fabian Delph helped Villa do Liverpool’s dishes.

On a very basic level I’d be happier playing Villa than the Scousers in the final. Not that I’m taking the slightest thing for granted, but we’ve already beaten them twice this season, plus we get to avoid the whole Gerrard’s last game on his birthday thing. I had a quick text conversation with the Mugsmasher about yesterday’s result and he reckoned he looked lost. Perhaps he was suffering with a case of the Stevie Jeebies.

I’m not even sorry.

To be fair, Villa have improved considerably under Tim Sherwood so the Villa we spanked 5-0 won’t be the same Villa we meet at Wembley on May 30th. That Villa was a broken, disheveled team in the image of a manager who had run out of ideas and looked like he would prefer to spend his days in a dark room sitting on a sofa eating box after box of Mr Kipling.

Sherwood’s Villa will have a new Ben Sherman shirt on, strutting onto the pitch like they’re heading into town on a Saturday evening after a couple of cans, a Jaeger-bomb and a couple of lines of speed … ready to pull. Hopefully, they end up sleeping it off in a police cell after taking a swing at a 6’8 bouncer who asked them to stop hassling the girls who were just trying to have a nice night out and their new shirt is ruined and torn and covered with crusted vomit and they have no money left for a taxi home so they have to walk and all the people who had a good night’s sleep are out and about, tutting in judgement as they get the honk of stale booze and puke off them as they pass by.

But hey, that’s the best part of six weeks from now. We’ll have plenty of time to discuss all the aspects of our second consecutive final and, of course, spend weeks and weeks on the question of who should play in goal. I suspect we might get asked that today for the Arsecast Extra so tune into that later on for the first round of ‘Who should play in goal?’.

Harking back to Saturday, the manager has explained why he played Mathieu Debuchy, his first game in three months. The French international looked a little bit rusty, and a bit leggy as the game went on (understandably so), but there was method to the [sort of] madness:

Bellerin has played recently with some ankle problems and Debuchy was back so I thought it was a good moment to do it. Debuchy had cramps just before the end of the game but I couldn’t change him, but he is a French international and must be capable of playing in a semi-final against Reading.

At which some people might ask, ‘What about Calum Chambers?’. If an non-match fit Debuchy must be capable of playing against Reading, then so too a fully fit Chambers, but I think there was more to Debuchy’s selection than simply giving Bellerin a rest. Although I don’t think Arsene Wenger would admit publicly that there was anything other than total focus on beating Reading, playing Debuchy also gives him some on-pitch time ahead of a big, big game next weekend.

Having minutes under his belt before we play Chelsea is obviously beneficial and as well as Bellerin has done, I think the manager considers the former Newcastle man his first choice right back and will want to play his strongest defence against Mourinho’s team on Sunday. Especially when they’re likely to have all their injured players back spinning around the pitch.

There’s also a worry over Per Mertesacker who looks to have taken some damage to his ankle. According to Arsene Wenger “it doesn’t look good” and he was pictured wearing a protective boot at Wembley on Saturday. On the TunnelCam video you can hear him talking to Gary O’Driscoll (the club doctor) saying he doesn’t want to risk anything because last time he felt something ‘then it cracked’.

I’m pretty sure he’s referring to a previous incident/injury so hopefully he won’t be out too long, but it’s one to keep our fingers crossed for. Gabriel came in and did pretty well, but at this stage of the season we don’t want any injuries that might mean a player is sidelined for the rest of the games we have left. Especially one with his experience and influence. No doubt we’ll get an update on that during the week.

The Arsecast Extra this morning will look back on the weekend’s game, and everything else besides, but remember if you have questions or topics for discussion, please send them to @arseblog and @gunnerblog on Twitter using the hashtag #arsecastextra.

A couple of people have asked if we could use a shorter hashtag to allow more room for the question and the answer to that is no. However, there’s nothing in the rules that says it all has to be in one Tweet, so bear that in mind!

The podcast will be available for you mid-morning (ish), so stand by for that. More here from me tomorrow, have a good one.