I watched Arsene Wenger’s press conference yesterday, as I do most weeks, and it was nice to see him talk about players back from injury. He confirmed that Mikel Arteta, Mathieu Debuchy, Jack Wilshere and even Abou Diaby were fit and available this weekend.

Obviously it gives him something of a selection headache, but the kind of selection headache every manager would like to have: how to fit all these players into his squad and how he’s going to re-introduce some of them over the closing weeks of the season without disrupting the team’s cohesion and momentum.

The more you watch these press conferences though, the more it seems like the some of the people who have the chance to ask one of the most interesting men in football questions just don’t seem capable of doing that. If they’re not questioning him about things which are completely irrelevant to Arsenal in the hope of a juicy soundbite (‘Had you ever considered signing Ched Evans?’ one my recent favourites), they’re going at him with the blindingly obvious.

Yesterday, in the wake of the Fitness Glut, he was asked, and I’m paraphrasing here: “Do the players, now that everyone’s fit, have to accept that there’s competition for places and that not everyone can play?” 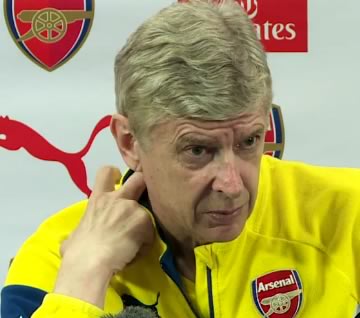 The manager’s face as the question is being asked is a picture and his reply, “I’m surprised you ask me that. It’s just our job”.

A squad of 25 players, all of whom know that only 11 can play at any one time, and only 18 can be involved on any given match-day must have a basic understanding of this fact, right? It’s not as if they were having a fitness banquet to celebrate everyone’s availability when it occurred to somebody that 25 into 18 doesn’t go and 18 into 11 doesn’t either.

“Well, I for one do not accept this notion of competition for places. Certainly not after I’ve spent so much time out injured. I should be playing immediately and every week from now on to make up for all the time I’ve missed. Those guys who have been available all season and are currently playing well have had their fun but now it’s time to step aside and allow the the REDIABYNIFICATION to begin forthwith. Right away. AT ONCE.”

“I’m with you, Abou. Those chancers who have been making goals, scoring goals, preventing goals and contributing to a fantastic winning run need to accept that Jack’s back, baby, Jack’s back. It’s time to put the Wilsh back in his rightful place regardless of their contribution and if they don’t like it, then they can take it up with my entourage and what have you.

I mean, there’s certainly a question there about how he uses the full depth of his squad at this point of the season. There are things to consider like how rotation can allow you to avoid injury by resting players who have been giving a lot over the course of the season. But at the same time there are risks involving players who have been out for so long because they’ll lack some vital match fitness/sharpness and we know it can take some time for a player who has been out injured to regain form.

But asking if the players accept there’s competition for places, well, that’s a waste of a question, isn’t it? Especially as the manager referenced the cohesion in the team’s play over the last few weeks. It’s almost a new challenge for him to deal with this many players fit and healthy – and even guys like Theo Walcott, who have been available, can’t get into the team at the moment.

Still, he’s suggested that these guys will have an impact between now and the end of May. How exactly that happens we’ll just have to wait and see.

Some nice stuff from Robert Pires on Mesut Ozil:

Too many people have criticised him this season and overall since he arrived at Arsenal. I train with him regularly and I can tell you that he is one of the best players I have seen. He loves this club and cares a lot about it. He wants to win trophies here and wants to make the fans happy

Right then, time now for this week’s Arsecast and I’m joined by Tim Stillman to discuss the almost unprecedented situation which sees most of our players fit and not bollixed with injury. How does the manager work some of them back into the side without disrupting the rhythm? What’s the best somebody like Jack Wilshere can hope for this season? We hear from the Angriest Man on Twitter, there’s a very quick preview of the Burnley game tomorrow and all the usual waffle, of course.

To download this week’s Arsecast directly click here – 27mb MP3. The Arsecast is also available on our SoundCloud channel, as well as via the SoundCloud app for iPhone and Android. You can now also find it on the Stitcher podcasting app for iOS and Android. Or, you can listen without leaving this page by using the player below.

The Gent should be back from his Interlullian travels to provide his weekly round up later on, more from me tomorrow as we preview the Burnley game.

Until then have a good one.