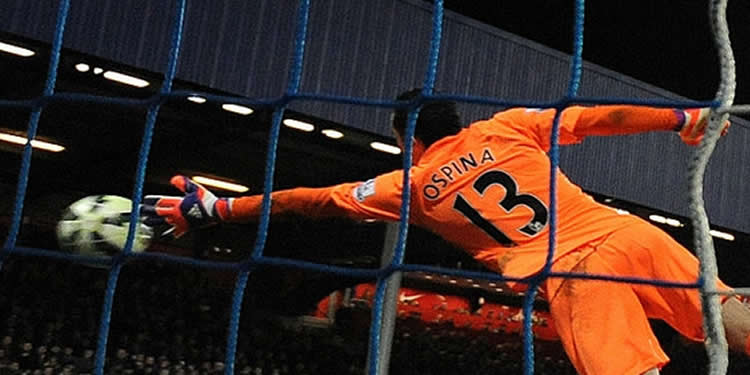 It’s a strange time we live in, where odd stats and facts become news stories. Like the one about David Ospina having the highest win ratio of any player ever in the Premier League. It was everywhere yesterday but what does it mean?

Does it mean that David Ospina is the best goalkeeper the Premier League has ever seen? Stopping things like that stretchy-armed bloke from the Fantastic Four (I can’t remember his name but if he ever released a concept album and it wasn’t called Elastic Fantastic then he’s missing a trick in a big way).

Clearly David Ospina is not the greatest goalkeeper in Premier League history. The stat tells us that he’s played a part in Arsenal’s recent run of form, but also been fortunate enough to come into a team that found both its attacking rhythm and defensive stability. He’s made some good saves and he looks calm, but we no longer look a rickety accident waiting to happen and that’s been playing a significant part in that stat being a thing.

The discussion of him v Szczesny is an obvious one of course. The former number 1 is now cast aside as an afterthought, like some kind of work experience buffoon who somehow managed to con his way into playing 179 games for the club after making his debut as a 19 year old. Such is the way of modern football, one week you’re cock of the walk, next you’re just some cock who was smoking in the showers – which, I should clarify, is an absolutely dense thing to do when your poor performance has played a part in a 2-0 defeat.

Anyway, good on Ospina for taking his chance and that’s what this season has been about in a number of positions, but it’s surely too soon to draw any definitive judgements about him as player. At the start of this season there weren’t too many Szczesny dissenters after he shared the Golden Glove with Petr Cech, look how quickly things change.

We also have to take into account that he’s only been playing regularly for us for a little over three months. That’s no time to really establish a player’s long-term credentials. Not that I’m comparing him to one of my least favourite Arsenal players of all time, but it’s worth remembering the William Gallas captaincy era and, in particular, when we started the 2007-08 campaign so well.

We were sensational that season, playing beautiful football, and I remember people saying Gallas was a great captain. I urged caution, saying it was all fine and dandy being captain of a side that was on its uppers, confident and playing well most weeks. There’s not a lot you need to do when the team is on that kind of trajectory.

It’s when the shit hits the fan that you get a true measure of the man, and when that happened, Gallas turned out to be the worst captain I think I’ve ever seen. His tantrum on the pitch at Birmingham was risible, his inability to consolidate the team in any way after the Eduardo injury and the losses of Flamini and Sagna were more representative of his character than the easy months that had come before. A rising tide lifted all boats, when the tide went out he was found wanting.

Then there was that toe-curling moment when the Sky cameras caught him trying to gee-up the team before a game. “Play your football, play your football” was the mantra as those around him looked like they wanted the ground to open up and swallow them (or him). Player power doesn’t rear its head often at Arsenal, but some intervention meant the manager stripped Gallas of the captaincy, installed Cesc in the role and we all lived happily ever after.

Anyway, my point is not that David Ospina is William Gallas or anything like him, but it’s worth being somewhat cautious with players until you’ve had a chance to see them go through the bad times as well as the good. Tthen you have a better idea of their overall character and ability. Arsenal’s tide has risen Ospina’s boat, but stats/facts which highlight his win ratio, while interesting, get misrepresented all over the place.

A couple of games during which he looks shaky and makes a couple of mistakes will ensure that questions are asked, faith in him will dwindle and we’ll start to hear stuff about how we might need to look at the position. The truth is he’s not been a panacea to our goalkeeping issues but has, to his complete credit, performed with consistency behind a consistent and solid defence with the added bonus of the league’s most in-form defensive midfielder prowling around in front of it.

He’s is not as good as some would have you believe, certainly not the people who tout his win ratio as anything other than the kind of stat that can only occur in the early part of a player’s career; then nor is Szczesny as bad as the critics say either. I’d posit that if he were in the team now, playing with this defence and having attacks snuffed out by Coquelin, his stats would be a lot more impressive (and I agree you can also counter that by saying that his form in the early part of the season contributed to the team’s struggles, but it was far from the root cause in my opinion).

Still, that he’s not in the team is entirely his own fault and I don’t have any sympathy for him. He made his bed, now he’s got to lie in it. Actions have real life consequences and it’s time to learn from them. I do hope he heeds the words of David Seaman though, realising where he is and what he’s got, because I’d love to see himself and Ospina really push each other for the position.

For now, I hope Ospina’s Premier League win ratio remains as high, for all that means for the team between now and the end of the season, while Szczesny has a chance to remind people he’s not Flaps McGee at Wembley on Saturday where an assured performance is an absolute must.

Right, that’s that. I’m off travelling a bit this week, so I’ll be posting from afar for the next few days. Normal service will continue on Arseblog News, and if you haven’t already had a chance to listen to this week’s Arsecast Extra it’s the best one we’ve done since last week so check it out here (and of course subscribe in iTunes or Stitcher) to get regularly. We’re also on TuneIn now if that’s what you use.

ps – this was going to be a post in which I made-up a load of weird stats but I got sidetracked by actual Arsenal stuff. Sorry about that. I won’t let it happen again.