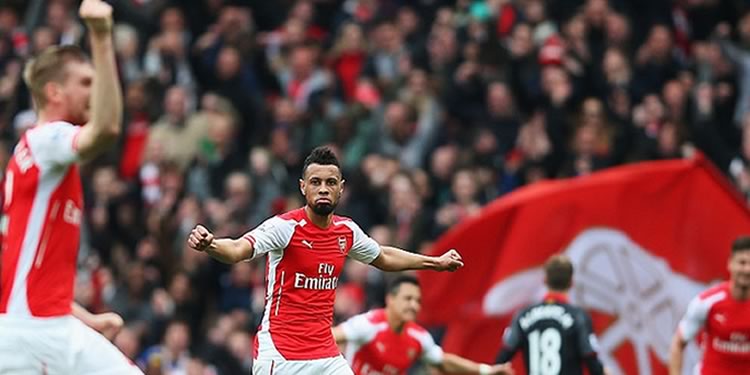 Having been spanked at their place last season, it was nice to return the favour and give them a good paddling. I mean, I really enjoyed it. The Mugsmasher himself did not, but when we went out for beers last night I didn’t press home the point too much although we did discuss their goalkeeper who he, and I’m paraphrasing here, wants to beat about the head with a large stick before throwing him out of an airplane into the propellers of another passing airplane.

He kept them in it early on with a couple of good saves. One from Cazorla was fairly routine, but the one when Ramsey was clean through was a decent stop, despite the shot being weak. It was a cracking start from us, none of this 12.45 nonsense anyway, but having rattled them early on they came back into it and probably should have been ahead when Lazar Markovic, a man who looks like a sidekick from Grand Theft Auto 4, found himself with just Ospina to beat.

He chose to pass to Raheem Sterling who, not willing to do anything that might preclude a move to Arsenal in the summer, pretended that he couldn’t quite reach the ball and the chance went begging. They really should have scored there and, perhaps, that was the bit of luck we needed in a big game that we haven’t always got. And, let’s be honest, knowing you’ve got away with one makes it even sweeter when you do get a goal, right?

The move for our first began with Mesut Ozil who, picking the ball up in the centre-circle, looked up, weighed his options and swept the ball out right to Ramsey. He fed Bellerin who drove into the box, stepped inside a Liverpool defender, and curled a beautiful left-footed shot into the bottom corner. The young Spaniard has been one of the finds of the season and that was his second Premier League goal of this campaign.

Moments later Sakho, a strange mix of positional mayhem and glorious showboating, flattened Ozil outside the area. The German stepped up and curled a free kick just inside the post. I think when any free kick goes in the side the keeper is supposed to be covering questions will be asked about him, but I thought it was a fantastic finish. Admittedly, I’d be disappointed if my goalkeeper was beaten on that side but it wasn’t my goalkeeper so I wasn’t disappointed in the slightest.

Bellerin and Ramsey combined to set up Alexis for the third. The Welshman’s touch and turn from Bellerin’s pass was genuinely superb, Alexis stepped inside the defender and hammered the ball into the net at about a bazillion miles an hour  – it reminded me a bit of Thierry Henry v Man Utd a few years ago. Mignolet could have had 10 arms and he wouldn’t have stopped it, but this was the one the Mugsmasher felt most strongly about.

“Balderdash,” he replied. “He should have saved it.”

“It was over him before he even saw it!”

“He got his hand up in time,” he said, “but he put his hand in the wrong place!”

“I think you’re being harsh. It was unstoppable.”

“I want to beat him about the head with a large stick before throwing him out of an airplane into the propellers of another passing airplane.”

“But then that leaves you with just Brad Jones.”

“You need to stop channeling your inner Captain Haddock,” I said.

“Billions of Blue Blistering Barnacles, you’re right,” he said, and we talked about something else.

I think there are times when you just have to accept that a player hits a ball so hard and so sweetly there’s nothing a goalkeeper can do about it. The half-time chaps on BT Sport were having a go at him too, so maybe I’m the one in the wrong here, but at the end of day I literally could not give a shit either way as it went in and that was Alexis’ 20th goal of the season.

I was interested to see how the second half would play out. Not that 3-0 is a ‘dangerous’ score or anything, but all we had to do was ensure they didn’t score early and if they had more of the ball then so be it. The first part was achieved, and obviously they had plenty of possession but what was encouraging from an Arsenal point of view was that they did very little with it.

We defended well, Ospina had one save to make as far as I can remember, and having controlled the half to our liking for half an hour, when they did score it meant panic stations didn’t set in. No doubt whatsoever it was a penalty and Henderson put it away (just). Should it have been a second yellow for Bellerin? I don’t think so. The ball was already out of play thanks to Sterling’s heavy touch so it wasn’t a clear goalscoring opportunity or anything, but when Anthony Taylor is referee you always have that little bit of fear.

The icing was applied to the cake late on by Olivier Giroud who took a pass from Alexis, cut inside Kolo Toure, and curled a brilliant shot into the far corner to make it 4-1. He’d been excellent all game, his physical presence is so important for this team, and he continued his fine run of goalscoring, that’s 10 in his last 10 games in all competitions.

We had a killing instinct and took advantage of our strong moments in the first half. In fairness we played at a good pace and had some good combination game in the final third. We had many chances on the break that I’ve seen again but in the end it was 4-1 which is very convincing in a very important game.

One of the questions James and I fielded in Monday’s Arsecast Extra was whether or not Arsenal had made progress this season. Three months ago you’d be hard pressed to make a good case for it, but now? Well, we’ve addressed one of the big issues that frustrated people in that we’re winning games against the big sides.

We’ve beaten Liverpool and Man City in the league (more or less ensuring that the former won’t get Champions League football next season), and Man Utd in the FA Cup. We’re a team on a tremendous run of form right now and although there have been disappointments in 2015 with certain games, it just feels like this is a team that’s balanced and capable in every area of the pitch.

Top players are performing well, the midfield functions well and there are tactical changes that work (see Ramsey on the right yesterday), defensive security, and a glut of attacking talent that is firing on all cylinders. There’s always room for improvement, of course, but right now we’re in a good place, playing well, and it’s very enjoyable.

The win leaves us in second until Monday night at least. After that it’s Burnley, an FA Cup semi-final, then a game against Chelsea which is one you look at as the real marker of how this team might carry on for the rest of the season and, with the right additions, what it might be capable of next year.

For now though, we can enjoy the week after what was a superb day’s work and a hugely encouraging win. And Mignolet had no chance for third, bro, no chance.