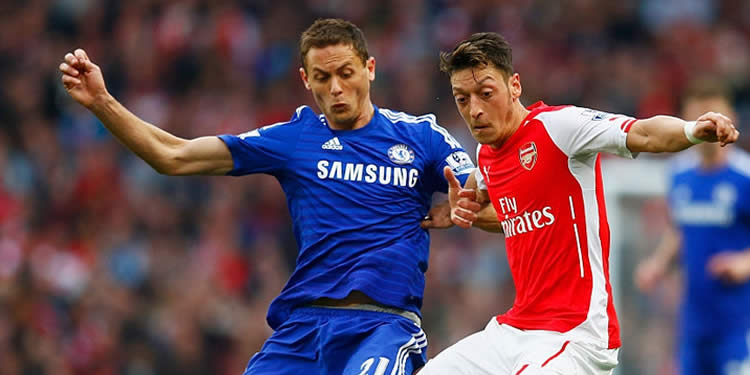 So it wasn’t to be thirteenth time lucky for Arsene Wenger against Jose Mourinho, nor our 9th consecutive league win, but it was a performance which displayed some maturity from an Arsenal side – even when we did have a little flurry at the end with some attacking substitutions.

At the point when Danny Welbeck replaced Francis Coquelin, it was obvious Chelsea weren’t going to see the change as a chance to swarm forward and overwhelm us or anything. And that it didn’t happen until the 77th minute meant there was a touch more caution from Arsene Wenger. Add to that some top quality cynical fouling late in the game to stop them breaking at us, and you can assert that some lessons have been learned from previous encounters.

We all know this was a game Chelsea didn’t have to win, and while it would have been nice if we could have taken the three points, this was also a game that we had to not lose. Even after eight straight wins in the Premier League, it would have been viewed as hugely damaging. As it was, we had our moments when chances were spurned, as did Chelsea, particularly in the first half.

We had most of the ball, they had the two best opportunities to open the scoring. There was one when Ramires found himself with just David Ospina to beat late in the half, but the keeper saved a pretty tame effort well. And, of course, there was the Oscar chance after which he was flattened by the Colombian and an alert (and very quick) Hector Bellerin headed it around the post before it went in.

Should it have been a red card and a penalty? Should has got nothing to do with it. Ivanovic should have been yellow carded for raking his studs down the Achilles of Alexis in the first 10 minutes, but wasn’t. Gary Cahill should have been sent off in the game at Stamford Bridge but wasn’t. Oscar should have been assessed properly after the incident with Ospina because the fact he went to hospital with concussion at half-time suggests football falls short when dealing with head injuries in the game, but they let him play on.

There were some dives. Early on, Oscar went down too easily under a challenge from Bellerin, while the returning Cesc Fabregas got booked for over-egging the slightest contact from Santi Cazorla in the box. Some will say that contact means it ought to be have been a penalty but there’s a difference between contact and a foul. It seems obvious to me, but it’s something used by pundits and ‘experts’ constantly and it appears to be very fluid as to how they use it. Sometimes the slightest touch on the back or the shoulder is enough for a player to go down and it’s deemed acceptable rather than blatant cheating.

Anyway, at the other end we struggled to really create chances. I think we all realise how strong and well organised Chelsea are defensively, and that was apparent against yesterday. It felt like it would take something special for us to get the goal and it never really happened despite plenty of possession in the right areas of the pitch.

It was quite an intense first half, which meant that the way the game dipped in the second period was a bit frustrating. Chelsea were quite happy with a point, they played as cautiously and sensibly as you’d expect. It might well be boring to look at – in fact there’s no question it was yesterday – but I can guarantee you that if we were in that position, playing the only team that could catch us away from home, I’d be quite happy to watch us do exactly the same. There are no points for aesthetics.

They took the sting out of the game, and it was up to us to make things happen. There were some chances all the same. Mertesacker dragged a shot wide after a free-kick was half cleared; Koscielny set up Cazorla on the edge of the box but Santi’s shooting this season has been so at odds with his technical ability and he could only pull it wide of the post; and in injury time Monreal’s low cross from the byline was missed by Ozil at the near post, and the ball avoided Welbeck via a deflection off a defender.

In the end the result seemed very much like a fair one on the balance of the game. It obviously suited them a lot more than it did us (as their celebrations at the end showed), and while there were positives and negatives from an Arsenal perspective, I thought it was generally a decent and sensible display from us. Afterwards, the manager touched on the lack of attacking verve, saying:

Chelsea defended well. I felt that we played with the right intensity in the first half. We dropped that in the second half and came back to the right level in the last 20 minutes. We could have finished the game off. Ozil had a good chance in the final minute of the game but they came to defend well, did it well and everybody knows that. We lacked freedom of mind today. Maybe we were too conscious of their counter-attacking and didn’t play with enough freedom in the final third.

You could say that being unable to beat a Chelsea side who had to play without a striker highlights some of our attacking weaknesses. Would a better quality striker have been the difference yesterday? I’m not sure, really. I wonder if they had played someone like Costa if they’d been a bit more expansive, which might have suited us, but if there’s a manager who can ensure he gets a 0-0 when he wants one it’s Mourinho.

I think that perhaps the outlook was to ensure we didn’t lose the game, and as such we were slightly inhibited from an attacking point of view. Going gung-ho after them would have been risky and if we had been caught on the break the usual accusations of naivety and brittleness in big games would have been quick to follow. From that point of view I think it was a point that we can build on to an extent.

Is there still a gap between the two sides? Of course. That’s obvious from the league table itself. But is that gap as big as it was last season (not just from the amount of points but how we’ve performed against them)? I don’t think it is. We’ve taken steps forward by beating Man City and Man Utd away (even if that was in the cup), and although one point from six against Chelsea is the same as last year, it feels like we’ve been more competitive in the games against them this season.

The next step is to find that extra bit of quality so we can take more points from them, which would open things up a bit in terms of a title challenge. For now it’s another game unbeaten, we’ve got a game in hand on Man City so let’s make sure that’s won as we look to finish the season as strongly as possible.

James and I will have the Arsecast Extra for you this morning. If you have questions or topics for discussion, please send the to @gunnerblog and @arseblog on Twitter with the hashtag #arsecastextra. That’ll be ready for you before lunch-time, so keep an eye out for the alerts.