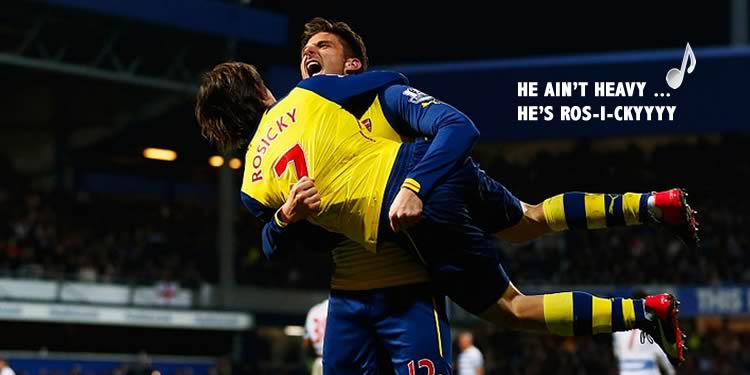 Not our most convincing performance of the season, but a big three points on a night when all the other teams around us also won.

There were a couple of changes to the team that beat Everton with Tomas Rosicky coming in for Alex Oxlade-Chamberlain and Per Mertesacker replacing Laurent Koscielny at the heart of the defence.

Given that we’d struggled at Crystal Palace, it wasn’t a surprise that QPR tried something similar – pressing high and not allowing us a great deal of time on the ball. In the first half that worked pretty well for them, as we struggled to create clear chances and they had the threat of Charlie Austin up front.

Gabriel was faring pretty well against Zamora, who is as sly and niggly as they come, but he did let another one bounce when he should have been more decisive. I think that’s something that he can obviously improve but with a hamstring strain lay-off coming up, they’ve got plenty of time to explain that to him.

QPR had the best chance of the period when Austin fired wide after a smart turn left Coquelin going the wrong way. Ospina was beaten but it flew just wide. The keeper had made a good save a couple of moments earlier when a cross from their right came skidding towards the far post but he got down well to push it away.

The question was whether or not they could keep up that intensity in the second half, and after we’d come to grips with it in the final 10 minutes of the first, it quickly became apparent that they could not.

I don’t know what he thought made Ozil come off his feet like that other than a foul. A small localised tornado perhaps? Maybe a booby-trapped, spring-loaded section of the pitch or a land mine? But it’s yet another in the litany of terrible decisions from this season’s officials. QPR and Henry got very lucky, but I suppose when referees are this bad, why wouldn’t you chance it?

It was just beginning to feel like we might end up frustrated when the first goal came. We broke down the left with Alexis, Gibbs overlapped well, his shot was blocked, but Olivier Giroud was there to bash it home from close range. Not the prettiest goal ever but a very welcome one.

The lead should have been doubled a couple of moments later when Green saved from Alexis, and then after he and Giroud combined to rob the last defender but with just the keeper to beat, the Chilean seemed to doubt himself – when you look at the replays it looks as if he’s trying to play it square to the onrushing Ozil, allowing the keeper to make a save.

Having gone 7 games previously without a goal you did wonder if it might affect his confidence, but not a chance. A couple of minutes after that he picked up the ball in the area, stepped inside and from a ridiculously tight angle whizzed a shot in at the near post to make it 2-0.

After that it was one-way traffic for a while. A brilliant turn and shot from Ozil saw the ball bounce off the post and if anything it looked as if we’d extend the lead. So, in typical fashion, we let them back into it. Koscielny stood off Austin, his shot from distance was hit with some power, but I can’t be alone in thinking Ospina’s efforts to save it looked, well, weird.

He had a good game otherwise, but there’s just something that nags at me about him, and seeing him dive over the ball doesn’t do that sensation any good. Of course the goal meant a more nervous finale than we should have had, and not for the first time against QPR this season either, but we hung on for the three points and our fourth win in a row in the Premier League.

We needed to be strong and get the ball down more, to get back to our game, and we did that better in the second half, I felt it was all us.

We scored two but we could have scored more, we played very well in the second half, and our collective game as a group was good, the chances we created were good and we played with a lot of desire and belief, overall it was a very positive game.

Leaving aside our tendency to make life more difficult for ourselves than it should be, we can’t argue with the points – especially on a night when Liverpool, Sp*rs and Man Utd (with a little help from more hapless refereeing) all won too. The win was absolutely crucial and I think there were some really good individual performances in there too.

At the back Bellerin was exciting again and when the home side’s chief weapon was launching crosses and long balls into the box, Mertesacker had a strong night in the air. Gibbs was very good I thought, Coquelin and Cazorla in midfield kept the ball well against a side which tried to press and on a pitch that wasn’t great, while Mesut Ozil had some sublime moments.

The turn and shot was gorgeous, but the moment when he dinked the ball past the defender and then just ghosted past him to drift into midfield and keep possession was just so wonderfully effortless  – but just to be clear it actually required effort, he just made it look easy.

Another goal for Giroud will do him good and having Alexis back on the scoresheet ahead of Monday’s game against United in the cup is very welcome. It was beginning to feel a little bit like a drought, but form fluctuates and hopefully this will be the start of another scoring spree.

So, all in all, three points blighted somewhat by the injury to Gabriel who will probably miss three weeks with the hamstring strain, but ever silver-lining has a cloud. We should be well used to this by now. It also means we can go to Old Trafford with a bit of momentum and, hopefully, it’ll be a game decided by who plays the best football and not how bad the referee is.

More on that game over the next few days, and I’m back tomorrow with an Arsecast. Until then.