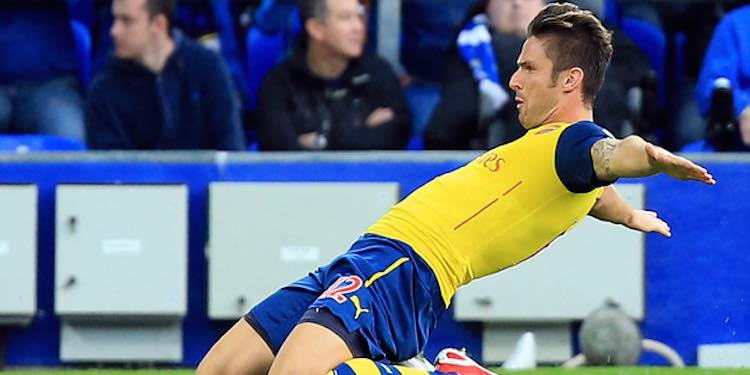 Imagine, for a second, that you are Roberto Martinez. How would you approach today’s game?

Would you be respectful of the elder statesman, the team playing at home, or would you set out to capitalise on a dreadful midweek showing, expose their weaknesses, turn the crowd against them and come away with a point/some very valuable points?

I know what I would do, and Arsenal fans wouldn’t like it too much. So, I think we have to be prepared today for an Everton side that are going to try and exploit the issues that were so obvious against Monaco the other night.

Of course, if you were Arsene Wenger, you’d be expecting exactly that. You’d know that Roberto Martinez seems a very nice fella but this is football management and every single one of them would give you a wedgie if they could. Does that even things out? I don’t know, but I do know we’re going to have be a lot better than we were in midweek to take the points, and if we make the same mistakes then today’s visitors will punish us.

Changes are required in my opinion. The lack of midfield options is a worry for me. I know Coquelin will play the holding role with Cazorla ahead of him, but that’s where the visitors are going to try and get hold of the game so we have to be switched on there. I don’t know that there’s a lot he can do in terms of the personnel he uses (maybe there’s room for Rosicky or Oxlade-Chamberlain), but the way those players are helped and protected could be a lot better than it was against Monaco.

I suspect he’s thinking long and hard about the goalkeeping situation too. Does he stick with Ospina who hasn’t done a great deal wrong since being brought into the team, or bring back Szczesny who, in my opinion anyway, is just a better goalkeeper? It wouldn’t surprise me at all to see the Pole back in goal this afternoon to be honest.

Monreal for Gibbs seems an easy change, and there’s also room to bring Gabriel into the team, but is it for Mertesacker, who had a game to forget on Wednesday, or Koscielny whose Achilles tendons might be shrieking right now?

And then there’s what to do with Giroud. Play him and show faith in his quality – that what happened during the week was just a terrible, miss-tacular accident – or give Welbeck a run up top and take the HFB out of the firing line? Personally I think the 8 goals in 11 before Monaco were a greater representation of Giroud than the dismal showing the other night so I’d keep in the team.

All of these decisions would be easier if you weren’t playing a side like Everton. I know they’ve had a hard season and not delivered on what people expected, but they almost beat us back in August (funnily it was Giroud’s introduction as a sub that helped change the game), and even though they’ve won just 4 in their last 19 you can’t help but view this one as a challenge.

Maybe that’s down to fatalism, having seen us manage to make things more difficult than they really should be time and time again, but I think we’re going to have to work hard to take the points today. We weren’t exactly convincing against Crystal Palace or Leicester, and I think as long as we have this midfield imbalance it’s going to harder for us to control games the way we might like.

However, wouldn’t it be just typical of us today to put in the kind of display we were all hoping to see against Monaco? Our recent form and results have been a lot better than they were in the early part of the season but we maintain that level of unpredictability that makes it so hard to know what we’re going to do and how we’re going to do it.

For all the frustration of Wednesday, our league form has been pretty good recently. We’ve been knocked out of third place by Man Utd who won yesterday against a Sunderland side unlucky to see Kieran Gibbs sent off. A win today would put us back above them and show that this is a side that can respond to what was a massive disappointment in the Champions League.

As I’m at the game I won’t be doing the live blog, however Tim from @7amkickoff will be doing the honours so we’ll still have that coverage for you. Just check back later on for a post with all the details or bookmark our default live blog page and updates will begin automatically.

Right, as I am somewhat crumpened from bourbon, some coffee is in order. See some of you later. And fingers crossed for the right result this afternoon.