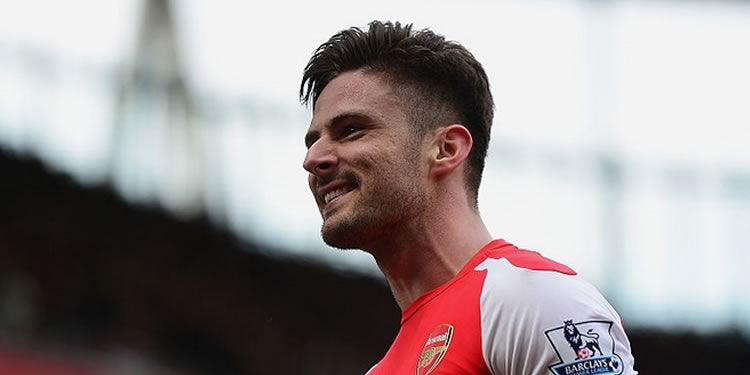 So, a fifth consecutive Premier League win puts us within a point of second place after Man City lost to Burnley (hahaha). Just felt like starting with a laugh.

In retrospect, it probably should have been a bit easier than it was, despite West Ham’s stubborn game plan to sit deep and challenge us to break them down. Which is exactly what we did in the 5th minute when Olivier Giroud’s deft flick played Theo Walcott in.

The England winger, recalled to the starting line-up for the first time since February 10th, had just Adrian to beat but dallied and fluffed his chance. He ought to have scored, but he also ought to have had a penalty when James Collins clearly fouled him (he got away with it because Mike Riley is his real dad, look at pictures, I’m not wrong here). It should have been a spot kick and, probably, a red card, but for some reason Chris Foy thought Theo being booted in the legs was a good tackle.

Later, it was Walcott again whose good run was spotted by Ramsey, the ball into the channel left him one on one again, and this time he got a shot away but it was tame and straight at the Hammers keeper. Later in the half, when an Ozil shot was again saved, it rebounded to Theo who screwed his effort wide. I don’t really buy the excuses that he was rusty because of how long he spent out injured, he scored from a similar kind of rebound against Leicester and that was earlier in his comeback.

To my mind he had a bit of Giroud v Monaco performance, and look, these things can happen. The unfortunate thing from his point of view was that this game was a chance to make it difficult for Arsene Wenger to leave him out of the side in the future, and I don’t think he accomplished what he’d have wanted to.

It looked as if the half was going to finish scoreless when Giroud had enough of it being scoreless and, well, scored. After more fantastic interplay around the box, he took the ball off the toe of Aaron Ramsey, stepped inside, and lashed the ball off the far post and into the net. He’s a player in fine form and the response to being rested at Old Trafford was fantastic.

It meant West Ham had to show some ambition in the second half rather than rely on a break with Sakho that Koscielny and Mertesacker would just snuff out anyway, and to be fair to them they did have a good spell at the beginning of the second period. Credit to Allardyce for convincing Song into thinking he’s an actual footballer but that only lasted a little while before we got on top again, and Ospina really had nothing much to do.

If we’d been better with our final ball the game would have been out of sight earlier, but the goals were coming. Giroud was, of course, involved in the second when it eventually arrived. He dummied a throw-in, did a three point turn, a whirlygig, showed the defender a bit of a how’s-your-father and a how-do-you-do before interchanging with Ramsey which allowed the Welshman to lash home with his left foot to make it 2-0.

On the basis of his performance Ramsey more than merited the goal. He had a fine day and it was good to see a performance reminiscent of him at his best last season. The HFB also played a part in the third, feeding Cazorla like a baby bird which saw the Spaniard play it across goal where Mathieu Flamini had the best first touch of the ball of his entire career to score his first Arsenal goal since last season. Game, set and match except it wasn’t tennis.

It’s a good performance. We controlled the game in the first half, created many chances but couldn’t score. In the second half I felt we were a bit short of energy coming out of the dressing room for a while and West Ham were on top for that period. After, in the final part of the game, we always looked dangerous and capable of scoring goals. We had to patient, organised and steady. Overall we scored great collective goals like we love to play.

I say yes to all of that and despite the fact it was tight-ish until the end it never really felt like we were in any real danger. West Ham were kinda toothless and only for Adrian, who seems to play like Dr Octopus every time we face them, and poor finishing, the game could have been out of sight before half-time.

As well as a decent team performance there were some very good individual ones too. Koscielny, Monreal and Ramsey all caught the eye but Giroud’s centre-forward play was excellent. As I mentioned he’s player in great form:

He drew some praise for the manager who said:

Giroud had an outstanding game today

As well as highlighting something interesting – better relationships as players get to know each other:

What is for sure is that they understand each other much better than six or seven months ago. That makes everybody more dangerous.

The task now is to do exactly the same as we did yesterday on Tuesday away at Monaco. Is it likely? No. Is it impossible? Also no. But still very unlikely.

However, it does show that 3-0 is not a ridiculous scoreline to have to achieve, so we might as well take the momentum of five league wins in a row into that game and just have a good lash at it. Which is about as technical as my hangover will allow this morning, so I’m going to leave it here and take a large German Shepherd (BFGSD) out.

James and I will have an Arsecast Extra for you tomorrow, and fingers crossed everybody loses today. Even the ones playing each other.