That brilliant change of tack, which can transform a career or the fortunes of a team, more often comes from luck and happenstance rather than a sudden, piercing insight. Take Francis Coquelin’s sudden promotion to the first team for example. Only more than a month ago, he was playing on loan at Charlton in League 1 before injuries to key midfielders saw him recalled to Arsenal’s first-team.

For the most part, that has been the story of his six years at the club: seemingly on the cusp of a breakthrough, attitude and application have undermined his talent, until injury to Aaron Ramsey gave him what looked like a final chance, especially with the transfer window opening.

Now, Coquelin has become an integral part of the team, superseding the player who he is thought to be the prototype of – Mathieu Flamini – by offering more snarling aggression and less finger-jabbing.

Of course, that fails to take account of the volatile nature of team-building where pieces shift throughout a season, and fall in and out of place like Tetris blocks depending on momentum, form and injuries. Coquelin’s rise has been likened to Ashley Cole’s (who was presented an opportunity when work permit issues for Sylvinho opened up a space in the squad for the left-back), although in both cases the players’ progress had been tracked, and Wenger must be given credit for instating Coquelin straight into the line-up.

Most importantly, it was a choice less down to luck than about style because as Martin Keown reveals, Wenger had begun to lose patience with the way Flamini continued to drop back into the defence, almost on top of them, instead of hassling and harrying opponents up the pitch when Arsenal lost the ball.

Flamini, despite the posturing, had also become increasingly passive in his use of the ball (though it was accurate, Wenger notably praised the way his partner, Coquelin, passed “through-the-lines” in his first start against West Ham) while the dynamics of Arsenal’s system had changed, demanding somebody more mobile, more proactive in their attempts to win back possession.

Coquelin was the answer, offering Arsenal more in the way of lateral sweeping, generally tending to move across the pitch to fill in the gaps. His elevation to the side almost highlights the way the role of the holding midfielder is in a “state of flux”, as Miguel Delaney writes, because the emphasis in the game has changed to one more about transitions.

As Delaney writes for WhoScored.com, “both Wenger and Sir Alex Ferguson spoke a few years ago about how they felt the position was now about technique more than tenacity”, i.e – those that intercept instead of tackle, now it’s about finding a balance.

Of course, you can argue that that’s always been the case but for a while, with the reign of Barcelona, possession was king and that meant that the player playing in front of the defence had to be proficient at completing 50-60 passes per game. Currently, Coquelin, in his five league starts, completes about 30 per game (though that is likely to increase as against Villa he completed 50/55).

That doesn’t mean possession is valued less now; it’s just that footballers must be all-rounders, to have the skills to adapt to different situations and to play in a multitude of positions. With the technical advancement of defenders, build up starts from the back and that’s certainly the case with Arsenal who entrust their centre-halves to have a lot of the ball. Indeed, as it was revealed in Pep Confidential, the diary of Pep Guardiola’s first season in charge of Bayern Munich, the coach pinpointed the way Mikel Arteta is almost a decoy in the build-up, tending to move up and across the pitch to create space for Per Mertesacker and Laurent Koscielny to pass the ball through to the likes of Ozil and Cazorla.

Coquelin, as Wenger tells us, does the simple job well of getting the ball back and quickly giving to one of the attacking midfielders. His ability to dictate might come into question later in the season: certainly Aston Villa tried to press him early on and he lost the ball on at least three occasions, one of which led to Mertesacker’s clearance for the opening goal. (GIF)

Indeed, that might be one of the reasons why Arsenal are not as dominant in possession currently as they lack the continuity on the ball that Arteta normally provides. In that sense, it’s logical that Wenger has adapted Arsenal’s game so that they are not as reliant on continuous ball circulation in his absence. Certainly, there looks to be a sea-change in the manager’s regard for possession, seemingly abandoning the total domination he began with earlier this season, in exchange for creating greater moments of combination between the five in front of Coquelin.

At times the play was scintillating, particularly on the break, yet despite the 5-0 scoreline, Arsenal weren’t entirely secure and Wenger chose to highlight the “weaker moments” that the team had when 1-0 up, naturally opting to go too safe and dropping off to let Aston Villa have the ball.But there is another weapon which Arsenal have in these moments that lets them get out of trouble and that is the use of the long ball to look for Olivier Giroud. 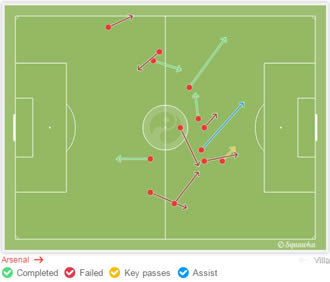 The French striker was always an outlet whenever Arsenal were under pressure and David Ospina certainly obliged, aiming it Giroud whenever the short pass wasn’t on. As against Manchester City, the goalkeeper found Giroud the most of Arsenal’s players yet he showed that he’s more than just the fixed pivot Arsenal used him as last season, and here played as a roving target-man, frequently taking up positions in the channels to allow Theo Walcott to narrow and get behind (GIF here), or drop deep to flick the ball onto runners (GIF here).

After the game, Wenger commented on how Giroud’s mobility has improved, enabling him to be more of a factor in games, while his presence also has a psychological effect on the team, making them feel “safer”.

It’s not just that, his work-rate off the ball is an example to his team-mates who know that the freedom that Wenger grants to the front-line is complete when a striker is as comfortable taking up wide positions off the ball (GIF here).

That final point is important because in this 4-1-4-1 system, Mesut Ozil has no choice but to be deployed on the flanks. It means the German has to adapt his game, learning when to go from out to in than the other way round which he usually prefers when he plays in the centre. In this new role, Ozil then, becomes not a conductor, but more of a balancer, a continuity player than a game changer.

What’s noticeable is that he always makes the right decisions in the final third and is so calm when picking out team-mates. His forte is the cut-back to the edge of the box. With Aaron Ramsey and Santi Cazorla assuming the central positions – two great box-to-box players – the likelihood of finding that pass is increased.

Ozil sacrificing his normal game epitomizes the approach of Arsenal at the moment – it’s all about the team.

Previous articleNew deal for Akpom would be just the start of a long road
Next articleTobacc-oh-no! Plus Mertesacker on Arsenal environment