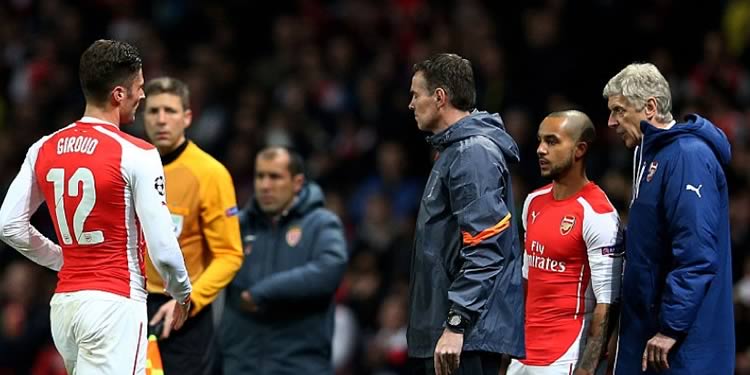 Morning all. A quick Saturday round-up for you, starting with Olivier Giroud who says he’s embarrassed and hurt by what happened on Wednesday night.

The striker had what can only be described as a nightmare night, and says he understands why he was taken off on the hour mark (although interestingly, Goodplaya wrote about this afterwards and wondered, despite how badly he was playing, if it was the right decision), but says he’ll bounce back quickly.

I am really hurting, more than disappointed, it has been embarrassing for me.It was difficult because nothing went right, everything was tough for me. I tried to keep focused but I understood why the boss wanted to substitute me. It was not my day.

When you are a striker people expect more from you. I did well recently and scored a lot of goals, but when you miss chances it is like that – you have to question yourself.

Obviously his failures were put into sharper focus by poor defending but sometimes a player can have a performance like that where nothing goes right. Unfortunately for him, and for us, it happened in the kind of fixture which leaves people asking questions. I think any sensible person would accept that wasn’t at all representative of him in general – especially given the form he’s been in lately – but does the fact it happened in a game of such magnitude suggest there’s a deeper issue?

Was it the pressure and expectation of the night that brought about such a display, or just simply bad timing? I think the truth lies somewhere in the middle, but closer to the bad timing side of the things. There’s no doubt that when this team has an off-day, as it did collectively against Monaco, we see too many things that have happened before to dismiss them as just coincidental. There’s a psychological issue at play.

You can’t talk pre-game about learning lessons from previous European failures and then fail in the exact same way without having the mentality and the team’s ability to cope in this competition questioned. Whether that then has a knock-on effect on certain individuals who played well below the level we know they’re capable of, I don’t know. In Giroud’s case, however, I think it was just a night when anything that could have gone wrong did go wrong, to the point of farce almost.

The decision now for Arsene Wenger is what to do with him on Sunday. Does leaving him out of the side damage him further, or does taking him out of the firing line do him some good? Does playing him give him the chance to get back on the horse (so to speak), or increase the pressure on him to produce?

The manager knows his players better than anyone. Giroud does appear to be a sensitive kind of character, but I’d be tempted to let give him a go from the start tomorrow – this is top flight football after all, you have to deal with this kind of pressure and responding to it positively would be a way of putting the European nightmare behind him.

Meanwhile, it’s emerged that Jack Wilshere has had ankle surgery again. The manager says he underwent a little operation to remove ‘two buttons’ which were causing him discomfort. I’m assuming these might be pins or something rather than actual buttons left in there by Doctor Nick (the something’s connected to my wrist watch … oh oh), but all the same it’s untimely.

Apparently it was due to be done at the end of the season but became necessary to do now. And according to the boss it’ll keep him out a matter of ‘days’ rather than for any prolonged period, so it certainly explains why Wilshere, who was on the bench against Palace, wasn’t involved in midweek.

Still, it’s not difficult to worry that it might be a bit longer than that and that these absences from the team are now raising larger questions. Not so much when will he be fit again, but can he ever stay fit long enough to realise the potential he has as a player. Also, with Mikel Arteta, Aaron Ramsey and Mathieu Flamini still out (although the latter two are back in training and could be available for the midweek game with QPR), it still leaves us short in the centre of midfield for tomorrow.

That’s an area where Everton are pretty strong, they’ve got some good players in there, with lots of physical strength and experience, and right now it’s where we’re weakest. We really have little choice but continue with the set-up as it is, with Santi Cazorla playing deeper than you might like, but perhaps with Alex Oxlade-Chamberlain fit again the manager might see him as an option (after he’s had words about him passing the ball to the opposition all the time of course).

Anyway, more on Everton and what we might do in tomorrow’s blog. A quick plug again for this week’s Arsecast if you haven’t already had a chance to listen, and I’m over for the game so I hope to see a few of you for a pint in the usual spot.

Have yourselves a good Saturday.