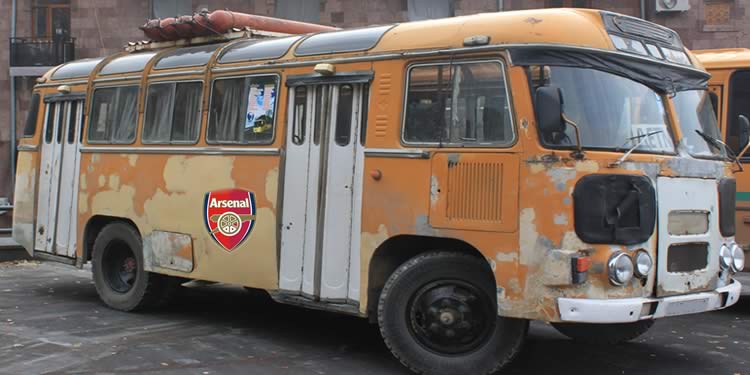 On last week’s Arsecast, in the wake of the new TV deal which saw Sky and BT pay a bazillion pounds for the rights to the Premier League, the discussion turned to the influence television companies have over kick off times. Clubs are at the whim of the broadcasters who make decisions which suit them first and foremost. And there is no second.

What – and more importantly when – they say goes, Any effect it has on fans is irrelevant, regardless of the lip service paid to them in a subsequent press release or statement that only happens if the fans kick up enough fuss for them to bother at all.

Not to be outdone by their more free-spending counterparts, the BBC have got in on the action too, scheduling our FA quarter-final against Man Utd on a Monday night. Ahh, the magic of Monday night FA Cup football. Something we all grew up on, We couldn’t wait for Monday nights. That traditional time for the cup to be on. We all remember our dads and granddads talking about how football on a Monday night was the best thing ever, how they grew up on it. Except, oh yeah …

The inconvenience to travelling Arsenal fans is exacerbated by the fact there are no scheduled trains back from Manchester to London that evening. The club released a statement saying:

In the wake of this announcement, the club is exploring a number of options to help our travelling supporters get back to London afterwards. No return trains are currently timetabled and we will let supporters know the proposed travel plans as soon as possible.

The decision to schedule the game on a Monday evening is made more frustrating because it’s the quarter-finals. There are only four games to be played, so stretching the thing out over the course of three days seems somewhat pointless. Except from a ratings point of view and TV now dictates when games will take place. It is an inconvenience to Arsenal fans but then that’s not a consideration for the schedulers.

What’s the solution? There isn’t one sadly. This is the way the game has been going for a long time and it will continue to do so. Unless people stop going to games nothing will change. Maybe they will push it to the point where it will have an impact on ticket sales, but even then as long as they get the ratings it’ll be worth it to them.

And for a game like this any lack of interest from away fans who find it hard to get time off work, or eschew other commitments, to go will be offset by the home fans who will gladly take up the shortfall for a fixture like this.

It’s a shame that there isn’t something like The Great British Bake Off, Masterchef or a new series of Bergerac scheduled for Mondays on the BBC. Then you can be quite sure FA Cup football would play second fiddle to choux pastry profiteroles, apricot bread, some bloke making a wanky dingleberry jus, or a burgundy car – and played on a day and at a time more convenient to fans, but there you go.

If there is any kind of upside from our point of view it’s that we have a midweek game against QPR in the build-up so this gives us a couple of extra days rest, but that’s stretching it. The bottom line is that it’s a great kick off time for TV, a crap one for everyone else, but we know who wins when it comes right down to it.

Still, maybe this is all part of the brave new world we’ll have to get used to. Tuesday morning football, Thursday mid-afternoon football, Sunday at 1.45am football because TV that’s why. Television, the drug of the nation. Gives me a headache, I’d better take some of that new apartheid remedy.

Other than that not a huge amount going on this morning. We’ll start looking ahead to the Crystal Palace game this weekend from tomorrow onwards, and some team news should emerge over the course of today. I don’t think we’ve got any issues in the wake of the Boro game, and there’s the possibility Jack Wilshere will be back in the squad, but that’ll all be confirmed later.

And finally, thanks for all the feedback on Twitter and via email for yesterday’s post. It’s a shame it had to be written at all, but maybe witnessing those people might make others stop and think about what’s acceptable more often. And that goes for stuff we hear sometimes from other Arsenal fans too. Unless it’s confronted by decent people with zero tolerance, it won’t stop. Lots of small things can be a part of a bigger solution.

Back tomorrow with an Arsecast and all the rest. Until then.