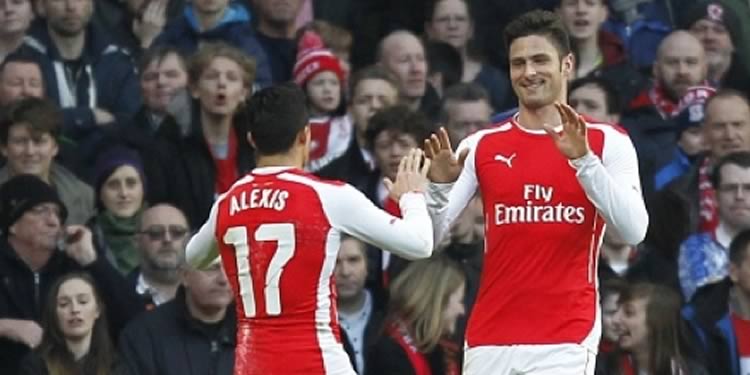 Two goals in two minutes from Olivier Giroud were enough to secure passage into the quarter-finals of the FA Cup yesterday, but the scoreline didn’t really do justice to Arsenal’s performance. Boro’s Spanish keeper Tomas Mejias made a number of excellent saves, and some of our decision making/final ball wasn’t quite up to scratch, but it was a thoroughly deserved win in the end.

It began with the most attacking starting line-up I can remember for a long time. If there was some fear of a team top of the Championship and in great form defensively, the plan was to go at them from the off, and with Giroud, Welbeck, Ozil, Alexis and Cazorla we gave them plenty to think about. I mean, that’s a defender’s nightmare right there, having to contend with the myriad threats they pose.

Cazorla, taking a free kick with his wrong foot, forced Mejias into a good save in the 4th minute and that set the scene for what was to follow. Boro could barely get out of their own half and some of our movement was excellent. It might get lost in the result and the performances of others, but I thought Danny Welbeck was lively as you like before we actually scored. Twice he was in fantastic positions to open the scoring – once Giroud’s pass was too heavy, the second time Giroud ignored him completely and took a speculative shot, much to Welbeck’s annoyance.

However, any frustration with Giroud was quieted when he opened the scoring after a move in which every single Arsenal player touched the ball, from keeper to finisher. 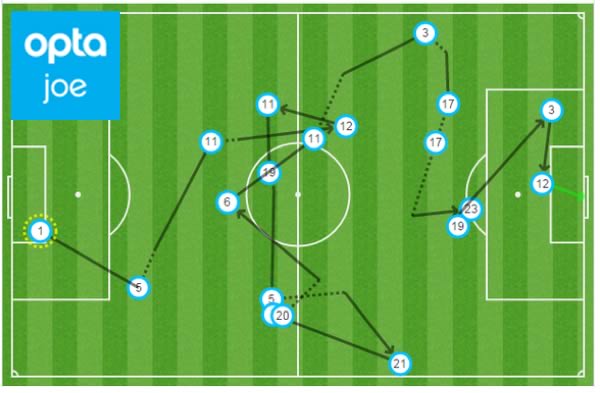 At the time I hadn’t noticed that, only that it was a fantastic move with some one-touch passing culminating with Gibbs cross for the striker to finish, but that’s a really very lovely thing indeed.

Even if Boro must have known the goal was inevitable, it seemed to knock the stuffing out of them a bit as they lost concentration for the second. We had a corner, they completely went to sleep and Alexis, having spotted the run of Giroud, played the ball perfectly to the near post. The finish was superb, a super sexy side-foot made look simple when it was anything but.

The HFB now has 7 goals in his last 10 games and while certain limitations to his game still exist (i.e pace), they’re offset by having quicker players around him like Welbeck and Alexis. He’s doing a big, big job for us right now.

I’ll admit I thought we were going to score more but credit to Boro for taking the sting out of the game at 2-0 and for defending brilliantly at times. It must have been a tough job, some of the interplay between our forward players was outstanding, and there are burgeoning signs of a very tasty relationship between Ozil and Alexis.

Maybe it’s because of their time in La Liga, but it looks as if they instinctively get each other on the pitch. Although Alexis frustrates at times – there was a funny moment in the 1st half when he tried an overly ambitious back-heel in a crowded area and about 4 teammates threw their arms up in a FFS! fashion – his quick feet and willingness to make runs is so important.

And when you’ve got a precision passer like Ozil to find him, oof. There was one laser-guided ball behind the defence after the two of them had worked it down our left, and only last-ditch defending prevented the goal. It’s clear Alexis isn’t currently 100% at the moment, so that augurs well for the future. As for Ozil, he made 7 goalscoring chances yesterday. That speaks for itself.

So when you have those two doing that, and the currently peerless Santi Cazorla behind them, it’s making us fun to watch again. It’s telling that the only way Cazorla can be stopped these days is with a foul. I’d put money on him being the most fouled player over the last 4-6 weeks. He’s an absolute joy to behold though. Defenders usually know which way a player is going to go because they know which foot he’s most comfortable on, Cazorla can do whatever he wants with either foot. I’d say he could build intricate Lego models with them. He’s astonishing at times.

There were more chances for goals, Mejias making possibly the best save I’ve seen this season from a flicked Alexis header, and another one from Walcott who, after failing to do so in the derby, this time took control of a doppelganger of pass from Rosicky. Late on Kike hit the post with a header but as generous as you might feel because of the way we played, to have the sheet dirtied that late would have been annoying.

At the back we had little to do so it’s hard to make any real judgement on new boy Gabriel. The manager said he was playing with the handbrake on a bit as it was his debut, and that’s understandable, but what I saw I liked. Particularly the yellow card he picked up by quite deliberately obstructing a Boro player’s run towards goal. Those are the ones you want your defenders to take, not 5-10 yards later when a foul is last ditch, often in the penalty area and comes with the added bonus of a different coloured card.

The men who came into the back four, Chambers, Gibbs and Szczesny, all did well – although the amount they were tested varied considerably – and all in all it was as comfortable a day as the one against Villa a few weeks back despite what the scoreline suggested.

We controlled the game from the first to the last minute. They had one chance at the end from a header, but overall I’m pleased with the way we attacked, the way we defended and with the way we played together with a good focus for 90 minutes. That’s basically it.

And that is basically it. We played very, very well, and yes you can say it was a team from a lower division, but regardless of who they’re against performances like this are good for the team’s belief and confidence. One of the problems at the beginning of the season was the fact we were drawing too many games. In our last 18, despite some annoying defeats against Stoke, Southampton and Sp*rs, we’ve won 14, the only draw was that game at Anfield.

It suggests there’s a decisiveness about the team that wasn’t there in the first half of this campaign. Could it be that an Ozil with enough rest, with Giroud back from a broken leg, Walcott returned from his injury, Cazorla in the form of his life, and genuine competition throughout the team for places, is creating exactly the kind of dynamic we’d hope for?!

Right, James and I will be here later on with discussion of the Boro game and more in the Arsecast Extra. If there’s anything you’d like us to cover, or if you have specific questions, send them @gunnerblog and @arseblog on Twitter with the hashtag #arsecastextra and we’ll do our best to get to as many as possible.

In the meantime have a very Santi day, whatever you’re doing.