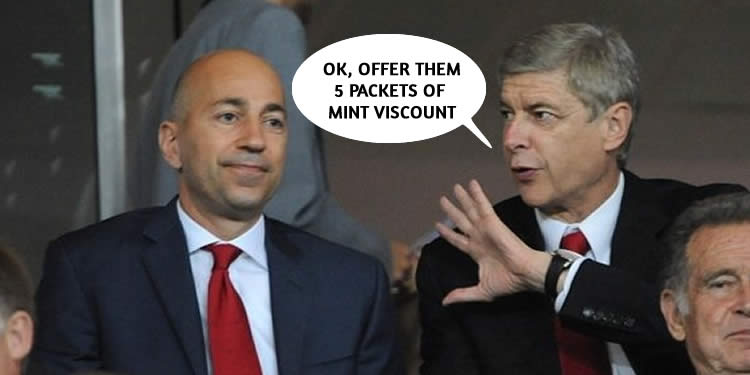 It’s been something of a quiet week so far, which, I suppose, is to be expected in one way. After the hustle and bustle of Christmas and New Year, it’s normal enough that things will chill out for a bit when you’ve got a full seven days between games. Especially when it’s a week when the analysis consists of of ‘Yeah, we beat Hull’.

On the other hand, given that the window is well and truly open, there’s always the hope that we might interrupt the quietude with some, you know, transfer business. It’s not as if we’re not in need of a player or two. But so far, there’s been nothing much to report other than players going out or potentially going out.

Podolski’s gone, Sanogo looks like he’ll be off even if we’ve gone past Bordeaux’s deadline for a decision, and yesterday there was talk of Joel Campbell interesting both Real Sociedad and Villarreal. Could David Moyes use his skills in the English language (he’s almost fluent) to broker a deal with Arsene Wenger? We’ll see. It wouldn’t surprise me if we did let him go, even with the Podolski and Sanogo situations as they are. He’s been a bit part player and that’s been reflected in his selection this season.

On the incoming side of things though, it’s been deadly quiet bar the 17 year old Polish lad and some talk of Loic Perrin, a 29 year old from St Etienne who, at 5’11, doesn’t provide much in the way of height even if he’d be experienced back up to the first choice central defensive partnership.

So, the question is, why haven’t we bought anyone yet? A very good question. Some possible answers:

1 – We’re doing a deal with somebody but it’s more complicated than we thought and it’s taking longer than expected. The club in question are playing hardball, they don’t want to lose a good player in January, we’re offering them 10 shillings and six-pence and some tokens for the London Eye.

2 – The manager hasn’t yet decided exactly what we need. For most it’s obvious that a centre-half is crucial but the last time he spoke about signings he referenced midfield when asked where he might be targetting:

If you look at the number of games some players played and the injuries we have with Wilshere, Ramsey and Arteta, we are a bit short at the moment in midfield

3 – The right player hasn’t just fallen into our lap. Rather than being as proactive as possible, we’re putting some feelers out and seeing what happens:

We know that the manager won’t buy for the sake of buying. He’s done it before and it hasn’t always worked out that well, so do we laud the decision not to bring in another Sylvester or bemoan the lack of foresight? It’s easy to imagine Arsene Wenger testing the transfer porridge. This one is too hot, this one too cold, this one too sweet, this one has bits of granola on top, this one is made from a GM oat crop that is causing environmental damage, this one was not prepared to the exact specifications as set out in ‘The Art of Porridge’, this one too salty, this one … etc. There’s always a reason not to find the one that’s ‘Juuuuuuuust right’.

4 – We have summer targets and don’t want to make signings now that would get in the way of those. Perhaps, despite the short-term need it also makes sense to think about the longer-term impact. Do we get a centre-half we sort of want now that then makes a summer arrival more complicated? Which leads us to:

5 – We’re looking at players available on loan because we don’t want to get tied down to a B or C option on a permanent basis. Possible, I suppose, but the loan market in January is essentially made up of players who are no longer wanted by their parent clubs and usually it’s because they’re not good enough to get into that team, which makes you wonder if they’re good enough for us. Can we be that picky? Isn’t somebody better than nobody, or are the emergency options we’ve got enough for the manager to pass up on a reject from another club. I think he thinks the latter.

6 – We’re not going to buy anyone at all. It’s now January 8th. The window closes on February 2nd and rather amusingly that’s GroundHog Day (thanks to @ArsenalWarChest for pointing that out). Could it be that we simply don’t have any intention of doing any business in this transfer window? Would it really surprise you if we went through this month without spending anything?

“Koscielny’s Achilles tendons are better, Chambers is developing well, Debuchy is fit again, Bellerin is an exciting prospect, Per has found his mojo, Arteta will be back soon, Coquelin has grasped his chance and shown his quality, and let’s not forget that when he emerges from the cryo-chamber Abou Diaby will be, literally, like a new signing.”

Maybe that is the most pessimistic, glass half-empty, outlook but deep down there’s part of me that wouldn’t bat an eyelid if we went through this window without spending. And as I said on the Arsecast Extra this week, even if we do splash the cash I’d be more shocked if we got a defender than a midfielder, and if the midfielder wasn’t somebody who preferred to attack rather than defend I’d be amazed.

Anyway, whatever the reasons thus far, it’s a bit of a shame we haven’t done anything early. We hired Brian McDermott as a scout a few months back and I had thought the rationale for that was to ensure we found players to bring in in January because the need to boost the squad was so blindingly obvious.

We play Stoke on Sunday and if we beat them then fine, we’ve got more leeway, a bit more time; but should the result not go well, rightly or wrongly people will talk about the need to improve the squad and wonder why we couldn’t get things lined up and done as soon as the window opened. That will be the biggest failure rather than whatever we did to cock up the game itself.

Back tomorrow with an Arsecast.