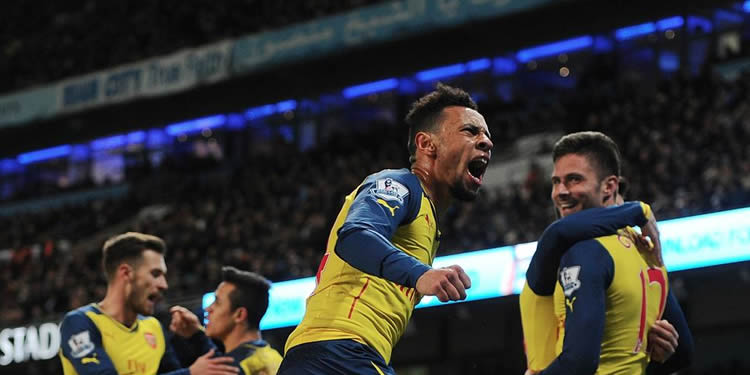 Same old Arsenal eh? Away game against one of the big clubs and we … er … hang on … we … we … we play like a cohesive, well drilled unit and win.

I don’t know about you but I really, really enjoyed that yesterday. At first I was a bit wary of City having so much of the ball because that generally isn’t a scenario that works out that well for us. In the early minutes they found a couple of passes between the lines and Koscielny got a yellow card for steaming through Fernandorama (or whatever his name is), and I thought this might be a long. long day, but soon it became apparent we had a plan.

Francis Coquelin sat deep as the other midfielders dropped off when they had the ball, denying them the space to unleash their creative players, and we basically snuffed them out. Afterwards Aaron Ramsey talked about a plan whereby they’d push Man City into wide areas and deal with the crosses. As you can see, that worked: 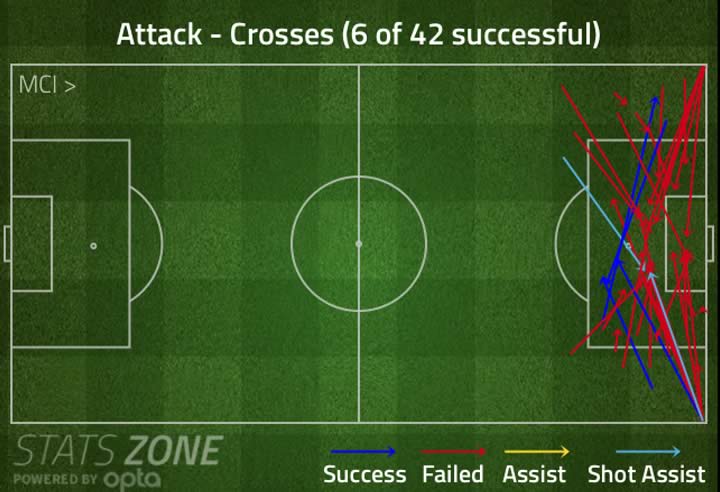 City put in 42 crosses, we dealt with 36 of them and the 6 that were ‘successful’ were no threat. Similarly, corners. They had 16 of them, usually a source of intense pressure for us, but we dealt with them impeccably. The zonal marking, so lampooned and ridiculed in the not too distant past, worked perfectly. It shows that it’s not a problem with the system, only the execution of it, and in that regard we were close to flawless yesterday.

It was funny to read some City fans accuse us of ‘anti-football’ afterwards. Not that I give a fish’s tit what they think, but it’s not something that’s often levelled at us. One of our biggest flaws in recent seasons has been our apparent unwillingness to adapt our game to the opposition. So we go and try and play ‘our football’ against opponents who know exactly how to deal with, and exploit, that.

Yesterday was not one of those days. A manager not renowned for his tactical flexibility set up his team to nullify City’s creativity and main threats (Silva and Aguero) and it worked. We allowed them the ball in their own half, we kept our shape, and as soon as they tried to find a way through the middle we either forced them into crosses from wide or we tackled with vigour and won the ball back.

Defensively we were as solid as we’ve been for an age. 50 clearances, 23 headed clearances, we won 25/41 aerial duels in the game, made 35 interceptions, 68 ball recoveries, 5 blocks, and while stats never tell you the true story of the game, those numbers tell you everything you need to know about the commitment we showed as a team. There wasn’t a man out there who didn’t do his job with the utmost discipline and concentration.

After the game Arsene Wenger spoke of ‘regrets’ because he felt we could have made more of some of our attacking play, and there was a rustiness to elements of it. Alexis didn’t have his best game going forward, Ramsey and Oxlade-Chamberlain were guilty of poor touches in good positions, but it didn’t cost us because when we did get into their half, we always looked pretty dangerous.

The first goal came from the penalty spot when Vincent Kompany clearly fouled Nacho Monreal. I don’t really understand why people are saying it’s soft or even not a penalty. Probably because Kompany is a nice guy and people overlook his clumsy antics. Remember, it was Kompany who lost possession in the build-up to the penalty by falling over his own feet then his awkward challenge on the left-back conceded the spot-kick. Other players would have been crucified if they’d done that.

Santi Cazorla stepped up and gave Joe Hart no chance even though he went the right way. City couldn’t respond before the break, but in the first few minutes of the second half the game became more open as the home side pressed for an equaliser and we took a few minutes to get used to their change in system after the ineffective Jovetic came on for the ineffective Milner.

Their most dangerous moment came with a cross from the right which saw a Koscielny touch take it away from Aguero and some other bloke, rolling not far wide for a corner … which we dealt with. And although Alexis had a quiet day by his standards, it was his burst through the middle that won the free kick for the second goal. Cazorla chipped it in, Giroud’s movement bewildered Fernandito (or whatever his name is), and his beautiful glancing header gave Hart no chance.

They brought on that bloke who pretended to go to New York (imagine swapping the chance to live there for Manchester – *makes swirly do-lally gesture with finger*) – and Dzeko, but they continued to fail to bother us unduly. I won’t say it was comfortable for us, but the way we played made it really difficult for City to make any kind of breakthrough.

By the end we were keeping the ball in the corner, the experience of Rosicky winning us free kicks to help count down the clock, and that away win against one of the big clubs that we’ve all been waiting for was finally under our belts. Nobody could deny we deserved it on the day, City were poor, we were excellent as a team as well as certain individuals having particularly outstanding performances. More on that anon.

We scored the first goal today and it was much easier for us to control them. We always looked dangerous when we won the ball but we had a good solidarity level and a good compactness, and the regret of the day is that we didn’t always take advantage of the situations we created in the final third. There was room to maybe score more goals.

And on the significance of the result:

Time will tell. What is for sure is that it increases the level of belief and confidence. We have five months in front of us that are very important in the lifespan of the team and what you make of that will decide our season. Games like that can help you to do very well.

Obviously it was a hugely encouraging performance and it should provide us a blueprint for games like this in the future. We can’t play like this in every game – we don’t need to, in fairness – but when the circumstances dictate it’s something we’ve just shown we’re capable of. If other managers had done it we’d be hearing about how it was a tactical masterclass.

It’s hard to single out individuals after such a fantastic team performance, but there were one or two who were worthy of an extra mention this morning. In yesterday’s blog I said that this game would be a big test for Francis Coquelin. Consider that test well and truly passed with flying colours. Sometimes football surprises you, and timing plays a role in a player’s success or failure. Without injuries to Ramsey, Arteta, Wilshere and Flamini, Coquelin would most likely still be on loan at Charlton.

However, a door opened for him, a chance presented itself and he’s grabbed it with both hands. It’s to his enormous credit that he’s now become undroppable because it’s his performances that dictate that, not the unavailability of others. At right back Hector Bellerin looks to be improving with every game and the decision to start him was justified completely.

I thought Giroud had a great game both in terms of his hold-up play and the fact he scored a great goal. He’s been criticised for not doing it against the best teams, but he did yesterday (on top of a goal against United). Some of his touches were sublime, particularly late in the game when we needed the ball to stick up front.

And then there’s Santi Cazorla. A tiny magician with amazing feet, brilliant ball retention, and despite his size he wasn’t bumped or bothered by City’s clutch of Fernands. There were moments yesterday when he won the ball deep, kept it, eased the pressure on the defence and then provided an attacking outlet in the same move. A goal and an assist are the most obvious contributions he made yesterday, but what he brought to that result went way beyond that.

So, plenty to be pleased about, but what I liked most of all is that every player I’ve seen interviewed after the game said ‘Yes, this was great but we have to do it in the next game’. Our plan yesterday was excellent, we executed it to perfection, and pulled off a fantastic result. But this wasn’t a cup final. They’re three very welcome points obviously, and I’d like to think we might have broken a little psychological barrier by doing what we did away at one of the big boys, but they’re only three points.

We have to use this as a building block for the future. It was great, I loved it, there’s much to enjoy this morning and I’m going to do exactly that, but what I’d like more than anything is to see the commitment and discipline we showed yesterday replicated game after game after game between now and May. We’ve got to take the positives and learn from them, not rest on our laurels.

If we can do it at City, there’s no reason why we can’t do it everywhere else.

As usual, we’ll have an Arsecast Extra for you later this morning discussing this game and anything else that crops up. If you have questions, please send them to @gunnerblog and @arseblog on Twitter using the hashtag #arsecastextra.