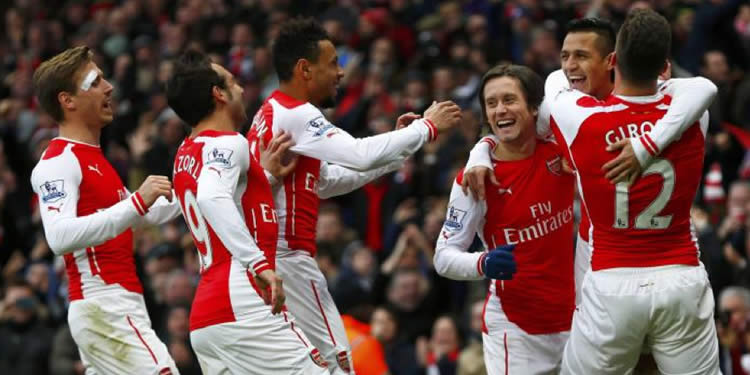 As I touched on yesterday, home games against Stoke are never quite as traumatic as those away, and yesterday’s turned out to be one of the most comfortable wins we’ve had over them, or anyone, for quite a while.

The goalkeeping story was resolved with David Ospina getting the nod which obviously meant Szczilk Cut, Giroud came back in the side after suspension along with Koscielny and Oxlade-Chamberlain, while Francis Coquelin kept his place in midfield.

At their place we conceded after 22 seconds. This time it was obvious we looked to control the game from the off and in the first five minutes Begovic had to save from Alexis and the live-wire Rosicky. Too often we’ve failed to build on that kind of early momentum, but not this time.

From the corner won by Rosicky’s shot, Koscielny kept the ball alive, gave it back to Alexis and darted back into the centre of the area. The Chilean’s cross put the ball exactly where it needed to go and the defender’s point blank header gave the Stoke keeper no chance. It was his second league goal of the season and helped quell any nerves we might have had.

As usual, Stoke were physical and when Marko Arnautovic pushed Mathieu Debuchy in the 13th minute we saw the consequences of that. I’m sure he didn’t mean to cause a dislocated shoulder and his too little, too late social media apology rings pretty hollow this morning. The fact is Debuchy was off his feet, the push was hard and deliberate, and the outcome was a serious injury to the Frenchman.

On Sky, Alan Smith said, “Oh, he’s landed awkwardly”, without any mention of the fact he wouldn’t have if not for the shove by the Stoke player. I keep reading this morning about how Debuchy was injured in a ‘collision’, which is nonsense. It’s like when people say of Aaron Ramsey or Eduardo, “He broke his leg”, rather than “He had his leg broken”.

The push was unnecessary and dangerous and we’re likely to be without the former Newcastle man for some time. Whether or not the FA deem the incident suitable for further examination remains to be seen, but shoving a fellow player, while he’s off his feet, into the advertising hoardings really ought to be something they look at and punish retrospectively. I’m not going to hold my breath though. As for the fat excuse of a referee not seeing it, well is anybody surprised?

If there was a fear we might be unbalanced defensively by the introduction of Hector Bellerin, it was unfounded. The young Spaniard looks to be growing in confidence with every appearance. Yes, he’s still quite raw but he looks more assured on the ball, his tackling and tracking back is getting better and he acquitted himself well for the rest of the game.

Nor did the change do anything to disrupt our attacking rhythm as we continued to threaten the Stoke goal. Oxlade-Chamberlain fizzed a shot just wide, Giroud saw Begovic make a great save after being set up by Alexis before firing another one wide from a Rosicky pass, until Alexis decided to stick to the Orcs.

When N’Zonzi took a heavy touch he nicked the ball off him, leap-frogging a scything challenge from the Stoke midfielder, played a one-two with Rosicky, drove into the box and finished between Shawcross’s legs to add that bit of hilarity to what was a goal of the highest quality. I love Rosicky’s reaction to it too.

Crouch then split open Monreal’s face with one of his sharpened elbows, making it three elbows to the face in total in the two games this season. Maybe it’s his gormless Timmah face that sees him get away with it, but he is consistently one of the dirtiest players we ever play against. If he looked different, more feral with a Gerrard brow and bit of an underbite, he’d probably have a very different reputation.

The game was put to bed early in the second half when we won a free kick on the edge of their box. The referee, despite his can of special paint, couldn’t manage to get the Stoke wall back the requisite 10 yards but that just made the goal all the more enjoyable. Alexis stepped up, hit it low, it rebounded off a Stoke leg, hit the bottom of the post and Begovic could only fumble it over the line. No less than they deserved, given that we couldn’t, in all good conscience, jab them with needles we picked up in a crack den.

Crouch went through the back of Coquelin after having a half-chance at our near post, but that was about as close as they got to a goal all day. There was time to bring on Theo Walcott for Oxlade-Chamberlain and the England man will be hugely disappointed not to have kick-started his season with a goal. Yes, he’s been out a long time but he should have done a lot better with the chance created for him by Alexis.

There was also a return for Mesut Ozil, a much stronger looking Mesut Ozil too, and he almost got on the scoresheet as well. The chance wasn’t quite as clear-cut as Walcott’s but Cazorla’s beautiful pass found his run but the right-footed shot flew wide. There was also a moment of nonchalant genius from the German, and it was good to see him back and get some minutes under his belt.

Overall, I must say that everybody played very well. The only negative today is that we lost another experienced defender with a dislocated shoulder. That gives us a problem because we are already short of experienced players at the back.

It’s interesting that he said Debuchy’s injury won’t impact on his transfer plans because he’s already on the market for a defender, but to lose him again is a blow. If there is an upside is that it’s not an area we’re particularly short in with Calum Chambers (sick yesterday) and the ever-improving Bellerin. Nevertheless, it probably adds a little urgency to any potential deal, and if we could get something done in time next weekend that would probably be ideal.

In general, I’m not sure we learned a great deal from yesterday’s game that we didn’t already know. Alexis is bordering on genius, a £30m fusion-powered bargain who is the driving force of this team. We look better when Mertesacker and Koscielny are together; Monreal is an underrated left-back, and a committed brave player who didn’t let the facial injury inhibit him in any way; Coquelin merits his place in the side ahead of Flamini right now; and Santi Cazorla’s form is joyous.

As for the goalkeeper, he didn’t have very much to do bar one save at the end from Stephen Ireland, but what he had to do he did well enough. He didn’t appear at all intimidated by the opposition but then that’s as much down to us not letting us bully their way into the game as anything else. Will he keep his place? Probably. He didn’t do anything to lose it and if the manager has decided to give him a go because of Szczesny’s behaviour then I guess he’ll stay there for now.

What was most pleasing about yesterday though was the way we played. We were hard-working, creative and full of industry – the kind of football people have associated with us for so long but that we haven’t seen much of this season. Obviously it’s too early to say we’ve clicked, but the performance, along with players like Ozil and Walcott coming back from injury, made yesterday a very positive day indeed.

As usual, we’ll have an Arsecast Extra for you later this morning discussing this game and anything else that crops up. If you have questions, please send them to @gunnerblog and @arseblog on Twitter using the hashtag #arsecastextra.