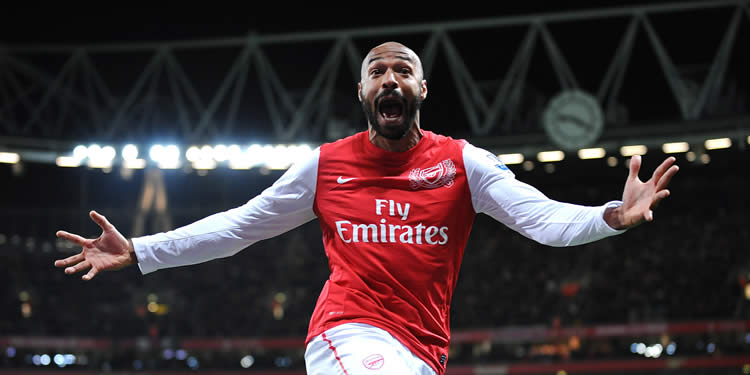 I was having a dream where I was interviewing somebody for a podcast when I realised halfway through I wasn’t using any microphones so I had to pretend for the rest of the interview that a matchbox was a small recording device. Then, the person I was interviewing excused themselves, ran outside and stole a taxi – much to the ire of the assemblage of taxi drivers who were standing around smoking cigars and ignoring all the people who wanted taxis.

They then came back and said it was because they were cold and they had to go home and get a jumper and I had to start the interview again. The thing is though, they weren’t wearing any kind of jumper at all. Total spoofer.

Anyway, it’s all still Thierry Henry this morning and after yesterday was filled with as much Thierry Henry stuff as you could possibly imagine. Thierry’s best goals, all Thierry’s assists, amazing Thierry facts you might not have known, and loads more. If you didn’t do all that yesterday, do it today. It’s nearly Christmas and your boss is expecting a drop in productivity anyway. And if you’re your own boss, you know exactly what I’m talking about here.

Now, leaving aside the work he’ll be doing for Sky Sports – and I assume he’ll be involved a lot in Arsenal games – he spoke about coming back to Arsenal in some capacity, perhaps as manager one day, and he said:

That would be a dream come true, but that’s not how it works. ou have to prove yourself first, you have to learn first. You need to be able to understand what it is to be a manager.

The plan is to start my badges and I guess Arsenal will help me. To pass your badges, you have to work closely with a club and I would like to think it is going to be Arsenal. You know I’m in London when you see me at Arsenal. First and foremost I don’t know how or when, but everybody knows I would love to go back to Arsenal in some capacity. But I need to be equipped to go back.

All of which makes perfect sense, and tallies with the quotes from Arsene Wenger which I carried in yesterday’s blog, but given that he’s going to be in London it’s a great chance for us to strengthen ties with a former great, even if it’s on a fairly informal level at first. There are no guarantees that great players will become great managers, but when you look at Dennis Bergkamp and Patrick Vieira doing well in their post-playing careers, it’s hard not to put Thierry in their bracket. Not only was the footballing ability there, but the intelligence too.

Interestingly, Gilberto spoke about being offered a chance to come back as part of the coaching badges/education process, saying:

I spent six years at Arsenal, which was a great place to learn. I have it as a reference point and a football model. I have had an invitation, yes. Anything is possible. It makes me happy when you have these invitations, and it makes me want to learn from others, seek knowledge and develop my own style.

So, if we’re open to Gilberto’s return as he makes his way post-game (although he wants to have one more season playing before he officially hangs up his boots), it’s impossible to think that someone like Thierry wouldn’t be granted the same opportunity. Not only that, something we touched on in the recent live Arsecast Extra was the lack of succession planning, for want of a better phrase, when it came to the playing staff.

When the likes of Henry, Bergkamp, Pires and Vieira arrived at the club, they were educated in what it meant to be Arsenal by the players steeped in the tradition of the place. You know the names, there’s no need for me to go over them, but the Invincibles were broken up too quickly and some of that was lost along the way. What did captain William Gallas know about what it meant to be an Arsenal player other than he didn’t want to play for Chelsea any more? The best he could bring were pitiful team-talks and tantrums.

Now, that’s not to say the players we have now don’t understand, I think there’s a much better sense of the squad knowing the club than there has been for a long time. We’ve got players who have grown up here, but to have that bit of something extra, the memories of Highbury and the years of success, that’s what having Thierry Henry around the place can bring. The mentality to go further, do better, try harder – even if it’s only half a percent that can be the difference between three points and none.

So, while I’m all for him learning his trade, getting his education and his qualifications, I do hope that we find a way to have him involved in some way. Maybe it’ll be difficult with his TV work, something he’s obviously chosen to do, because of notions of impartiality, but then Gary Neville has been involved with Man Utd until quite recently and everybody knows his connection to that club, regardless of what he says on-air, is unbreakable.

Whatever we need to do to ensure that he doesn’t end up at another club, giving them the benefit of his experience and quality, we need to do it. It’s notable that Arsene Wenger is fairly reluctant in general to just give jobs to the boys, even if they’d love to come back, but some cases are special and this is certainly one.

Right, that’s yer lot for this morning. Till tomorrow.