This week the sad news reaches Gentleman Towers that the legendary striker Terry Hennessy, the Dudley Dynamo, has finally hung up his boots. I thought I would pay my respects to this titan of a player by recalling his life and career, from the filthy, rat-infested streets of unimaginable poverty in Dudley to the home of football. 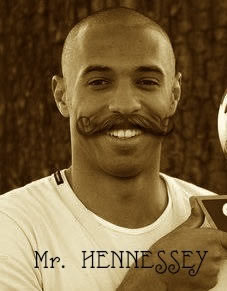 Terry was born to Maggie, a farm-worker without a farm, and Bill, a rat-catcher, who found plenty of business in one of the world’s worst slums, Dudley in the West Midlands. This is an area where three or four families would share one room, supper would be boiled rat and a day out would be a visit to the municipal dump. It was on one of these days out that Terry, aged but three years, broke free of his mother’s hand, flicked a bean tin into the air, controlled it on his knee, then dribbled his way through the massed ranks of his brothers and sisters before setting the ball up on his right foot and curling it around Big Soft Bob, the village idiot and Dudley glove butler.

A local scout from Wolverhampton Wanderers, a team now sadly lost to the mists of time, signed him up on the spot and he was immediately sent to the team’s ‘academy’, which was in fact a large jerry-built shed in the manager’s back garden. Here he proved academically adept, and took examinations in Ancient Greek, Latin, Applied Mathematics, Advanced Physics and Organic Chemistry, as well as becoming the world’s youngest chess Grandmaster. His qualifications in mathematics and physics certainly helped his football, as he remains the only player who could draw a graph of one of the goals he had scored and describe the physics behind the strike.

Because people from Dudley are generally not blessed with footballing intelligence, they stuck him out on the wing, where his talents were somewhat wasted. He was scouted by Woolwich’s manager Alan Windsor and he became an immediate sensation. He won two league titles, three FA Cups, he was World Player of the Year six times in a row, was moustache wearer of the decade and was awarded the Dukedom of Highbury by Her Majesty the Queen.

He won a number of lucrative advertising contracts including Triumph Motors, where he invented the slogan, for the Triumph Stag, “Plenty More Spunk”. In a now famous advert, he holds up two sausages, one small, one large, and says, “This one has plenty more spunk than this one”, indicating the smaller of the two sausages. The catchphrase swept the nation, with people saying that lots of different things had plenty more spunk.

He was of course part of the Invincibles, along with Glove Butler Longman, left-back Hävmörmönissön, half striker Dionysus Bergton-Camper and midfield colossus Padhraig O’Feery, not to mention Oscillating Wing-Bandit Dr. Robert Powers. All combined to create a team with such prowess that their feat will never be surpassed.

And of his goals, which is your favourite? October 2000, sending the goalie to Coventry, he received the ball from Giles Grimsdyke, flicked it up, swivelled like a ballet dancer before flicking it over that clown Barthez. Wonderful. Or perhaps in 2004 when he left the entire Liverpool team sucking their thumbs? But then there was November 2002, when he picked up O’Feery’s clearance in his own half, destroyed Matthew Etherington’s self-belief forever, glanced at Stephen Carr who went running hoe to his mummy, and then stroked the ball, like a father caressing the head of a new-born infant, except with this foot, inside the post. He then slid on his knees to enrage the peasants of Middlesex, who no doubt burnt down their own town later that day. An event struck in bronze outside the Emirates Stadium.

Undoubtedly the game’s greatest of all time, and the brouhaha about his retirement will only be surpassed when Robbie ‘The Master’ Keane finally hangs up his boots.