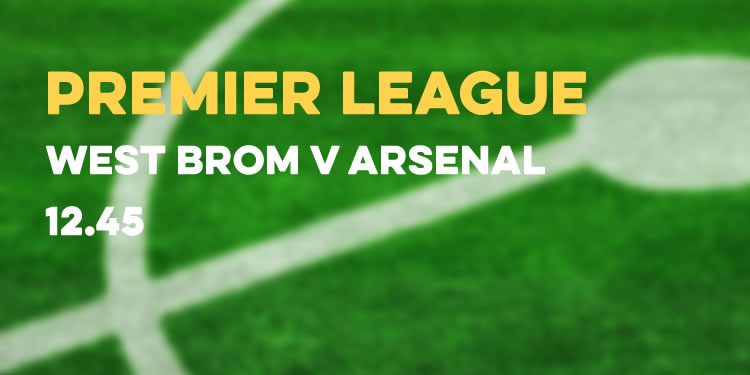 Morning all, a quick Saturday morning preview/round-up for you. After a good win in midweek against Dortmund, we’ve got to take the positives from that and take three points back to London as we visit West Brom today.

That we’ll have to do that without Mikel Arteta, Jack Wilshere, Theo Walcott, Mesut Ozil, Mathieu Debuchy, Wojciech Szczesny, David Ospina, and with doubts over Yaya Sanogo and Danny Welbeck, will probably make it more difficult than it should be, but that’s just to provide some context, not to make any excuses. The players we have available are capable of getting the right result.

At his press conference yesterday Arsene Wenger said that Laurent Koscielny is fit to start if he decides to start him, and it must be tempting. Although Nacho Monreal did well against Dortmund, I think the sooner we can restore a more natural central defensive partnership the better. If he does pick the Frenchman, we could see an Arsenal team along these lines:

There’s certainly scope to add someone like Tomas Rosicky to the team if you wanted, but I think from what we’ve seen so far this season the manager doesn’t particularly want to. We’ll have to wait and see what news there is of Danny Welbeck who was due a fitness test on his swollen knee yesterday, but either way I have a feeling the manager will go with Giroud today.

The win in the Champions League should have restored some confidence. If you can beat a team which turned you over so comprehensively a few weeks previously, if does rid you of some doubts. And it’s also easy to see how we might replicate the performance. We didn’t do anything spectacular but what we did we did with purpose and common sense. Away from home it’s easy to get caught out as we saw against Swansea, but you’d like to think we’re capable of learning the lessons for more than one game.

Make sure the defence gets the protection it needs from the midfield, maintain the discipline in terms of the overall shape of the team, and add some more efficiency in the final third and we’ll take the three points today, in my opinion. It’s not been the easiest place in the world for us to go over the last few seasons and we’ve had some very difficult games there. We should expect the same today, but I do think if we can pick up where we left off on Wednesday evening, we should get the result we want.

At his press conference yesterday AW was asked if he had any nerves about this being an away game at 12.45 – the same time you might remember as the debacles at Anfield and Stamford Bridge (and I think the Everton defeat was a 1.30 KO). He dismissed the kick-off time as a factor, saying those results were down to other things going wrong.

Football fans, as we know, are a superstitious bunch and that this is the first time we’ve had one of these kick-off times this season will worry some people, but on this I tend to agree with the manager. Getting spanked by Liverpool and Chelsea had little to do with when we played them, and everything to do with how we played them. That both games began early was coincidence, nothing more. If we’d played them at midnight and played the way we did we’d have been thoroughly paddled too, so today’s early start doesn’t worry me – it’s whether or not we can avoid making the costly mistakes we’ve tended to make this season that concerns me.

Let’s hope we can do that.

In other news, the manager spoke yesterday about the upcoming transfer window. I know it’s still some time away but I suspect the clamour for us to do business this January will be greater than ever. Can we find the centre-half we need? Will that DM so sought after be found and available?

In January, it is even more difficult because players are even less available than in June or July. But we will try to be creative and have one or two good ideas. We will, of course, try to get at least one body in.

I know I’ve said this before but I don’t have any issue at all with the money we spent last summer, and we did spend quite a lot of money. It’s sort of overlooked because the focus is on what we didn’t spend. The players we bought were good players, one of them was an absolute outstanding purchase whose contribution is being enjoyed but not as much as it should be because we keep offsetting his awesomeness with moments of outright poo (sorry for being so technical).

Having brought Brian McDermott on board last month to scout for us you have to think that he’s been tasked with finding potential January recruits because in order for this team to be as competitive as it should be, the squad needs the requisite depth. That we have to get to the period when we make purchases in good shape is the first challenge, the second is doing that business efficiently and quickly when the time comes [insert your own quip here].

Finally for today, with Thierry Henry apparently considering his retirement from playing, he’s hinted at coming back to Arsenal in an off-field role. There are some interesting quotes from him and the manager, worth a read.

Ok, as always we’ll have full live blog coverage of the game for you later on. Check back with a post which has all the details, or bookmark our default live blog page and updates will begin automatically.