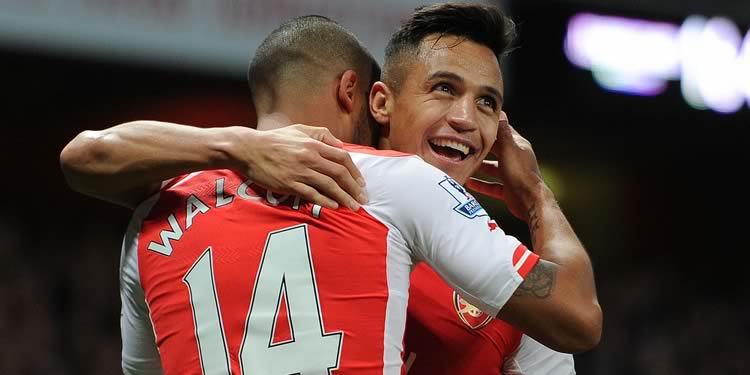 Morning all, it’s a brand new week, with Champions League action to come tomorrow night, and on the back of another weekend win and another clean sheet we can be a little more encouraged about where we are.

Of course a clean sheet against a newly promoted, likely to be relegated, bottom side (not to mention the one the previous week against a Sunderland side that had just been hammered), isn’t any kind of landmark achievement, but nonetheless it will have done some good in terms of confidence and belief which were in short supply.

There’s some interesting stuff from Arsene Wenger on man of the moment Alexis Sanchez and the goals he scores. He said:

He finds the resources to get you a goal when it’s 0-0, that’s what is important. It’s always very interesting when you look at the number of goals people score – how many times do they score at 0-0? They’re the guys who can really make the difference.

Some players are masters of the icing on the cake goal. I remember a period when Tomas Rosicky would do that, grab a goal with the game won to add some comprehensiveness to the scoreline, but Wenger is right about Alexis. 6 of his 10 goals have been the first goal of the game. Besiktas was the only goal, and he scored first against Leicester, Southampton (Capital One Cup), Hull, Sunderland and Burnley.

His strike against Man City put us into the lead in that game, and although he scored Arsenal’s third in the 4-1 romp over Galatasaray, it was his assist which set up Danny Welbeck to open to the scoring. He is, by any standards, a remarkably effective player and one who has hit the ground running at his new club.

The job now is to help him maintain that form and that’s down to the players around him. While I understand some of them reminding him that there’s no winter break in English football, I think their first thought should be to make sure that he’s not left carrying the burden all on his own. Don’t try and hold him back, go with him. When you have a force of nature like that in your team, you’d best be unleashing his elements, not putting up umbrellas. Or something.

Perhaps easing Theo Walcott in the team again will help alleviate some of the goal-scoring burden on the Chilean. The England man does have the knack in front of goal and we’re not really getting much of a midfield return so far this season. Aaron Ramsey got three early on, but he’s been sidelined, Jack Wilshere has one to his name, as does Oxlade-Chamberlain, but Santi can’t buy a goal while Arteta and Flamini aren’t renowned for their scoring exploits (even if the skipper is a reliable penalty taker).

The issue is how quickly we can expect Walcott to start producing. To be fair he had some nice moments against Burnley but there was no pressure and they knew the game was done. And after so long out there’s the danger that rushing him back in might mean he picks up another little injury – something that’s easily done when you’ve been out of the game for as long as he has.

There’s some talk of him being called up to the England squad later this month, and rather surprisingly the manager doesn’t have any objections once too much is expected of him:

If Theo wants to go, I’m happy for him to go and practice and maybe get a few minutes. Mentally, it will help him. Is he completely ready? I think it is a bit early but to be in the squad will be good for him.

I don’t really see a problem either, as long as England don’t Sturridge him. It’s going to take a little while for him to find real fitness and then match sharpness, so the more he’s involved the better to help build that up. Naturally there’s caution and you don’t want to do anything that might risk a setback, but at some point you also have to let the player play.

If we look back at Robert Pires as an example, after he did his cruciate in 2002, he made his comeback against Auxerre in the Champions League as a second half substitute. Over the next six weeks of Arsenal’s busy schedule (coincidentally at around exactly the same time of year as we’re bringing Theo back – and Pires was injured in March, not January), his run went: Sub, Sub, Start, Start, Sub, Start, Sub, Sub, Start, Start – at which point he began to start games on a much more regular basis.

I suspect we’ll see something similar with Theo. The Champions League game tomorrow night is a good opportunity to give him some more minutes off the bench; the same with Swansea next Sunday. Then we have have an Interlull, and it’s Manchester United and when you look at their defence the temptation would be strong to give him his first start as they come visiting. Either way, it’s good to have him back and I’m sure they’ll be as cautious as they’ve ever been given our current injury situation. Maybe this is where the Shad effect will be really seen.

James and I will be recording the Arsecast Extra a little later this morning, so feel free to send us questions on Twitter to @gunnerblog and @arseblog with the hashtag #arsecastextra. It’ll be cooked, ready and plated for you before lunch.