Arsenal fans clamouring for a new defensive midfielder might have seen significance in Mikel Arteta’s substitution on 63 minutes in the 3-0 win over Burnley, or at least, the symbolic nature of it. Because Arteta was once the undroppable; the metronome in a team who love to pass the ball. At one point too, Arsenal found it difficult to win games without him, further highlighting his influence. Yet niggling injuries this season mean he hasn’t been able to exert his style upon the team, while at the same time, Arsenal’s approach has changed too. They tend to pass the ball more methodically now which means as a result, play has become at times a little sterile. Naturally, this should see Arteta slot seamlessly into the side, yet it’s the other way round when Arsenal defend, which sees him not quite find a place.

In recent games, Arsenal have switched the formation to a 4-4-2, with Alexis playing behind Danny Welbeck and Mathieu Flamini and Arteta screening. It’s provided a neat balance, with the work-rate between the four players enabling the change. Alexis and Welbeck hustle and harry up top, while Flamini and Arteta covers. The strategy going forward, though, has much remained the same as what it was under the 4-1-4-1: the ball is moved patiently from side to side, using the whole width of the pitch and chances are fashioned of high quality: via cutbacks or shots from an angle into the corner. Alexis went close three times in the first-half with such efforts, looking to bend the ball into the far corner while Santi Cazorla missed another three opportunities from balls played in low by Oxlade-Chamberlain.

The game became a little stretched at the start of the second-half with Arsenal increasingly affording Burnley chances on the counter as they sought to force a breakthrough. As such, it was no surprise when Arteta was withdrawn. He doesn’t have the mobility of Flamini, who was impressive as a destructive force in front of the defence, though this time in a dual role, covering for Gibbs when he scampered forward and generally looking to break up play. With Ramsey entering the fray, Arsenal probably needed as many runners on the pitch as they could find and Flamini, as the story goes, was signed on the basis of his astronomical fitness levels. In this system, in a sense, his role is not too different to what it was back in 2007-08, when he was such a pivotal figure at the back of the midfield, picking up loose balls and recycling play quickly.

The Gunners are reverting to a possession approach having flirted with the idea last season of a compact, cautious approach. The influence is distinctly German with Arsene Wenger is looking to emulate bits of the national team/Bayern Munich model (a tactical line which borrows from Dutch 4-3-3 model) where the attacking line occupies the width of the pitch, thereby always creating angles and options to pass to. As Leighton Baines says, in an interview for The Guardian when talking about Everton’s philosophy which goes along the same branch, “the really top teams who have mastered this way (Dutch Total Football), are the ones that gets success.”

On the other hand, emphasis on death by possession makes it tougher for Arsenal to defeat teams as often; opposition defences are set thus making it more difficult to get through. It has made Arsenal more sterile in effect, one of the things Wenger has previously striven to avoid. However, he has probably come round to see it as a necessary evil because sterile domination has also its benefits: if you pass it well, then it also protects your team from the counter-attack. This is where the Flamini/Arteta suitability comes in.

Both have their uses in the system but against Burnley, possession would be expected to come as standard and rather, the main threat is when you lose it, when there is more space to defend. Flamini made a couple of fantastic interceptions in the first-half, one acting as the last defender when he got into position quickly to poke the ball to Wojciech Szczesny, which probably made up Wenger’s mind on who to keep on. Flamini’s role, though, was doubly important, because not only was he the enforcer, but he provided cover for Arsenal’s play down the left-hand side.

As Calum Chambers reveals, the full-backs for Arsenal have more responsibility getting forward this season, with both players getting assists against Burnley not to mention Chambers’ goal, though, it’s on the left-hand side where most of the action happens. Here, the Gunners tend to leave the flank open for rotations, with Alexis or Santi taking turns to fill in or Kieran Gibbs aggressively pushing forward. On the other side, the partnership is more traditional with Oxlade-Chamberlain tending to hug the touchline therefore there is less demand defensively. 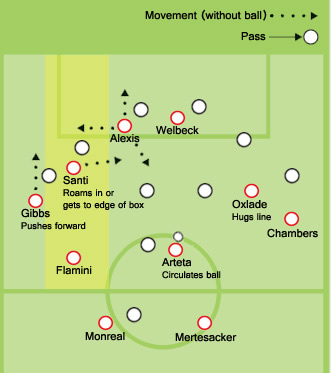 Flamini, though, on the other side must remain conscious of the space that Gibbs, Cazorla concede when they vacate their positions and against Burnley, he did this really well. The GIF here demonstrates that and though it’s Arteta winning the ball back, Flamini remains disciplined to cover for Gibbs. The subsequent passage of play shows what the perfect positioning should look like when a team is playing with two attacking full-backs with both Arteta and Flamini remaining disciplined and working the ball from side to side. “We’re trying to attack as much as we can from full-back positions,” Chambers told Arsenal Player. “For me and Kieran to both get goals [is good]. It is something we’re working on – to be more attacking and get forward more – so it’s paying off.”

It’s interesting how the tactic will evolve especially with Ramsey returning. Wenger seems determine to keep it much the same with his recent comments urging Ramsey to play with more discipline. He certainly has the stamina to provide cover for when moves break down but for Wenger, it seems Ramsey’s natural role would be to eventually become the successor to Arteta in terms of playmaking. Wenger says goals for Ramsey should be a “consequence of the quality of his game. A midfielder is a player who defends well, attacks well and keeps his priorities right.”

The other issue is how long the 4-4-2 is here stay. Certainly there’s scope for more variation within this Arsenal side, but Wenger’s words seem to suggest that if not for a few select players – namely Alexis – the 4-4-2 would be hard to pull off. Indeed, it’s probably telling that when Theo Walcott entered the fray, along with Podolski, Wenger didn’t stick with a front two, instead reverting to a 4-2-3-1 with Cazorla behind Alexis.

In any case, Alexis showed with his two goals how important he is to the side. It’s not that he just scores; he creates, dribbles and has a predilection to the left-hand side as per a certain Thierry Henry. Certainly, his influence is becoming as large to this team as Henry’s was to previous sides. Generally, though, Henry had a prodigious midfield base to provide for him the platform to flourish in Vieira/Petit or Vieira/Gilberto. In the two games so far with the 4-4-2, Arteta and Flamini have too, provided the freedom for Alexis to cause damage.