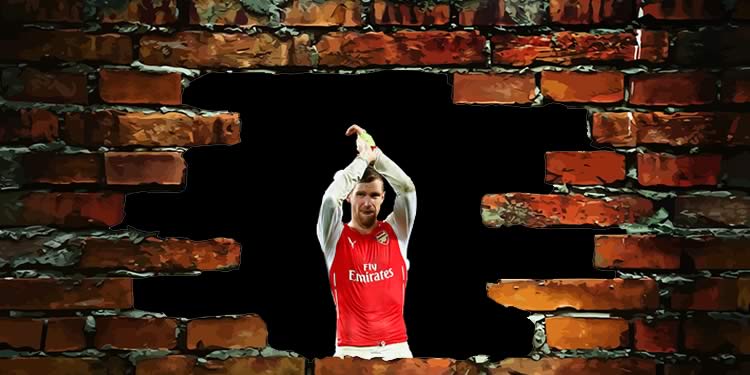 Until the next time. At which point one of them might as well just come out wearing a t-shirt saying ‘FRANKIE SAYS LESSON’ and each question is answered with:

Amidst all that though, there was a pearl or two of wisdom from Per Mertesacker who spoke about the need for the team’s defensive focus to improve. It’s been played out in some quarters as a blast at the forwards, which is kind of misrepresenting what he says, but basically he wants everyone to be switched on when we find ourselves trying to defend a lead. He said:

When we drop sometimes everyone has to be involved to defend. You can’t afford for just five or six players to defend, or just the back four. We have to defend better as a team.

And on how it played out on Tuesday:

As you could see, even in the final third, when you do not put them under pressure, they can deliver good balls through the middle. They can cause trouble and we just left them playing. So in general that was the problem

I think it’s clear that our defence is one that’s pretty makeshift right now. A left-back at centre-half, a 19 year old at right-back in his first full season starting games, a centre-half in Mertesacker whose qualities are enhanced when he plays with Laurent Koscielny but whose flaws are more exposed without him – that’s an issue in three of the four positions.

Under those circumstances you would think that the first idea would be to protect them as much as possible and not leave them exposed but that wasn’t the case. Perhaps it was because the manager knows his defence is weak that he felt the best way of doing that was to bring on another forward like Podolski to try and get a goal. I can’t say I agree, I’m just trying to find some strain of logic to his substitutions, but it’s pretty clear that the team’s attitude is based on the instructions they get from the manager.

This appears to be a ‘The best form of defence is attack’ strategy, as outline by this snapshot of Arsenal in the 89th minute, just before they score the equaliser: 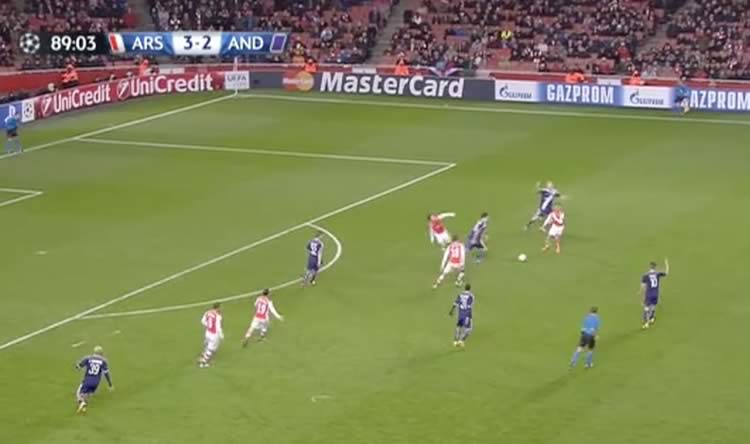 Play breaks down, they take a quick free kick and we have five men ahead of the ball in the last minute. We don’t need to score, we simply need to ensure they don’t. Say what you will about Lukas Podolski’s half-hearted effort to stop the cross which led to the goal, but that’s our centre-forward chasing back to defend the area where a left-sided player should be. He didn’t do enough, no question, but we weren’t organised and we paid the price.

I don’t think we got enough in terms of leadership from some of the experienced players on the pitch who really should have known better than to go chasing around like a schoolboy outfit at that point in the game, but the mindset comes from the sideline. This is what they’re encouraged to do, this is second nature to them, defending becomes an afterthought and the team is now suffering for it.

In the first half there were at least three occasions when an Arsenal attack broke down, they countered and were at the edge of our box within seconds as we desperately chased back to defend. Calum Chambers made at least two important blocks in his own area to snuff out danger. For all the talk of bringing in a DM with power and pace, you’d need to sign Superman to cope with the space we leave the opposition. It is just too easy for other teams to create danger from us trying to create danger.

The solution? I don’t really know, other than to point at that period at the end of the 2012/13 season when we’d been torn apart at home by Bayern and well beaten by that lot at White Hart Lane. The problems were the same. Susceptibility to the counter attack, massive spaces and gaps for the opposition to exploit, conceding too many goals thus making it more difficult to win games.

What we did then was change the team’s focus. Ramsey sat close to Arteta in midfield and provided energy, hard work and tackling as a shield for a back-four. We were less gung-ho in attack, we didn’t find ourselves overrun or exposed the way we had previously. It had a somewhat negative effect on us as an attacking force, we scraped wins by a goal here or there, but in the end it worked and, I believe, provided the platform for the team to go on and top the table for a long time last season (even if it didn’t have the ability to go all the way in the end).

Now, I think we’ve got better attacking options and I don’t think that side of our game would be as adversely affected, but until we do something to sort out our defensive issues we’re going to drop more silly points and we’re going to struggle. It makes everything more difficult when you feel like you could concede at any time. When you’re having to score four at home to win you know there’s a serious problem and the answer is most definitely not to set up the team to score even more.

It’s trickier this time around because we don’t have the defensive options we had back then. Mertesacker flanked by Chambers and Monreal isn’t anywhere near as solid as him having Sagna and Koscielny outside him, but then that just makes it even more important that everybody does their job defensively. That we don’t go chasing stupid goals we don’t need, that we don’t get caught with five men ahead of the ball in the last minute, that simple things like team shape, organisation and, crucially, instruction are based in common sense, not overly-ambitious flummery.

It has to come from the manager, it has to be worked on in training, because otherwise this is going to be a long season indeed. It might sound crazy, but sometimes defence is the best form of defence. We ought to consider it.

Finally for today, I’ve been nominated for Blogger of the Year in the FSF Awards. If you could see your way to giving me a vote here, that’d be much appreciated (and you should give a vote for Amy Lawrence as Writer of the Year too!). Thanks.

Back tomorrow with an Arsecast and all the rest.