It’s difficult, and not a little painful, to chart the beginnings of Arsenal’s love affair with self-destruction. Like all psychological scar tissue, I think it arrived unexpectedly and at the hands of those most familiar to us. In October 2008, Arsenal led an ailing Spurs side 4-2 as the Emirates clock ticked to 90. Tottenham, under new manager Harry Redknapp, were anchoring the Premier League. Arsenal’s Alex Song came on as an 88th minute substitute for Samir Nasri. The two exchanged a high five and Song flashed a grin at his teammate. Job done.

We all remember, reluctantly, what happened next. In the aftermath of that 4-4 draw, Arsenal chucked away two goal leads in two of the five North London derbies that followed. Like a car crash victim that winces at the sound of onrushing traffic, the trauma haunted Arsenal and left an indelible mark. After that 4-4 draw with Spurs in October 2008, the excellent football365 website dubbed Arsenal “The Braindeads” due to their hilarious proclivity towards grenade juggling. Indeed, at times Arsenal have reminded me of this timeless Simpsons scene.

I decided to investigate just how unique this problem of surrendering comfortable leads is to Arsenal. For better or worse, when analysing your own club, it’s easy to think that you are the sole purveyors of weakness. All issues are “chronic” and don’t happen to other teams. Other goalkeepers never make mistakes and everyone else has “a beast at DM” who “could do a job” (the most witless assumption in the footballing repertoire) for your team. But everyone seems to agree that, whilst this sort of misfortune happens to others, Arsenal are the market leaders for implosion.

Taking a starting date of 29th October, 2008, the fateful day that we tossed away a 4-2 lead against Tottenham, I looked at how many points Manchester United, Chelsea, Liverpool and Manchester City had surrendered from two and three goal leads in all competitions. (Arsenal reserve the sole distinction of having thrown away a 4 goal lead in this time). These results happen to all teams from time to time, but how much more often does it happen to Arsenal compared to our competitors? The results in the tables below make interesting reading:

*Of course there is the odd cup game in here, so it’s not always “points” that are lost, strictly speaking, but I decided to keep it as a useful metric. 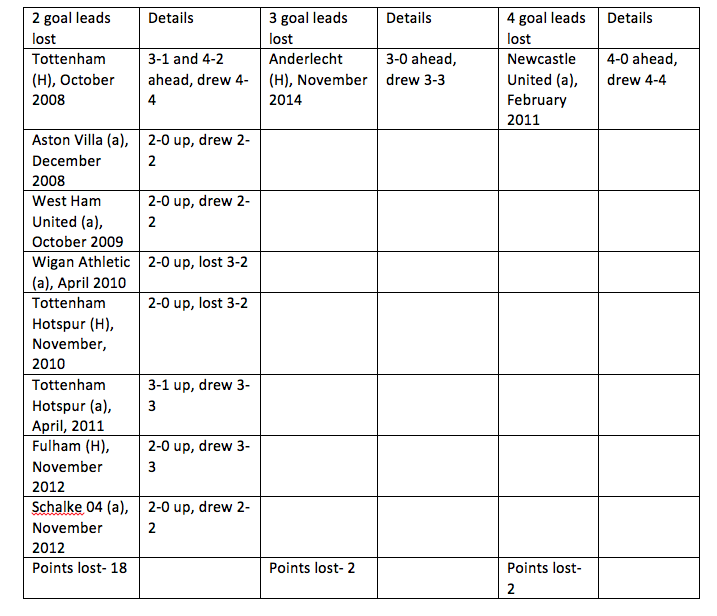 You may even be able to annex a subjective argument against Arsenal when browsing the quality of the opposition listed, but nevertheless, it’s clear that “this sort of thing” happens to Arsenal more than it happens to the teams around them. It’s interesting that Manchester United are (an albeit distant) 2nd place in that table of clusterfuckery. It likely reveals one of the main reasons that the Gunners seem so much more vulnerable to the gutsy fightback. United and Arsenal are typically attack minded teams.

You’ll notice that none of United’s implosions occurred on David Moyes’ watch. Arsenal and Manchester United have also had more opportunities to blow commanding leads in games. Manchester City didn’t really become a force until around 2011 and Liverpool have had a couple of meandering seasons in that time period meaning, frankly, the sample size of two and three goal advantages is smaller. There are less knives with which to juggle. Chelsea meanwhile, have largely been a more conservative outfit, erecting a wall of muscle in front of their goal.

It’s no secret that Wenger prefers for his teams to be intuitive. In the long term, he believes there are greater benefits in letting players work things out for themselves. It does have its many benefits too, as can be seen by the numerous careers that have been resurrected and the score of young talent that has blossomed under his care. However, tripping over wasps’ nests is an occupational hazard of this approach. The iron fisted yin inside the velvet gloved yang of Wenger’s coaching manual. Perhaps it bears some pragmatic reconsideration.

Perhaps there has to be an acceptance that yes, the players do need to be spoon-fed certain pieces of important information from time to time. Perhaps they do need to be told that it’s not necessary or desirable to have 5 men ahead of the ball in the 89th minute when 3-2 ahead and under pressure. Maybe he doesn’t have the level of player that can rely solely on self determination to mitigate weakness. It’s easier said than done of course, particularly from my platform of zero coaching experience, but perhaps it’s time for a more blended approach?

Wenger admitted himself that he felt that the comeback was always on for an Anderlecht side that have won just one of their last eight matches. What is worrying for the manager is that different teams containing different sets of players are becoming infected with this appetite for self-mutilation. This incarnation is no longer a team containing talented, yet flaky characters like Almunia, Song and Denilson. Calum Chambers was the only player in the Arsenal side with under 100 professional appearances on Tuesday evening. It wasn’t even a particularly young team.

Perhaps in hindsight, we were too harsh on the former members of the deadwood corps. Because unfortunately, the common denominator here is the manager. Even Per Mertesacker, one of our most battle hardened, trusted lieutenants earned a tongue lashing from captain Mikel Arteta on Tuesday night. Mertesacker was very slow in heading back towards his own goal as Anderlecht staged a first half counter attack. Arteta sprinted back to fill in and once Monreal had raced over to make an interception on the German’s behalf, Arteta punched the air and remonstrated very angrily with the German. Wenger said after the game that the Spaniard was one of the only players that defended seriously and it’s not a coincidence that our collapse coincided with his injury.

In truth, the draw with the Belgians ought not to make a difference to the group. Arsenal should still finish 2nd, as expected, whereupon they’re likely to make their annual exit in the last 16 to a superior side. Wash, rinse, repeat. But the long term ramifications of such a surrender are obvious. Arsenal are a side that require confidence to make their style work. As a result, they take this sort of blow very, very heavily and take a very long time to recover. I would be absolutely amazed if we saw anything better than a business like performance at Swansea on Sunday.

The sheer amount of times that we let commanding positions slip, as I have documented above, shows you that that fear of capitulation seems to linger. There is going to be a trust issue for the fans for a little while (how many goals ahead are we going to have to go on Sunday until you would honestly relax?) More importantly, it’s likely to play on the player’s minds too and together, we will fashion a kind of cauldron of mutual anxiety.

As Anderlecht reduced the deficit to 3-1 on Tuesday night, Arsenal’s resistance took on the conviction of a gently flapping curtain, caught by the breeze of an open window. As the plucky visitors continued to double up on our overloaded full backs, it was difficult not to think that we had seen this all before. LD