With the football world celebrating ten years since Arsenal became “Invincible,” it was interesting how chatter quickly veered away from the amazing technical accuracy the team played with, to discussion about leaders. That’s because, having begun during the international break, with no comparable action of note, nostalgia was suddenly forced to merge with real life as new Arsenal were set to host Hull City.

Looking at it that way, it’s easy to jump to conclusions about how far away this Arsenal side is in terms of leadership. Looking back, certainly the Invincibles did comprise of some of the sport’s strongest and most demanding characters, while it is not so easy to see the same physical and mental toughness on this Arsenal side. Yet, as Daniel Taylor writes in his column for The Guardian, the downfall of Arsenal probably started in the next season when managers such as Sir Alex Ferguson and Sam Allardyce begun telling their teams to systematically hack The Gunners down whenever theyhad the ball. Football has changed, however, and power, which Arsenal were built on, doesn’t dominate as much. Tackles with excessive force are routinely called up, so much so that Allardyce says he trains players to intercept now – “because most tackles are fouls.”

Against Hull, in the 2-2 draw, Arsenal didn’t need a leader in as much as they needed a technical leader. Of course, the constant finger-jabbing and cajoling of the likes of Jack Wilshere and Mathieu Flamini pale in comparison to the drive and sheer omnipresence of Patrick Viera, Sol Campbell et al. and there are times when you need “big balls” as Jose Mourinho says, yet there were large moments in the game, particularly after half-time when Hull scored, when Arsenal just needed sanity to their play. In that middle period, passes frequently missed their target and moves broke down as Arsenal looked to force a tempo that wasn’t there. What they should have realised was that upping the tempo was a gradual thing, requiring subtle, sudden changing of gears. Instead, players would make runs that weren’t found in an attempt to transplant urgency to the play, and with each misplaced pass the fans groaned louder and anxiousness seeped into Arsenal’s play.

Thankfully it was Alexis Sanchez who finally grabbed the game by the scruff of the neck, though it took a while as he was also culpable of bouts of zealousness, when he took the ball past two players before slipping Danny Welbeck in for the equaliser. His opener was of similar class, but the goal followed an opening passage of play where Arsenal were thoroughly dominant, and which epitomised why Arsene Wenger is determined to use a 4-1-4-1 system this season.

After the game he said that the team has “progressed since last season in the way we dominate the games and the way we combine,” which may confuse some given Arsenal’s league position, but what people might be missing are the palpable steps Arsenal are taking to improve to their positional play. In that, Wenger is looking to emulate bits of the Germany/Pep Guardiola/Dutch 4-3-3 model where the attacking line in the 4-1-4-1 occupies the length of the pitch, thereby always creating angles and options to pass to. As Leighton Baines says, in an interview for The Guardian when talking about Everton’s philosophy which goes along the same branch, “the really top teams who have mastered this way (Dutch Total Football), are the ones that gets success.”

GIF: Just before Santi Cazorla’s shot forces a save, Arsenal’s players occupy the length of the pitch, with Chamberlain joining Welbeck when the full-back pushes forward and Santi breaking from deep. His role changed in the second-half, which affected Arsenal’s fluidity, playing closer to a number 10 role when he played deeper in the first-half.

On the other hand, emphasis on death by possession makes it tougher for Arsenal to defeat teams as often; defences are set thus making it more difficult to get through. It has made Arsenal more sterile in effect, one of the things Wenger has strived to avoid. However, he has probably come round to see it as a necessary evil because sterile domination is not really an aim for possession teams; rather, it’s a by-product of their voraciousness to have the ball. Keeping the ball better also has the added effect of protecting the team from the counter-attack, an increasingly important aspect when planning your team in the modern game and what Jose Mourinho calls the “fourth phase”: attacking, defending, counter-attacking, and then, countering the counter.

Indeed, it’s arguable that much of Arsenal’s success last season was down to, if not more, to increased pragmatism to their play – that is the ability to drop deep, keep opponents at arms length, and then hit them when they showed mental, physical tiredness – as much as the goals of Aaron Ramsey, the impact of Ozil. And that, to a degree, points to Arsenal’s troubles in finding “defensive efficiency” this season as Wenger calls it. Because, as highlighted by the first goal they conceded, the team still seems to be unsure of what it wants to do at various stages or yet, haven’t acquired the game intelligence to carry it out; whether to press high up or sit back.

GIF: Here, Jack Wilshere urges Santi Cazorla to press when nobody else is, eventually leaving Mohamed Diame free to pass to. Wilshere had the right of it to some extent, as Hull’s player had picked up the ball with his back to goal – which should have been the trigger to press – but where he was wrong was that the whole Arsenal team showed no indication to squeeze play prior, with Hull completing 3-4 passes in that area with relative comfort anyway.

Indeed, the frustrating thing with this goal and the second goal was that it happened in the only two real passages of play where Hull had play at the back, and that’s why Wenger says the teams lack “defensive efficiency.” Their ability on the ball helped guard themselves on the counter, but pushing up as a team and moving as a unit, is what they have yet to synchronise. At the start of the season, Aaron Ramsey led the press but with his injury, Wilshere has replaced him, though it seems currently, both players play with more emotion than organisation.

The defence for the 4-1-4-1 falls flat when you consider Arsenal’s highest scoring performances, 3-0 against Villa and 4-1 v Galatasaray, have come when Ozil has been switched to the middle. In those games, he made Arsenal fluid, much as he did last season, drifting into the channels and silently killing teams with his intelligent passing. Yet, the 4-2-3-1 shouldn’t be seen as some sort of panacea for a stuttering start to the season because it must be remembered, for substantial periods of last season playing with the system, Arsenal’s play was jerky and uncertain, and sometimes turgid. At the time, that was put down to Arsenal missing runners from midfield, Ramsey and Walcott, therefore it might be understandable Wenger look for ways to make his system less reliant on certain individuals. Certainly, Alexis is currently bailing the side out on his own, yet The Gunners have looked to add other ways of breaking down opponents, as they lead the league for most through-balls and dribble succeeded. 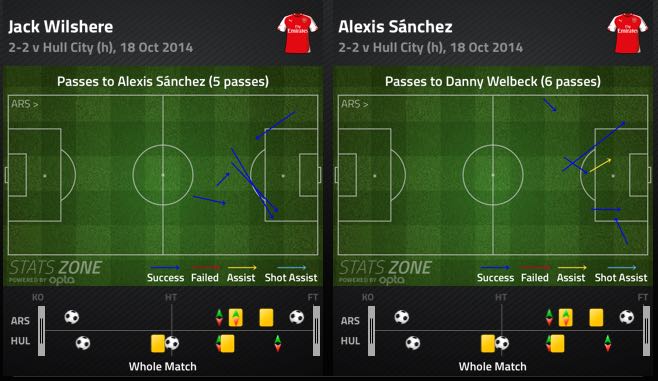 Partnerships are forming, though most notably revolving around Alexis, who was found by Wilshere a couple of times with diagonal passes while he himself, works well in tandem with Welbeck. Indeed, it seems Alexis can make a good no.10 if Wenger ever looks to switch-up his formation but perhaps for now, his best position is on the right where he can roam laterally or sprint behind. On the other side, he perhaps relies too much on cutting inside, thus clogging up play centrally. Indeed, Wenger’s reticence about playing him on the right before Hull might have been down to wanting fill his side with ball-players to maximise chance creation, but with Wilshere showing huge strides in his execution of the final ball, switching Alexis to the other was a no-brainer. His impact showed how big a player he has become for Arsenal.