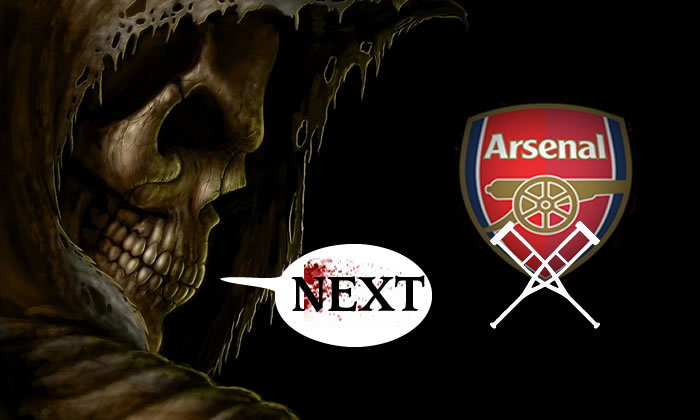 It seems somewhat apt that it’s miserable and teeming down this morning, as Arsenal’s fitness parade was rained on once more yesterday.

In the morning we got news that Mesut Ozil was heading to Munich to have an MRI. In the afternoon the German national association released a statement on Twitter saying:

BREAKING: @MesutOzil1088 out for 10-12 weeks with partial lateral collateral ligament tear in left knee. More to follow… Get well soon!

To be honest, I don’t know what upset me more, the injury or the exclamation mark at the end, but all the same it’s bad news. Arsenal responded with a statement of their own, looking to play down the seriousness of the injury, which said:

Ozil complained of a sore left knee after the game and the club advised the German FA to run medical checks when he joined up with his international squad. The club will make further assessments and it is too early to say how long Ozil may be out of action.

I mean, I get what they’re trying to do but surely the diagnosis he received in Germany is unlikely to be much different from the one he’ll get when he’s assessed by our medical people [insert obvious gag here about how when our staff get their hands him it’ll be 3 years rather than 3 months etc etc].

Regardless of how you view Ozil’s current/recent form, this is bad news. Despite the performance at Chelsea there had been encouraging signs against the likes of Villa and Galatasaray, and as we’re about to go on a run of games against teams of that level you’d have fancied him to make a significant contribution. That we’re well-stocked with options to replace him does soften the impact somewhat – it’s a much easier situation to cope with than a similar injury to Koscielny or Mertesacker (crosses fingers, does safety dance) – but it’s still a blow.

And, of course, it’s yet another injury. Aaron Ramsey is currently sidelined with a twanged hammy, Olivier Giroud is out until next year with a broken leg, Mathieu Debuchy’s ankle has just been turned back the right way around, and we still await the return of Theodore P Walcott who has been out since January with a cruciate knee ligament injury. Those come on top of the litany of 2-4 week knocks we pick up with monotonous and frustrating regularity.

Thankfully it wasn’t a question we were asked on Monday night, but the ‘Why do we get so many injuries?’ topic comes up time and again on the Arsecast Extra. It’s an unavoidable point of discussion because injuries happen so often. We ought to consider changing our crest from a cannon to a pair of crutches and an inflatable protective boot. It is, frankly, ridiculous at this point, but why does it keep happening?

There are all kinds of theories put forward, such as:

– The fitness regime and lack of proper prevention/rehabilitation

– Our style of football

– Having a collection of exceptionally brittle players

I’m sure if you looked around you’d find a few more out there, and for me this is the key issue. You can look at all of the things I’ve listed above and they all sound plausible enough to one extent or another, and to my mind that’s the most likely scenario. There’s a little from column A, a bit from column B, a smattering from column C and so on.

We know the club have launched more than one internal investigation into what is now a systemic problem, but as yet they haven’t been able to find the root cause. They’ve brought in Shad Forsythe who must now feel like the captain on the Titanic to some extent, but to expect overnight change is not realistic at all. I don’t think anyone expected things to get worse though (this is not a suggestion that Shad is at fault, but this season’s injury list is absurd by any standards).

I think the main problem is that regardless of how many investigations we carry out, we’re not going to uncover a smoking gun which provides a handy one-stop solution to the problem. “Oh, it turns out that the grass is just 2mm too high and if we cut that and remove all the players wisdom teeth we’ll be fine.”

That’s not going to happen. It’s a multi-faceted issue which is going to have to solved in a number of ways. All we know is that we have a lot of injuries, from there we’ve got to work out why and if we can identify areas that need to be improved then we’ve got to do that and do it with extreme ruthlessness. If that means changes in methods, personnel, equipment, or anything else, then that’s what we’ve got to do, because it doesn’t matter how big a squad you have, when you have the amount of injuries we do then it affects results and, ultimately, your competitiveness.

I don’t claim to know the answer but then I’m not in charge of a very wealthy organisation with the resources to look into it in much more detail than any of us could. We might have some raw data based on who has been out for how long and with what injury, but you can be sure that behind the scenes there’s a glut of information that could be analysed in great depth to try and figure out what the hell is going on.

Football these days is competitive enough without being at a disadvantage constantly because of the number of players, important players at that, who are missing through injury. The margins are so fine. Would last season’s title challenge have faltered so badly if we’d had Ramsey and Walcott fit for the duration? Maybe, but then again, maybe not and when you miss out by just 7 points in the end it’s hard not to wonder about things like that.

As I said, I don’t have the solution, but somebody must be able to figure this out. Until we do, however, we’re going to find our ability to challenge for the top honours quite literally crippled.