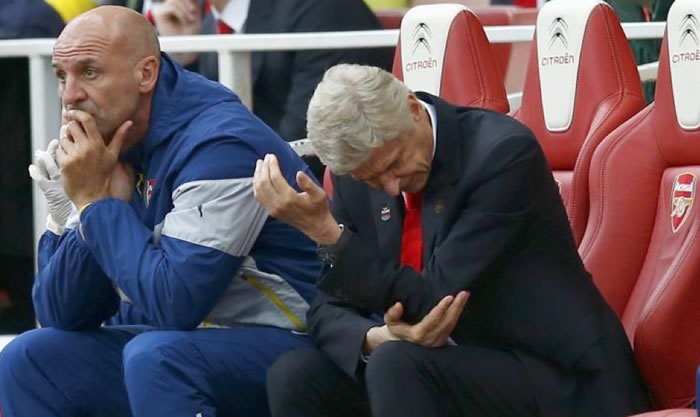 Well, so much for this being the start of a run of games that might see the team find some form and rhythm. Although we began well, we soon self-destructed in typical Arsenal style and in the end we were lucky to salvage a point with a late Danny Welbeck goal.

It had started very positively though. In the first 15 minutes we were lively, creative and dangerous. We had seven shots in that period, including the fizzing opener from Alexis, and the goal itself made you feel like ‘Ok, now we’re on top, we’ll kick on from here’.

Instead, they got a somewhat contentious equaliser. Diame, who had been down injured, got the ball in midfield and headed towards goal. With players around him he obviously pulled back Flamini who had got ahead of him and then got a bit of a lucky rebound which took him towards goal. His finish was excellent as Szczesny came out, but while I understand the suggestions that we could or should have defended better, on this particular issue you can’t ignore the blatant nature of the foul.

If we had a player going through on goal who was fouled and the referee ignored it, you wouldn’t be saying he should have been stronger. You’d be furious that the foul wasn’t awarded and I think we have every right to be aggrieved about the decision from a referee who was poor all day. That’s not to suggest the result was down to him, he was almost as bad as we were, but it was a frustration to see such an obvious foul not given – especially considering the outcome.

Now, you might argue that a bigger, stronger player wouldn’t have been quite so easy to reef out of the way, but that’s a different thing altogether. What was most bewildering about their goal was how it impacted us. There was no response which suggested we were channeling that outrage into determination. Instead, it took the wind out of our sails and although we had plenty of the ball, we really didn’t do a lot with it. The only shot on target before half-time came from Santi Cazorla and it wasn’t one that troubled the keeper.

So, half-time came and you expect the team to come out reinvigorated and ready to take the game to Hull. What we got was a goal for the visitors after just 31 seconds. Much of the blame will be Per Mertesacker’s, caught on his heels a bit which allowed Hernandez to plant home the header, but in the overall context of the goal, we have to ask why it was so easy for them to make the cross in the first place.

Jack Wilshere allowed the less than speedy Tom Huddlestone to saunter past him, and made no real effort to try and block the cross. Per’s defending wasn’t good, but as a team we just weren’t switched on. Arsene Wenger said afterwards:

We came out of the dressing room with a lack of focus and gave them the lead straight away.

Some might say that’s down to the players themselves, but for me it’s an integral part of the manager’s job to ensure that his team are fully focused – especially when he’s just had fifteen minutes in the dressing room with them. If they’re not at full concentration from the kick-off then that’s down to Arsene Wenger and nobody else. That is, literally, his job. We were caught napping and it has cost us points.

Nevertheless, conceding after 31 seconds of the half, while not ideal, gives you plenty of time to respond. We’re at home, playing against a resolute team but one that we dominated in the opening stages of the game. There was time to react, so what made yesterday’s game so very worrying was that we just didn’t, or weren’t capable of it. Lots of the ball, sure, but no penetration or moments of danger.

Hull had lost their keeper before half-time, 40 year old Steve Harper, so were playing their third choice for the entirety of the second period. That he didn’t have a save to make until the 86th minute, tipping over an Alexis header, speaks volumes. We brought on Joel Campbell and Aaron Ramsey to spark us into life, but neither player could make much of an impact. Indeed, such was the way we were playing that Campbell’s most notable contribution was solid defensive work, chasing back to make a good tackle when Hull looked to catch us on the break (an area where teams of better quality would have had some real joy).

Thankfully, we salvaged a point late on when Alexis – the one truly bright spot on a dark day – ran, twisted, turned and fed Danny Welbeck in the area, and the striker’s finish was smart enough to rescue a draw. It might even have been better right at the death when Gibbs surged forward to try and get on the end of an Alexis cross to the back post but couldn’t quite manage to connect cleanly enough, allowing the keeper to save. As welcome as that goal would have been, it still wouldn’t have been enough to gloss over what was a dismal display overall.

You sit there wondering why, if we could ratchet up in the intensity in the last five minutes of injury time, why couldn’t we do that immediately after Hull scored their second? Or better yet, before allowing them a soft goal in the first place? I know there’s a natural momentum in a game and the last few minutes by their very nature are always likely to be a bit more frantic, but watching us plod through that second half felt like we were going through the motions and not much more.

We’ve played eight Premier League games this season and won just two. Our sequence of results is WDDDWDLD. Too many draws, too many dropped points against opposition that we should be beating, and with all due respect to a Hull side who worked hard, those were dropped points yesterday. Forget their time-wasting, that’s part and parcel of the game and it’s up to us not to be in a position where they can take advantage of that.

For all the referee’s crapness yesterday, he still played 6 minutes at the end and it was in that time we found the equaliser and almost got a winner. If their behaviour impacted our rhythm or momentum – making the huge assumption that we had any – then we need to learn how to deal with it better. For me, however, the blame lies squarely on our own shoulders and ultimately with the manager who is not getting anywhere near as much as he should out of the players.

If you want to use the fact we had a right-back making his first Premier League start (who did pretty well I thought) and a left-back at centre-half as some kind of mitigation, fine. The bigger question is why we’re in that position in the first place. Johnny Blind could have looked at our squad as the transfer deadline closed and told you we were light at the back, and being unable to field a consistent back four is affecting the way the team plays.

It is the platform on which the rest of your team is built, and right now ours is rickety, riddled with woodworm and held together with bits of twine and some old tape. I think we’ve got good players but we’re three months into the season and you can count on one hand (maybe one finger), the amount of times we’ve clicked as a team. That’s just not good enough.

We spent big this summer and the consequence of that appears to be that we’re going backwards. Injuries, sure, of course they’re damaging but are we doing enough to ensure that our players are fit and ready? How is that Aaron Ramsey, declared out for weeks and weeks, is suddenly back in the squad? Did he go to Lourdes and undergo a miracle, perhaps? Or maybe there’s something more obvious.

Football is funny, it might not take much to spark us into life and change the mood and perception of the team, but right now it appears we’re going too far the other way not to be seriously worried. If we can’t get focused enough to beat Hull at home, you’ve got to ask serious questions of the manager.

And right now he doesn’t look like a man who has the answers.