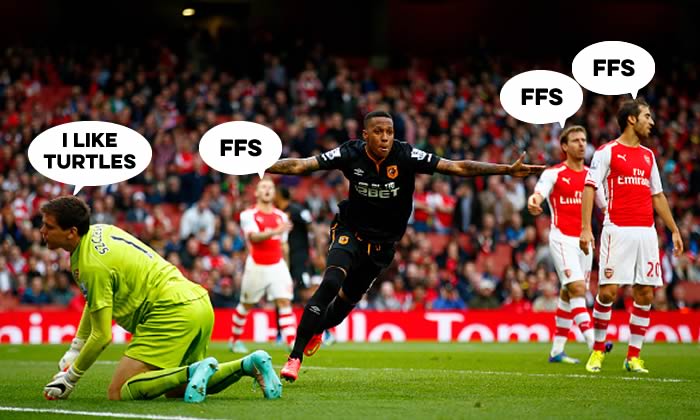 A famous man once said, “If you defend like a garrulous, gin-soaked wombat, you’ll never win the Premier League.”

Actually, I don’t know if a famous man said that at all, but somebody should have because it’s true. We are a gimlet-eyed marsupial at the moment, conceding more goals, looking susceptible to the counter attack, and I think we’ve got to be thankful that Hull didn’t have the players who could genuinely hurt us when things broke down at the attacking end of the pitch.

On today’s Arsecast Extra (coming later), the subject of where our biggest issue is came up. Is it the fact we’re not scoring enough or that we let in too many? For me it’s the latter. Our defensive platform is not right and until we get that sorted out then we’re going to continue to drop points. That we’re not losing too many games is, perhaps, a small blessing but our defending is obviously the biggest problem we have right now.

Stepping back and looking at it as objectively as possible, the main reason is that we’ve had to chop and change personnel for various reasons. Injury and suspension have played a part, but in thirteen games across all competitions we’ve had eight different back four combinations (not including the goalkeeper).

Compare that to last season when we played Sanga – Mertesacker – Koscielny – Gibbs for the majority of our games. Having to chop and change at the back doesn’t excuse our defensive frailty, but it’s part of why we’re so all over the place back there this time around. Regardless of how well you’re drilled and how much you do on the training ground, having to play a left-back at centre-half and a rookie right back will make it more difficult for your back four to perform as a unit.

With injury we’ve been unlucky in one instance: Mathieu Debuchy. His ligament injury was dreadfully unfortunate but the fact we’ve had to use our only central defensive back-up to replace him is down to the fact we were always light at the back. People ask why didn’t we keep Vermaelen? The reality is that even if we had he’d be another frustration as he’s yet to play this season because of injury.

The Koscielny situation can’t be anything other than a piece of mismanagement though. You don’t develop ‘chronic tendinitis is both Achilles tendons’ overnight. Even if, and this is a stretch, the club only became aware of the seriousness of Koscielny’s problem when he returned from World Cup duty, they still had a month to source a defender in the transfer market. Quite why they didn’t is beyond me, but this is old ground we’re treading here. The fact remains we failed to give our squad the adequate depth in a key area and now we’re paying the price.

Arsene Wenger talks about the need for more balance, saying:

Last year we had 17 clean sheets with the same defenders but we have not started to do that yet. Our defensive efficiency is not there and we cannot survive at the top level by always conceding two goals.

Except it’s not the same defenders. Debuchy for Sagna was a decent replacement, and we’ve been hit badly by his injury, but when you’re playing a 19 year Chambers, 19 year old Bellerin, Monreal as a central-defender you can’t say the situation is the same in terms of the players.

Nor is it the same in the way that the team has set up. Has the formation tweak played a part in our lack of defensive stability? Even if we did look better going forward against Hull (in the opening 20 minutes), by the time the second half came around we looked uncomfortable and it required awareness and defensive dedication from some our forwards to stop Hull’s counter-attacks. Yet in the two games in which we’ve performed best (Villa away and Galatasaray home), we were set up in the same way we did last season.

Villa, by the way, was a clean sheet and Galatasaray should have been but for Szczesny’s penalty concession. And, as well as being effective from an attacking point of view, we looked more sound at the back in both of those games. Coincidence? Perhaps. Two games is not really a large enough sample size, but maybe looking distinctly troubled in all the other games probably provides enough balance.

The other thing that has bothered me somewhat this season is the idea that defending is the sole preserve of the back four, and not the concerted team effort it was. Yes, we’ve had some help from forwards like Alexis and Welbeck for whom hard work is viewed as part of the job and not something that might happen if it occurs to them in time. But if you remember when we went to Bayern and got a 2-0 win which filled a previously jittery team with the defensive confidence to see out a season with 1-0 and one goal wins to secure a Champions League spot at the expense of Sp*rs – that was built on a huge team effort.

Midfielders didn’t look at fat blokes running past them, they chased them down and threw themselves into tackles that might prevent a dangerous cross which might result in a goal. There doesn’t seem to be the same level of effort right now and due to the injury problems we’ve got, and the inability to field a consistent back four, we need to put that right straight away.

Look at Wednesday night’s potential back four. David Ospina is out of the game through injury and Wojciech Szczesny is suspended. That means a start in goal for Emiliano Martinez. Calum Chambers should come back into the centre of defence so that means we’ve got a defensive set up of: Martinez – Bellerin – Mertesacker – Chambers – Gibbs (the bolded players have a total of 19 appearances for the club between them).

So, what do we do? Do we trust in their potential and ability? Or do we make sure that the we play makes it as easy as possible for them to perform well? Add another deeper-lying midfielder to ensure that the team is better able to cope with opposition attacks and counters? Play the formation that they feel most comfortable in? All possible, but more than anything else we have to drill into them the idea that everybody has defensive responsibility, and everybody is expected to do their bit.

We’re in a precarious situation because so much of football is about confidence and belief, and right now we look like team that doesn’t believe it can keep clean sheets. It becomes almost self-defeating in a way. But, we’ve had these troubles before and found a solution – and it’s vital we do that now. It’s more difficult when you have to chop and change and you’re using more inexperienced players, but that’s life. That’s the position we’ve put ourselves in and until we find a way of dealing with it, results will continue to disappoint.

As I mentioned, James and I will have an Arsecast Extra for you later on – it should be up and ready around lunchtime. In the meantime, any pre-Anderlecht news etc, can be found over on Arseblog News.