Greetings from Gentleman Towers on this All Hallow’s Eve. The downstairs staff are in a state of high dudgeon at this time of year, for they are allowed to fossick around in the East Wing attic for our Hallowee’en decorations to dress the halls in preparation for the visit of gangs of cheeky scamps this evening, all dressed up as fiends and ghouls. What larks! Any infant a-knocking on the door will certainly get a toothsome treat. This year it is homemade eclairs, albeit with one in every ten laced with botulism toxin. It keeps them on their toes and introduces a welcome element of danger to proceedings.

Indeed, when one is a touch sizzled, one is tempted to ask the butler to dare the little urchins into ‘tricking’ us. A short-lived trick, however, as I am waiting for them to back down the gravel driveway into a powerful spotlight, all the better to pepper their behinds with some half inch shotgun pellets, or indeed a couple of rounds of .35 high-powered shells, or the odd hand grenade. Character building!

The Hallowe’en decorations themselves are utterly terrifying; a primitive fetish in the shape of Chamakh’s hair made from glue and coal dust, a ghostly portrait of Rio Ferdinand, a life size doll of Erik Lamela dressed as a vampire, that is, dressed as Erik Lamela, a voodoo doll of Wayne Rooney with an interchangeable pumpkin head and a terrifying Ryan Shawcross Frankenstein toy with a string to its back that on the first pull shouts “I BREAK HIS LEG” and on the second “I AM VICTIM. I WANT MUMMY.” Very authentic.

We digress. We turn first to events in the North East, a province that is only begrudgingly English. I am party to certain government ministers’ secret documents and I have seen evidence that we have tried to sell the Tyne-Tees region to Scotchland on at least five occasions since the turn of the past century. The price has fallen on every successive occasion, and 2008’s tariff was “Four cans of McEwan’s, a half bottle of a decent Speyside and a dozen haggi.” Although the correct plural of haggis was used in the tender document, the Scots declined. “What do we want with 300 derelict factories, a population so obese they all look like the progeny of Frank Lampard and soil so contaminated you can hear it hum at night? We’ve already got Glasgow.” And so Sunderland remains, for the moment at least, English.

And so the line-up for Woolwich at the weekend was thus: 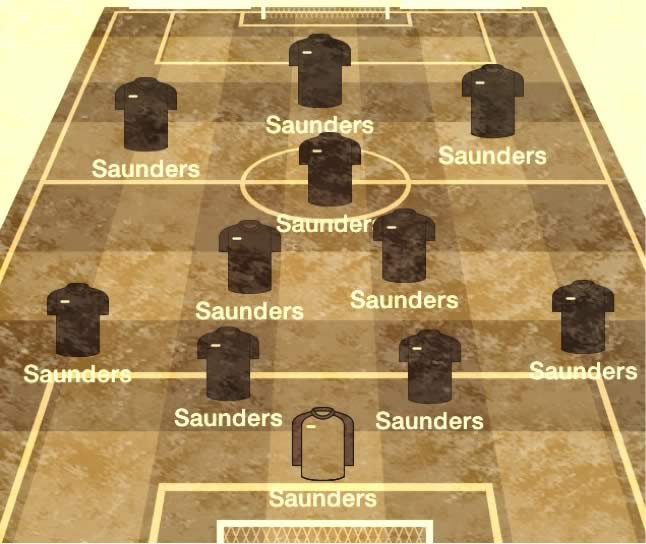 Mr. Brown was left patting his pockets, baffled, wondering where he last saw his erotica, oh god no, did I leave it on the nightstand, my wife must have seen it and also I’m a bit peckish, where are my emergency pork scratchings? What time is it? And then he heard the lusty roar of the travelling faithful, mostly made up of Whizzbang Saunders, to signify one nil to Woolwich. The second was an example of compete and total persistence resulting in a glove butler capitulating like an Italian soldier at first sight of an allied tank turret. Mr. Saunders is the supreme irritant, powered by kerosene, he is a pot of mobile poison to the enemy, a frightful nuisance and the toast of Bloomsbury.

Mr. Saunders is something of a fig leaf for the collective clanking and sputtering of the rest of the side. A side, it must be noted, ravaged by injury and the treatment of injury. So far the players have managed to keep Saunders away from the clutches of the Arsenal Medical Team, by use of laundry baskets, cunning disguises and flat-bottomed trunks, but at some point he will be discovered and ‘treated’.

And then what will become of us?