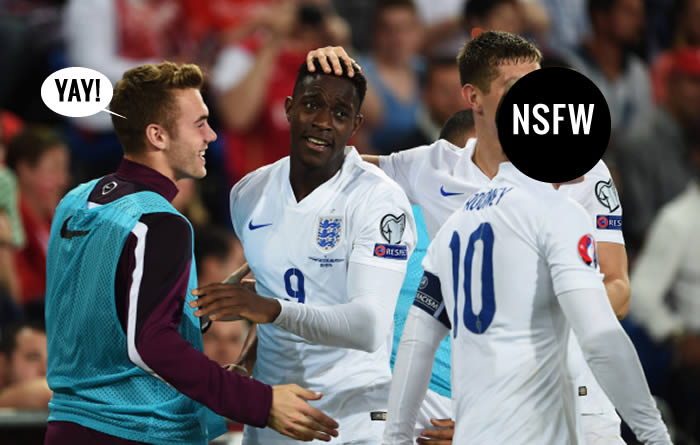 It turned out to be a good night for England and Roy Hodgson, and a great one for Danny Welbeck whose two goals ensured a 2-0 win over Switzerland in Basel. Beforehand it felt as if things were going to take their usual turn in the English press, with the knives out for the manager, but instead the new Arsenal boy made the difference.

He got his first around the hour mark, shinning home from close range (they all count though), after which he ran to the sideline to jump into the arms of his new teammates Calum Chambers and Alex Oxlade-Chamberlain. He then made the game safe in the 90th minute, opening up his body to side-foot home after being put through by Ricky Lambert.

I didn’t see much of it, I have to admit. There was a moment in the first half when he might have created a goal but Raheem Sterling checked his run and the chance was squandered, but scoring two goals in the week before his first Arsenal game won’t do his confidence any harm at all. That the opposition is a team he’s grown up ready to give everything against makes it an even more enticing prospect.

I also think that despite he’ll only have had a couple of days training with the team, he’s got to start the game against Man City. With doubts over Ozil’s fitness, Alexis could play from the right and Welbeck down the middle seems the most blindingly obvious choice (despite Sanogo’s third goal in two games for the France U21s last night). A baptism of fire, perhaps, but he’s no ingenue, and he’ll go into this one pumped up, I’m sure.

For more on the new boy, check out this piece on Arseblog News kindly written for us by United fan @BeardedGenius. A taster for you:

All the raw ability is there. He has everything that is required to bloom into a formidable striker. He’s sharp of mind and technically gifted. He will love having quick-witted forwards around him and relish Arsenal’s one-touch passing.

He is a formidable athlete with a rude change of pace for a six footer. Broad shoulders and an imposing frame have only filled out properly in recent years and he now holds himself strong and tall, whereas previously he could cut a languid, apologetic figure. He was too nice. He’s learnt how to bully and gained some welcome arrogance.

More and more it feels like a canny signing, even if it was one that came very, very late in the day. For more on that, and to hear how it all really went down, have a listen to this week’s Arsecast Extra in which James has the full story about how and when contact was made.

I suspect that there might have been other things going, but above all else the manager will have looked at how toothless his team appeared against Leicester and realised that with his top scorer banjaxed until the new year, something had to be done about it. Obviously we’ll have to wait and see how it all pans out, but I suspect the urchins outside the ground on deadline day who cheered when Sky played down the chance of Welbeck arriving are feeling a bit foolish now.

Meanwhile, Lukas Podolski reckons that Welbeck’s status as a new arrival – and the third most expensive signing in our history – will be an advantage to him (at least in the very short term). He says:

Initially, it’s a difficult situation for me. When you buy new players for a lot of money they have an advantage because they will play. We’ve got a long season ahead of us, and we’ll see what happens.

Which is true, everybody loves to play with the shiny new thing, but I don’t see Welbeck and Podolski as competitors for the same position. Arsene Wenger, as we know, is hugely reluctant to use Podolski anywhere other than the left hand side, and if Welbeck isn’t primarily deployed as a central striker I will eat my hat*. So, there’s no real crossover there.

However, as you’d expect from the German, he’s still massively positive about us and what he can bring to the team, saying:

I had a chat with Arsene Wenger, during which he told me that he is banking on my firepower and assists, and wants to keep me. That’s why the issue of a transfer was rather secondary to me. I feel great in London and at Arsenal, and it continues to stay like that.

When everyone’s fit it’s impossible to see Podolski as a starter, but to be competitive in as many competitions as we’re in, you need squad depth. His game might be limited, but there’s no doubt he’s got end product. He’s capable of goals and assists and is a proven quantity in that regard. Some of the other options we have are less convincing at this moment in time, so I’m glad he’s still around.

It also sounds as if he’s aware he’s got to really work hard to convince the manager that he should play, and that’s probably a healthy situation for him. What odds on his assist for Welbeck’s winner on Saturday against City?

Other than that not a lot going on. The last of our players away on international duty is, as far as I can make out, Aaron Ramsey who’ll play for Wales against Andorra tonight. Fingers crossed for a healthy return for him, then we can start to get back to real football again.

* usual caveat about my hat being made from meat-based pie applies.

Edu’s own summer (shove it)