Welcome, then, to the New Arsenal. Which, on the face of it, looks not much different to the Old Arsenal, except with a few shiny new stickers on it. Arsenal’s encounter with Manchester City on Saturday was supposed to herald a new kind of Arsenal, one that could compete with the big boys and still play football like it wants to, but also show signs of overcoming the inexplicable weaknesses that it has – such as its fear of the early afternoon kick-off. And sure enough, the team started brightly – exhilarating even – playing an intoxicating and dizzying brand of football that made you think that this should have been the natural evolution of the Invincibles side and not the faux tiki-taka we got afterwards (though that was gripping in a tortuous sense).

The attack was aggressive, Arsenal snapping and snarling at the City players like a blur of red, led at the vanguard by Jack Wilshere and Alexis Sanchez, and then breaking with speed. For the first-half of the first-half, Arsenal were in total domination – until Welbeck missed. His chipped chance, fashioned because Arsenal’s pressure forced David Silva to play an errant back-pass, hit the post. It should have been the dream start to his debut, capping off a committed and fiery opening period for Arsenal. Instead The Gunners’ mood deflated and City wrestled control of the match.

This was one of the ugly traits of Old Arsenal; wilting at the point in the match where a bit of ruthlessness was needed, such as against Bayern Munich at home last season. It wasn’t just that they let Man City come onto them, standing off whenever they attacked, but in their desperation they kept giving the ball away. When City scored, it came after Alexis tried to dribble his way through a crowd of players and athough Navas got a bit of luck when the ball fell for him on the right-hand side, Aguero’s minimal effort to finish was a contrast to Welbeck’s elaborateness.

Arsene Wenger’s reaction in these moments has always been to keep playing, to keep trying to find angles to play their “zippy” passes. Mesut Ozil was switched to the right-flank in order to get him on the ball and to try to regain some control of the match. However, the tactical reshuffle, prompted after Welbeck had missed, may have inadvertently led to City’s opening goal. That’s because Ozil, starting on the left, acts as a bit of a balancer between the two sides, allowing Alexis to stay up the pitch and make runs in behind while he helps circulate possession. His deeper starting position also meant that Nacho Monreal, Arsenal’s weak-link, wasn’t so exposed going forward. All these factors came together when Arsenal conceded the goal: the play became a little narrow, as shown when Alexis tried to dribble his way through the centre and was tackled and then Monreal was caught up the pitch, making a run he didn’t was required to make in the early stages.

Thankfully, Arsenal returned to their high-tempo, tigerish ways after the break and when Alexis scored the goal to take the score to 2-1, it even vindicated the tactical switch to move him to the left somewhat. The two goals Arsenal scored were excellent, coming from the type of move that when Arsenal perfect, is usually too slick, too evasive for opponents to handle. Yet, as highlighted by the Wilshere goal there is an extra ingredient in this Arsenal side that makes them so exciting and what I believe might be the crucial factor – players who can defeat a man 1 v 1.

Because the way Arsenal play, provoking teams to defend deep and compact, sometimes even space to run behind will be at a premium. These players, when they turn on the ball and suddenly they’re facing the goal, is what can make Arsenal dynamic. When they can eliminate a man and then suddenly the space opens up it becomes extremely difficult to defend as Gael Clichy found out when Wilshere sidestepped past him. Throw in Alexis, Ozil, Ramsey, Oxlade-Chamberlain, Welbeck and even Sanogo into the mix, who is robust in the challenges, and you get what might be the most intrepid Arsenal squad this side of the Invincibles.

It was interesting after the game that Wenger described this Arsenal as an “offensive team.” In any other year, it would be shrugged off as normal but last season, Wenger avoided such adjectives, instead focusing on praising the team’s spirit or mental resolve. It’s clear then that side was a work in progress, as this team is, though it is getting far closer to the ideal that he wants his team to be. However last season, Arsenal added a pragmatism to their game, the ability to “win ugly” and though it was often reserved for games outside the top four, the inexplicable nervousness that kicked in once Arsenal took the lead and then conceded will have been a bit of a worry. Jack Wilshere says Arsenal are trying to win the ball back quicker this season and certainly, it will be up to Wenger to find a balance between the passiveness that served them well last season, and the high-pressing deployed in parts against City.

Here, the 4-1-4-1 shape probably grants Wilshere and Ramsey too much liberty going forward and as a result, probably forego some of their defensive duties. Of course, that’s partly the point in switching to the new system as it gives the midfield more margin for error in transitions, but at the same time, Arsenal, by rarely having Wilshere and Ramsey defending on the same line means that they neglect one of the benefits of the 4-1-4-1 which is, as Zdenek Zeman, the former Roma coach says, “the most rational formation to cover the spaces”.

It’s probably one of the weaknesses of Arsene Wenger who, it is argued by Matthew Whitehouse, is mainly a “facilitator of players’ development” and not very keen on developing positional play. Indeed Whitehouse, author of “The Way Forward: Solutions to England’s Football Failings”, argues that “Ozil is struggling to impact games because the Arsenal team is not set-up tactically well enough to bring out best in him.” This is a big statement, one that is rooted in truths though I’m not so against using Ozil wide because he always knows the right thing to do wherever he plays. However, I do believe he is Arsenal’s best player and you lose his ability to control the play when shunted out to the flanks. In that case, he becomes more of a balancer rather than a conductor. Still an important player, but one the team relies on less now.

One final interesting tactical observation on the 4-1-4-1 is the use of Wilshere and Ramsey as interiors. In the past, one of these players might typically be a defensive player: indeed last season, Wenger used Flamini in such a role. However, it seems now the trend is, with more teams willing to use a diamond formation or play three midfielders behind a narrow front three, is to use attacking players to the side of the midfield. That’s because teams want to get quickly from defence to attack – perhaps in the last decade, it has been the other way round. Playing dynamic, aggressive yet most crucially, skilful players help achieve that and Wenger’s comments on Wilshere after the game seems to confirm that: “Wilshere’s coming back physically to his level where he can be,” said the manager. “It takes time to find that fraction of a second where you feel you can make a difference and it’s so important in the modern game – to get away from people when you win the ball.”

Wilshere, with a spring to his step, is such a crucial player for Arsenal. 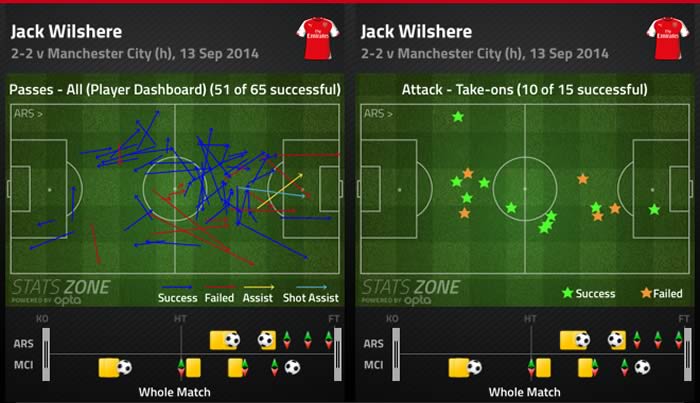