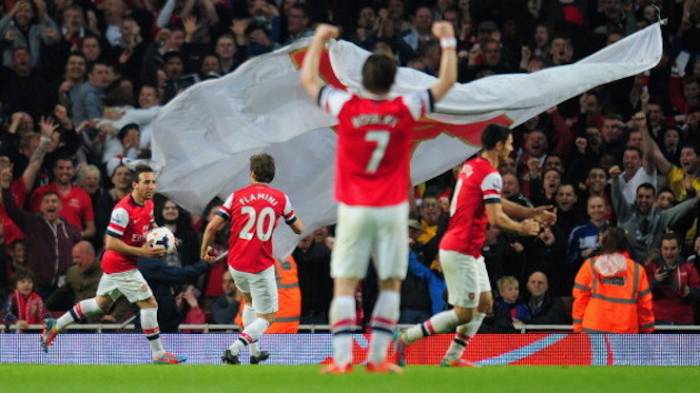 Morning all, and it’s a busy one as we get set to face Man City.

It seems like it’s been an age since our last game. Between the Interlull, worrying about injuries, and everything else that’s gone on, the wait for this has been almost interminable, but here we are and there aren’t many bigger tests than this to get ourselves going again.

The 12.45 kick off has got some people worried, but it was an away from home issue last season and it’s something the manager was keen to downplay, saying:

Sometimes, when your opponent is better than you, you lose. It wouldn’t matter if we played at nine o’clock at night or 12.45pm. They were better than us. Let’s not make a psychological problem of it.

The biggest ‘problem’ the manager faces today is how to get his team to click. It’s fair to say that it hasn’t happened yet this season. In fact, the closest we came was against Man City in the Community Shield but since then it’s been a bit of a struggle. The balance between the team’s attacking talents hasn’t been found and that’s something he’s got to do.

In terms of the team today, Mikel Arteta is back and I think he’ll come back into the midfield for Flamini, while we’ll have to wait and see what the situation with Aaron Ramsey is after his ankle assessment. Jack Wilshere would be the obvious candidate if he’s not quite ready, but it’s what happens ahead of that which will be most interesting.

I don’t think there’s any doubt that Danny Welbeck will start as the centre-forward. Even with the manager’s foibles, you just don’t make the third most expensive signing in your history and then play Yaya Sanogo. Arsene Wenger spoke about him again, saying:

I see him more through the middle than on the flanks but what is very good for us is he can play in all three positions – and sometimes behind the striker if needed – so he’s very versatile as well. When you have his size, his pace and his running capacity you would say through the middle.

He also made the point that it’s not a position where you have to have fully formed connections with the players around you. It might be more difficult to throw a new midfielder into the mix, but not so much a forward and that’s why I think he’ll get the nod today. He’s our best option there now, and should play.

Behind him we’ve got Mesut Ozil, Alexis and Santi Cazorla and how he starts them is probably what’s giving him pause for thought. You have to think Alexis will be on the right to begin with but then is it Ozil or Cazorla who is going to be asked to start on the left hand side? Ozil has expressed his preference for playing centrally, and with City likely to attack down that side with the rampaging Zabaleta, his defensive shortcomings might well be exposed.

Cazorla, meanwhile, has played pretty well in the middle, so it’s not an easy one. I think the experiment against Leicester, where all three players behind the main striker, were allowed to move freely between flanks and centrally, didn’t really work. Maybe it’s something they’ve been working on in training this week but I’m not sure today is the right opponent to try it again.

It might be more effective with a more effective striker and Welbeck certainly gives us more pace, movement and experience than Sanogo, but we’ll just have to see. It strikes me that if we can figure out how to make our forward line click, then we’re going to be very dangerous this season. Today would be a very nice day for that to happen.

As for the new boy, I think he’s going to be super-fired up for this one. The comments from van Gaal will have stung a bit, I’m sure, and the fact that he’s playing his first game for his new club against the team he grew up hating as a United fan/player will mean he’s going to put in a serious shift this afternoon.

At the other end I think David Silva will be the man to watch out for. He’s just so clever on the ball and the fact that others catch the eye sometimes allows him to come alive and hurt you, as he did last season at our place. The back four will have their work cut out for them today.

However, I watched City against Stoke a couple of weeks ago and there was nothing particularly frightening about them. Bar the game two seasons ago when Koscielny ludicrously got himself sent off in less than 10 minutes we have a good record against them at our place, and if they do have a weakness it’s at the back, so let’s hope our newly coherent forward line can make the difference.

If you can’t see the game for some reason, remember that we’ll have full live blog coverage for you. Tom will be here to take you through the game from start to finish. Simply bookmark our default live blog page or check back here later on for a new post with all the details.

And if you fancy a flutter, Paddy Power are offering new accounts a special of Arsenal win with over 2.5 goals in the game at price of 9/1. Register here if that tickles your fancy.

Right, that’s about that. See some of you in the usual place for a pre/post game beer (or two, or possibly three), and fingers crossed we can get the right result today.