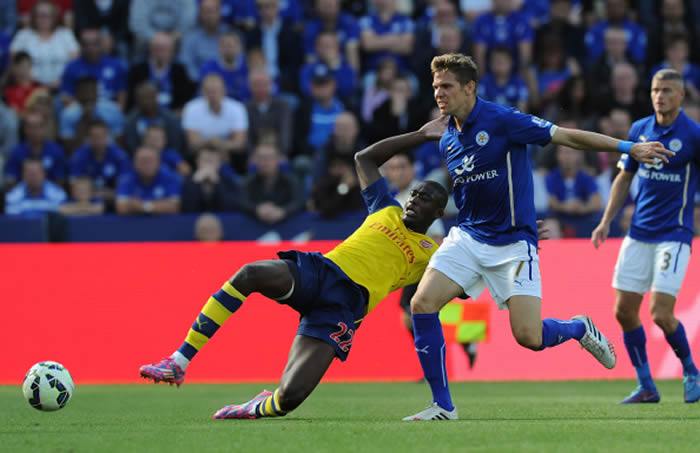 Sometimes it’s very difficult to figure out Arsene Wenger. While I fully accept he knows his players better than I do and has more information which has an impact on his team selection, I thought yesterday’s line-up was a bit odd.

Having spoken about how Alexis can play as a central striker ‘for his whole life’, he selected Yaya Sanogo instead, choosing to deploy the Chilean in a kind of fluid trio behind the young Frenchman. In the first half he, Santi Cazorla and Mesut Ozil switched positions with regularity; each one of them spending time left, right and in the middle.

If it was meant to confuse the opposition, it did much the same to us, and our game suffered because of it. In the second period we ended up with Ozil drifting on the right hand side, Alexis struggling on the left and Cazorla in the middle. When two of those three players aren’t in their best position, you can understand why it didn’t work.

The sight of Ozil feeding balls into Cazorla, playing with his back to goal on the edge of the box, is as good an illustration of why that particular system doesn’t work. It was meat and drink to the Leicester defenders who really just had to stay organised to snuff us out from an attacking point of view.

Behind them we had Aaron Ramsey who had a game reminiscent of the kind that had people frothing at the mouth not so long ago. If he were a golfer he was shanking the ball into the trees all day, while up front Yaya found it tough going again.

Having learned my lesson in the past I’m not writing off Sanogo completely. Once bitten, and all that. Arsene Wenger clearly sees something in him and he’s usually a pretty good judge, but right now he’s about the only one who can see that something.

The young lad is so desperate to score it’s like a millstone around his neck every time he plays. He had a couple of presentable chances yesterday, so even with poor enough service from behind him, he could have made a crucial impact, but couldn’t. The keeper saved one, he headed one over the bar, he tried to shoot whenever there was half a chance, but once again he finished without a goal to his name.

It is just 17 appearances, many of them bit-part cameos, but even Arsene Wenger admitted afterwards that it was a ‘problem’ for the player (not to mention the team). I love to see a young player come through a make it at Arsenal, I think most of us do, but I also find it hard to watch when a young player is clearly not ready for this level of football and I think that’s where we are with Sanogo. Also, this was, with all due respect, Leicester, and he’s going to come up against much better defenders throughout the season.

We spoke about how an injury to Giroud would leave us light up front and so it proved. That’s not to say a more mature, developed striker would have made the difference yesterday, but it certainly wouldn’t have hurt. People will ask why Joel Campbell and Lukas Podolski weren’t considered and my feeling on that is that the manager doesn’t have a great deal of faith in either of them. The latter was about to be sold last week and the former, well if he can’t get picked over Sanogo perhaps that tells its own story.

If there’s criticism of the Sanogo issue (and there is, let’s face it), it ought to be at the decision to select him rather than aimed at the player himself. It’s not his fault he’s out of his depth and he certainly doesn’t pick himself. All it took as an innocuous clearance to damage our main striker (one that many people wanted an improvement on anyway), to leave us in a position where a youngster is being thrust into action.

That’s down to the manager. You can’t convince people you have ‘so many strikers it’s unbelievable’, then play Sanogo and essentially ignore two internationals who have countless goals between them. And look, if the manager doesn’t believe in Podolski as a central striker, that’s fine. It’s a point of view I agree with. And if he’s unsure about whether Joel Campbell can do the job, then that’s grand too. He sees him in training every day and knows his qualities better than I do. But please, don’t talk them up as viable options when that’s not the case.

To be fair to Sanogo, his mishit shot/cross set up the goal for Alexis and we really should have kicked on from there. However, the injury to Laurent Koscielny cost us the equaliser. Having been flat on his back and in serious pain it seemed obvious that a change needed to be made, instead he was allowed off the pitch to put some tight underpants on his head and when Leicester crossed from their left hand side, he must have been seeing multiple balls because he never got close to winning what would have been a routine header for him.

Again, we might wonder if the reason the change wasn’t made straight away was because our only defensive option yesterday was the 19 year old Calum Chambers. Don’t get me wrong, he’s great and I love what he’s done so far, but perhaps if we’d had experienced, quality back-up the manager would have been more inclined to make the substitution straight away.

It’s understandable to be somewhat reluctant to throw on a lad who has only played three senior games in his short-career at centre-half, but we’ve needed a central defender all summer. It was no surprise to us that Vermaelen was leaving, and Chambers deployment there seems to have been something of a happy accident more than part of a grand plan.

Indeed, his inexperience showed when he went to ground in the box in the second half as a dangerous Leicester break caught us out. Ulloa, who scored the equaliser, should have punished us but thankfully put his shot wide. At the other end we have a looping Ramsey header easily saved and a Cazorla shot which went wide, but from an attacking point of view we were pretty turgid.

And overall I think that’s what we should be most concerned about. Sure, a better striker might well have made it easier and positively affected the way we played, but that we drew yesterday wasn’t just because of one position.

It seems as if the manager is struggling to find a way of getting all of his best players into the team and playing effectively. We have a world class number 10 who is being asked to play wide, an explosive talent like Alexis shunted out on the left like a common Arshavin, and a gaping hole up top that really does need to be filled.

We might well have got a bit lucky yesterday but I don’t think we can look at this as anything other than two points dropped.

Now, as you know today is Transfer Deadline Day and after the game Arsene said ‘We are very active’ when it comes to new arrivals. Quite what that means is anybody’s guess, but I would hope at the very least we’re after a centre-half and a forward of some description.

The defender is an absolute no-brainer. Yesterday showed that one small incident leaves us down to the bare bones in that area; and as I touched on above there are forward players the manager doesn’t seem to have a great deal of faith in, so let’s act on that. Move them on, bring in somebody who he can fit into this system of his.

I think a defensive midfielder might also be an option. I know that last week a centre-half and a defensive midfielder was where they were planning to buy, but the injury to Giroud added another layer to their needs. I guess we’ll just have to see what happens, but it’s impossible after seeing that display yesterday to look at us as serious contenders this season unless we look to improve the squad between now and 11pm.

It sounds kind of ludicrous to say that after just a couple of weeks of the season, but while I’m sure our performances will improve, I don’t think we’ve got the depth of quality to mount a genuine title challenge right now.

If you’re so inclined you can follow all the action on our transfer deadline day live blog. It updates automatically so you don’t have to refresh, and we’ll be there all day with news of our late moves for Julio Baptista and Sebastian Frey.

Let’s hope we get what we need. Analysis of that, and more, on tomorrow’s blog.