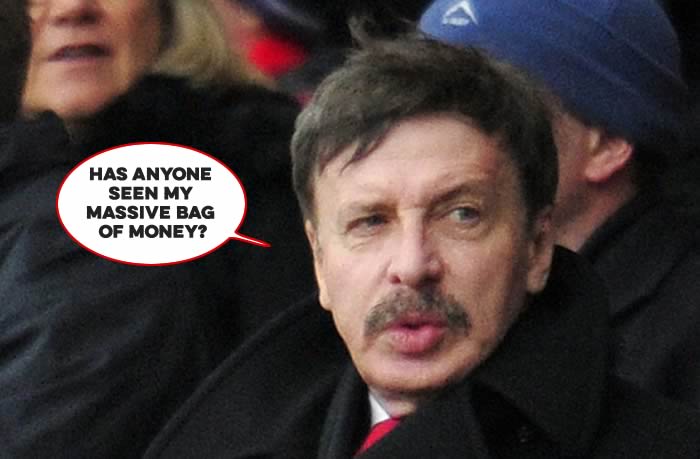 We’re in that strange lull between defeat and the next game. That the next game is a North London derby means the next couple of days are going to be jam-packed, but right now there’s not a lot happening.

There’s focus on Stan Kroenke and the issue of his company being paid £3m for ‘strategic and advisory services’. To some it’s a dividend by any other means, to others it’s a fairly standard piece of business which happens at companies all over the world.

Personally, I’m a bit suspicious, mostly because Kroenke has spoken in the past about how he sees it as normal that majority shareholders should take money from the clubs they own. Back in 2011 he spoke about the Glazers at Manchester United and said:

We have a whole different philosophy I think in the States, maybe, but I think it’s time for everybody to think a little bit. I think they ought to think about who invests in these clubs. ‘He [Glazer] took money out of the club. So what? [LA Lakers owner] Jerry Buss takes money out of his club. A lot of owners in the US do. No one ever says anything about it.

The thing about Kroenke is that it’s not ‘his’ club. He hasn’t invested in anything other than the shares. There’s been no Kroenke money pumped into the pot to boost our transfer funds or anything like that. So, for him to start siphoning money off is a bit of a worry.

Now, there may well be legitimate work being done by KSE LLC that Arsenal should pay for. The money isn’t going directly in Stan’s back pocket, but it’s the lack of clarity or transparency that causes people to be worried. If I own a company and send a payment to another company I own for ‘strategic and advisory services’ that’s broad enough to be just about anything.

And while I think the fact the amount he was paid was similar to the money generated by the 3% ticket price rise is probably coincidental, it’s a massive PR own goal not to be as open as possible about why that money was paid. Especially with the AGM just a few weeks away. Without that clarity, it looks as if Kroenke is doing what people feared – taking money out of the club.

Now, I’ve long been a supporter of the ‘self-sustaining’ model. I think it’s the right way for any business to operate and to have gone through some very difficult financial times to put ourselves in the position we’re in now is a testament to the long-term planning we put in place. With the restrictive deals needed to make it happen now out of the way, we’ve begun to reap the rewards of that.

We have manageable mortgage on our stadium, new commercial deals, new television revenue, a list of new commercial partners, the financial firepower to bring in players like Mesut Ozil and Alexis Sanchez, enormous match-day revenue – and the majority shareholder’s reaction to that has been to a) hike up ticket prices for no justifiable reason and b) pay his own company £3m for vague services rendered.

I’m all for the idea that we generate our own revenue rather than be in hock to an owner who artificially pumps in money to keep us competitive, but that revenue, and the plan that got us to the point where we’re financially solid, has to be invested back into the team or the infrastructure of the club. We didn’t go through everything we did just to enrich an already very, very rich man.

We have spent a lot this summer, no question, not to mention there’s work going on with the redevelopment of the Hale End academy and even plans to upgrade the London Colney training base. So on that basis it’s good to see the club have some of their priorities in order. I don’t even think the lack of a centre-half or the fabled DM was because we didn’t have the money or weren’t willing to spend it – but that doesn’t make it easier for people to accept when you’re on a knife edge because of a couple of injuries.

Yet, whatever you look at it, there was no justification for the price rise other than they knew they could. And Kroenke can pay one of his own companies £3m for ‘strategic and advisory services’ because he knows he can. And ultimately there’s little we can do about it. Talk of boycotts and giving up tickets if you don’t like it is all good and well but I don’t think there’s any other industry in which fans are held quite so captive by their own passion.

If your local cinema put the price of a ticket up to £30 you’d stop going, even if your favourite movie star was in the film. You have options. You can wait for the DVD, download a torrent, stream it online, but your team is your team, going to the Arsenal is part of your life and it’s the same for fans all over. The clubs know that the love fans have for their team generally outweighs any of the bad stuff they do.

Sure, for some there’ll come a breaking point, but a couple of percent on tickets here, and a surreptitious payment there, isn’t enough to do that. Elsewhere, you can back your disgracefully racist captain to the hilt and it won’t be enough for people to turn their backs on something so important and soon it’ll all be forgotten anyway.

That’s the nature of the game. We all know football is a business; that the people who own clubs do so for business, not philanthropic, reasons; that commercial concerns are by far and away the most important thing because revenue revenue revenue, and that fans are, ultimately the ones who pay the price. And so it is at Arsenal. 3% ticket rise, a chunk of money going from one Kroenke company to another, it’s all pretty grotty and quite unnecessary.

Yet we’ll keep coming back, and they know it.

Sold out! Thanks for all the interest – see you there.

Back tomorrow with an Arsecast and a look ahead to the North London derby on Saturday.