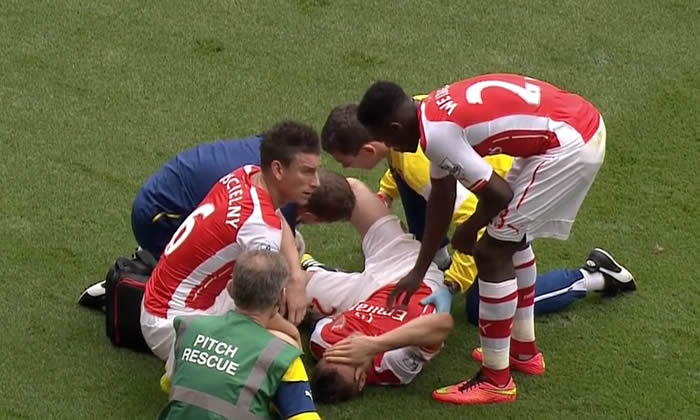 Morning all, it’s the start of another week and we’re well and truly into the thick of things now with a trip to Dortmund for our first Champions League tie (proper) of the season.

That means the team travelling today but obviously we go without Mathieu Debuchy whose injury on Saturday leaves us in a situation we really shouldn’t be in. The early reports suggest that he’s likely to miss around two months, having damaged ligaments, and considering the way he reacted that’s no surprise.

When you see player thump the ground you know they’ve done themselves some real damage. Debuchy even added in a few of Giroud’s patented finger flicks too – a gesture that’s no longer a signal of mild discomfort seeing as the last two occasions it’s been used have been the precursor to serious injury.

The in-game casualty list has been quite incredible this season. Gibbs pulled a hamstring against Palace; Arteta sprained his ankle away at Besiktas; Giroud has his leg broken by a football at Everton; Ozil turned an ankle against Leicester, and now Debuchy has been banjaxed against City.

It’s almost unprecedented. I certainly can’t remember a series of injuries like this before and for the most part you have to say it’s down to bad luck. Aside from the Gibbs hamstring one – which you could perhaps prevent with better conditioning/fitness – the others are the kind of injuries you can’t do much to avoid.

What you can’t put down to bad luck is having a situation where just one injury at the back leaves you having to take a massive gamble by using all three of your centre-halves at the same time. Calum Chambers is likely to deputise for Debuchy but – and I realise I’m looking at the worst case scenario here – another knock or suspension across the backline and we’re just about able to put a back four together.

I watched Laurent Koscielny mid-way through the second half on Saturday, while there was a break in play, stretch out his knee. Mertesacker had a word. It might have been just routine, but the first thing that came to my mind was that he’s feeling an ache or a niggle. For a person whose outlook is generally glass-half-full, my goblet of defensive perspective is most certainly half-empty. And there’s a dead wasp floating around in there somewhere.

Talk of a free agent seems unrealistic to me. If there was anyone good enough we’d surely have done it before the window closed, but even the idea of scratching around trying to find the least worst option from all the players no clubs in the world want is a sad indictment of our situation. Going into a season with just six defenders was always going to be a massive gamble, and now, just one injury later, it’s one that leaves us on the cusp of a real crisis.

I think the only option we have is to delve into the youth. Hector Bellerin has been training with the first team and can provide cover at right back, but again we come back to the central defensive issue. With a Capital One Cup game coming up – in which the manager simply cannot risk any of his senior defenders – it might be a chance for somebody like Isaac Hayden to show what he can do. I don’t really see what choice we have at this point.

It’ll be interesting to see if the manager is asked about this at his pre-Dortmund press conference because I’ve never understood the thinking in having a squad overloaded with forwards and midfielders yet so light at the back. I know people spoke about how Vermaelen hardly played last season, but I’ve often said that for a team that suffers from so many injuries that was one we got away with, and to hope for lightning to strike twice was always going to be fanciful.

Anyway, there’s really not very much we can do other than hope the defenders we do have stay fit and available, otherwise things might well become a real struggle. As for Carl Jenkinson, I doubt there’s an option to recall him. Season-long loans usually don’t have that clause, but even still he’s injured right now too (he’d fit right in etc etc).

On a more positive note, the manager has been speaking about the performance of Jack Wilshere against Man City, saying:

He looked dangerous in the first half as well because he has found his pace back. That for a while was not the case so I’m very happy. I’ve always told him the best way to answer your critics is on the pitch and he did it.

He was certainly the stand-out man on Saturday, running Lampard into the ground and a half-time substitution. The player who came on for the former Chelsea man was Samir Nasri, and Jack left him in no doubt as to who was in charge in there.

The key now is consistency. He’s got to do this week in, week out, because that’s the measure of a top player, but I’m sure his performance against City will give him a real confidence boost. At the start of the season we wondered where Jack would fit in with everyone available, and that it was down to him to make it difficult to the manager to leave him out. Which is exactly what he’s doing and it’s great to see.

Right, that’s about that for this morning. James and I will be recording the Arsecast Extra for you in a little while, so any questions you might have, fire them to us on Twitter @gunnerblog and @arseblog using the hashtag #arsecastextra and we’ll get to as many of them as we can during the show.