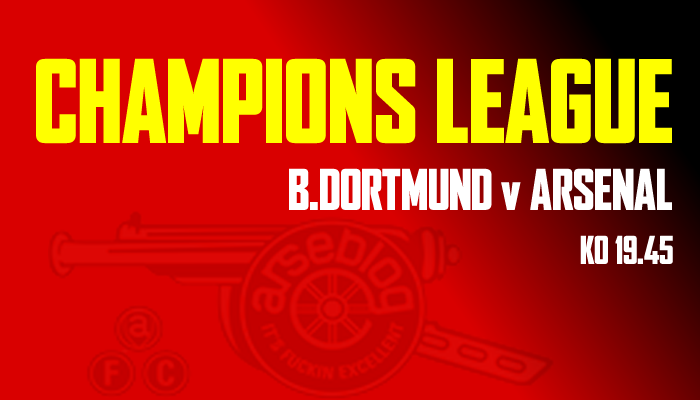 As we know from seasons past, Dortmund is not the easiest place to go. Tonight’s game becomes more of a challenge with the news that Nacho Monreal is out, with an injury that will hopefully be only short-term, while Calum Chambers is 50:50 due to tonsillitis, of all things.

It leaves us with three fully fit defenders as Kieran Gibbs will slot into the back four, and an anxious wait to see if Chambers can play. If not, it’ll be Hector Bellerin thrown in for a Champions League debut. Arsene Wenger says that the young Spaniard is ‘ready to play’, but then he kinda has to say that, doesn’t he?

Quite what cover we have on the bench is beyond me, although I suppose Flamini can play at full-back if needed, and maybe Francis Coquelin can do a job there, but let’s not pretend that’s anything other than a last resort. Arsene Wenger admitted that Debuchy’s injury put us ‘in a situation where we do not want more’, and also said, ‘Monreal can play centre back.’

Maybe he can, but he really shouldn’t. And anyway, right now he definitely can’t because he’s not even with the squad. It’s very hard not to worry about how another injury/suspension might affect the team, but I suppose there’s no point dwelling on it until such time as it happens. Until then we’ve got to hope what we’ve got is good enough, and fit enough, to do what we need to do.

As for the rest of the team, I suspect we’ll see Mikel Arteta back in the side ahead of Flamini, and after that the only decision I think he has to make is whether or not to bring Cazorla back into the team ahead of Mesut Ozil. He might even play both, depending on his plans for Danny Welbeck, this is one of those games where he might feel Alexis up front is the way to go, but I think the England man should keep his place.

On Ozil, the manager was quick to defend the German, saying:

He worked hard against Manchester City. You see a good Ozil when you watch the game again. Then you realise his timing, his quality of the pass and something you can be frustrated during the game but you must not overreact. When you watch the game in a cool manner, you see what a good player he is. I have so many offensive players. I give him freedom to play outside and inside and he likes that. It is not easy but Ozil is a team player and he takes it very well.

I’m very much of the opinion that Ozil situation is really quite simple: he’s a fantastic player who, right now, is playing without much confidence and belief and he has a style of play that makes it easy for people to doubt him. We can’t ignore the fact he’s not playing anywhere near as he can, nor that he’s struggling to make the kind of contribution we all want him to make, but I don’t think there’s any doubting his talent or ability.

The idea that he’s isolated or being misused on the left doesn’t really work for me either. He might start there, but as the manager said he’s got the freedom to play outside and inside, which you can see by his heat-maps against Leicester and Man City:

He’s not being restricted to an unfamiliar position, not being asked do anything he hasn’t done before, but just isn’t playing particularly well.

That said, it’s just four games into a new season, the manager says Ozil’s just about back at 100% fitness after the World Cup and the extended break, and it can take time to build relationships with new players. I think it’s a matter of patience with him, but the boss has to decide how best to get him back into form. Allow him to play through it, or sit out a game or two. There are obviously pros and cons to each approach, but that’s what he’s paid all the money for.

Ultimately, when things are that precarious at the back (and our defensive displays have been a bit of a worry so far), we need things to click at the other end of the pitch. Ozil was bought to be the creative hub of this team. I think he’s capable of being that player, but it would be very timely if he could find a bit of form sooner rather than later. Things can change very quickly remember: a couple of weeks ago all the question marks were over Jack Wilshere, now after his City performance they’re hanging over the German. I’m sure he’ll find the answers, but I do hope it’s soon.

Anyway, even if Dortmund have got injury problems of their own, this is going to be a real challenge this evening. We won there last season, of course, but it was a game we kinda nicked rather than dominated. I’d take the same again, but if we could now start to build a bit of momentum in terms of our performances I’d be even more pleased. There were a lot of positives to be taken from the way we played against Man City, more of that tonight would be good.

If you’re stuck in work and can’t see the game, we’ll have full live blog coverage for you, starting with team news from about an hour before kick-off. Check back later for a post with all the details, or simply bookmark our default live blog page and the updates will begin automatically.

And if you haven’t had a chance to listen yet, this week’s Arsecast Extra features discussion of Man City, our defensive issues, Ozil’s form, Wojciech Szczesny and loads more. Get your ears around it here.

Right, that’s that for now. Catch you later for the live blog. Until then.