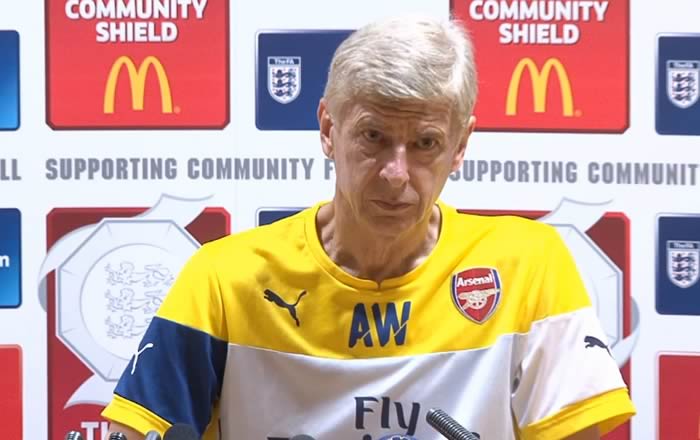 Lots going on this morning as Arsene Wenger met the press yesterday ahead of Sunday’s Community Shield against Man City.

We’ll start with the Thomas Vermaelen situation and the boss confirmed that he’s willing to sell the captain, admitted that Man Utd *might* (heh) be one of the clubs interested, but reiterated his desire is to move him somewhere outside of the Premier League. He said:

I’ve said since the start of pre-season that Thomas could leave us because he needs to play now. He had an outstanding attitude and behaviour but he’s in a position where it’s difficult to stand in his way if he finds an interesting opportunity. Ideally I would rather sell him to a club abroad.

So, with that in mind, it’s interesting that a delegation from Barcelona was in London yesterday to discuss the possibility of a signing with the club and, you would imagine, the player himself. The last thing he wants to do is go from the bench at Arsenal to the bench at Barcelona, and I suspect there have been assurances from United about him having regular first team football.

But if you looked at it realistically, at 28 years of age Barcelona looks a far more attractive proposition. Champions League football, playing with some of the best, albeit bitey and racist, forwards in the world, living in a very nice place and playing for one of the world’s biggest clubs. It’s not that United don’t have stature, it’s more than they’ve fallen from grace a little and have Tom Cleverley and Nani and rain.

The manager’s desire to sell him abroad is understandable too. He even touched on why he couldn’t do it in recent seasons because of the financial pressures, but now there’s no reason why we can’t do our best to move him to Spain even if that means we might take a slight hit in terms of how much of a fee we get.

As for the player himself, he’s been hugely professional throughout under very difficult circumstances. He hasn’t complained or kicked up when others surely would have. That said, I don’t think he’s been in any way badly treated by Arsenal because he had every chance to prove himself. What happened was he lost form, a better player took his place and played excellently, leaving him with little opportunity. That’s football.

The Catalan press this morning are a bit guarded. El Mundo talk of ‘optimism’ about his potential signing, while Sport say ‘things can change very quickly’ as Barcelona still have their eyes on Daniel Agger. Ultimately though, with Arsene saying we’d know ‘very soon’ who the bidders were, it looks like Vermaelen is off and that’s something we need to address.

The German players won’t be considered for the start of the Premier League season as they’re not due back until Monday from their post-World Cup break. Some people have asked why it’s so late, when Bayern’s contingent are already back in training and playing friendlies. First off, there’s a winter break in the Bundesliga, and I think this from the manager explains things further:

You have the choice – you get them back very quickly and you lose them in October, or you give them a needed rest to build them up again.

Given the outrage that would ensue from playing them immediately and losing them to injury, it seems sensible. He went on to say they should be available quickly though, due to the individual training regimes they’ll have when they return.

But with Vermaelen unlikely to play for us again, our central defensive depth is open to question. Mertesacker is behind schedule, Koscielny is still finding his way towards fitness and we’ve only got Calum Chambers to fill in there. When you consider the manager appears to be looking at his long-term future as defensive midfielder, it’s not ideal.

I don’t think Ignasi Miquel is ready, and if our summer has been about ensuring that the pieces of the puzzle that are lost (Ospina for Fabianski, Debuchy for Sagna etc) are replaced quickly and efficiently, let’s hope the same applies to the centre of our defence.

It’s the one area I think we’ve needed to address since the end of last season. With proper depth, I think we’re well set for a season in which we can have a real tilt domestically and in Europe. But we’re currently an injury/suspension away from playing an inexperienced young player or Nacho Monreal in that position, so I’m hopeful this is as obvious to the manager as it is to me and that things are already in place to address it.

He spoke about being open to do more transfer business though, talking about potential departures as well as players coming in:

It could happen, yes. I cannot give you any names specifically who will join us at the moment. We are not close to signing anybody and it will be the wrong information. We have still three-and-a-half weeks before the transfer market is closed and we are open to it.

I think the sheer number of players at our disposal right now means that any further arrivals will mean departures are inevitable. I suspect between now and August 31st we’ll see quite a few deals take place. Probably closer to the end of the window than some might like, but it’s hard to think all of our business is done.

In other snippets, Johan Djourou has completed his move to Hamburg after the German side sent payment via Western Union. Ivan forgot his passport when he went to pick up the cash and that’s what delayed things.

And with a reunion on Sunday for a number of ex-Arsenal players, the manager confirmed he did offer Bacary Sagna a three year deal but he chose, obviously, to see out his contract and go to City. It puts paid to some of the spin/criticism about his departure, but it’s clear we did everything we could to try and keep him, the decision to leave was the player’s.

Beyond that, I still loved everything he did for us in his time at the club and I’m glad he left on a high after Wembley in May. Now, he looks washed out in that sickly pale blue which really doesn’t suit anyone, and we’ve moved on. Let’s hope Debuchy can slot in and make Sagna’s departure one we don’t notice too much.

Finally, the draw for the Champions League qualifier takes place this morning, starting at 11am GMT but due to UEFA’s penchant for dragging things out, who knows when we’ll know. You can find out asap by following me on Twitter or keeping an eye on Arseblog News where we’ll post the draw as soon as it’s made.